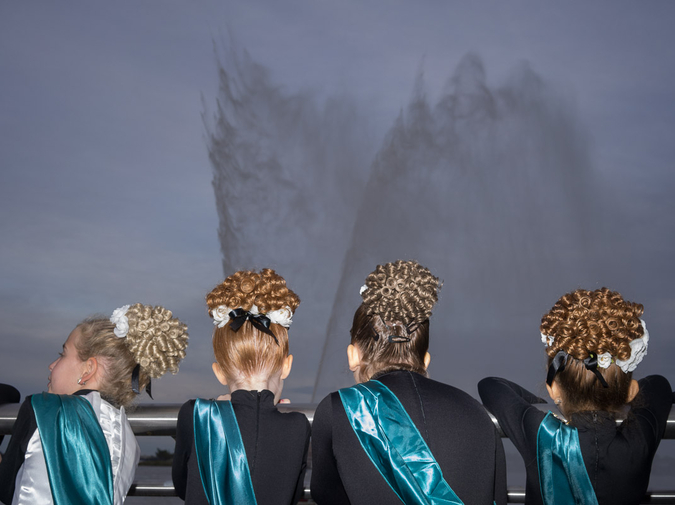 The boy is sprawled across the woman’s bed, his long body propped on one elbow, gesturing with his free hand. He is lecturing on some theory he learned in his undergraduate philosophy course as if it has just sprung from his budding, postadolescent mind. She wonders how much of this she is supposed to be taking in. She imagines leaving her desk, going back to bed, smoothing his soft hair. He will tilt his head—a quick, birdlike movement, bemusement in his features.

“What are you doing over there?” he asks.

She doesn’t answer. She has retreated to her design station; sketches of graphics are tacked onto the wall around a neon green print of an Eames chair. Her computer is opened away from him and she scrolls absently through her Facebook feed. A friend has posted a Madonna video with the caption BLAST FROM THE PAST!! Blinks of childhood memory, little else, but she clicks on the link, curious if it’s anything like she remembers. There was a kid in it. She thought he was cute at the time. On the computer, twangs of synthesizer music open to the billboard-sized image of naked women bordering the marquee of a movie theatre. The central figure’s breasts are vivid white bulbs. A boy, nine or ten years old, tries to enter the theatre’s peep show, but the old man in the box office shakes his finger in refusal.

“Who is this?” Head resting in his palm.

“Are you kidding?” the woman says, “It’s Madonna.”

The boy shrugs and runs a hand through his hair. It is glossy and dark, a jaunty wave across his forehead. The boy onscreen does the same.

“Are you gonna watch that whole thing?” he complains. “Come back to bed.” It is less inviting than plaintive, a tone reserved for siblings and mothers.

She continues looking at the screen. “Uh…minute.”

The boy exhales hard through his nose. He swings his legs over the side of the bed and walks toward the kitchen. She takes him in—long, sturdy limbs, narrow chest. They met in a coffee shop, each aging the other forward or backward according to their assumptions. She likes to think the attraction was based on intelligence, a passion for something that didn’t involve throwing a ball, but really it was because he’s beautiful—all wavy hair and dashing smile and preppy brights. He worked what she would come to think of as his glamour smile, bright-eyed and slightly mischievous, with a nearly imperceptible bat of eyelash. Even now that she knows him, the him for real, the one that sweats and pouts and wears bad clothes, that smile still works on her.

In the video, Madonna wears a black bustier, sheer stockings, and an androgynous platinum crop. Men in booths watch her writhe and twist on a shining stage. Her dark eyebrows arch, her cheekbones are wide and angular; she is muscle and pale flesh and bone. Outside, the kid is afraid of what he might see, and he covers his eyes with small hands.

The boy returns from the kitchen with a ziplock of marijuana and a packet of rolling papers. He lays back on the bed, the same position as before, and works on a joint.

The kid in the video dances suggestively in front of a mirror.

“Ew,” the woman says. “The kid in here’s dancing like he wants to fuck something.”

The boy smiles. “Maybe he does.”

She looks at him. “Are you serious?”

He doesn’t answer. The boy’s face is narrowed in concentration, his eyes small, catlike above broad cheekbones. His movements are jerky and imprecise. She thinks of the first times they were together—his puppy clumsiness. She wants to slide in next to him, run a hand along his side, kiss his hip. She rarely thinks about what he wants. Sometimes he pins her wrists above her head, but quickly releases them. She is always disappointed, wondering whether he got scared, or whether she didn’t struggle enough, do enough to make the game fun.

Onscreen, the patrons are restless and disappointed; Madonna has disappeared from the stage. The woman remembers dancing to this album when she was a little girl. They would shimmy around her friend’s basement using pool cues like microphones. That year, her friend was Madonna for Halloween, and she was jealous, begging her mom for a similar costume. Her mother frowned, “I don’t think that’s appropriate for your age.” No amount of whining would change her mother’s mind, and by the time the holiday came around, she had settled into her Guinevere costume with some contentment. But when she saw her friend’s crimped blond hair tied with an oversized bow, the frilled skirt and fingerless lace gloves, she felt that sting again. Afterward they spread themselves out on the carpet to sort and trade their candy.

“Here,” her friend said, trying to make her feel better, “I’ll show you how to be hot.” She stood at one end of the living room and cocked her pelvis, hands held limply in front of her. She swung her hips as she walked across the room, pouting, then turned slowly, hand on hip, and crossed the room again. The woman remembers being unsure of exactly what was meant by hot, but something in this display was electric, stirring in her own hips the pull of instinctive movement.

When the joint is ready, they lay in bed and smoke. The taste is green on her tongue and she likes the way his shitty weed makes her lungs feel full. She never takes more than one hit at a time, while he holds on to it, waving it in the air as he describes his percieved misconceptions of Adorno’s theories. Occasionally she will asks him a question, but it is superficial, just something to keep him talking. She’s sure he senses this, the way he senses her doubt at his understanding of these theories, even if she doesn’t understand them herself. He is practicing. One day he will be a professor, and his tone with his students will be as condescending as hers is with him. They will think he’s brilliant, and find excuses to come to his office hours, leaving the door open just a crack. He will have favorite students, girls whose looks are the right balance of studious and bohemian, but he will never touch them. She knows him at least this well.

She remembers the man she dated when she was the boy’s age. He was diminutive, and aged somewhat by drug use, but he had a youthful smile. They would stay up all night smoking cigarettes and talking about music, bands like the Pixies and Old ’97s, a sound they could both relate to, though for different reasons. When the sun came up she would drive him to the methadone clinic. He would disappear for days, sometimes weeks, and she would wonder who or what had distracted him, the ache of his absence felt deep into her bones. Then he would show up at her door with a bottle of wine and a movie rental, as if nothing had happened. It was always some foreign film she’d seen in his absence, and she wondered now what he had thought she did while he was away, if she disappeared, folded herself into a closet to wait for him.

They finish the joint, and the boy puts the roach in a coffee cup with a finger of water at the bottom.

“You wanna listen to some music?” he asks. “Not Madonna.”

“It’s okay, I don’t own any. You can put something on if you want.”

He walks to her computer and connects his iPod. The sound of bass emanates from her speakers.

“Is this rap?” she asks, wrinkling her nose.

He nods his head, and it turns into a bobbing motion, his tall awkward body moving to the music as he walks back to the bed.

He grabs her wrists and pins her arms to her torso, his weight pushing her into the bed. “Why?” he says. “Why why why why why why. Everybody likes this music.”

“So everybody wouldn’t like it if it weren’t good. It’s a multibillion dollar industry.”

Her wrists are beginning to hurt, and he holds her there, breathing heavily, his face close to hers. “Why do you like it so much?”

He exhales, waits one more moment, then releases her and lays back on the bed. “It’s honest,” he says. “I like the way it glorifies materialism.”

She prepares herself to laugh, but his expression is open and earnest. She is shocked, less by the fact that someone can think this way than by how wrong she may have been. He’ll probably leave academia. He’ll be an insurance agent or a mortgage broker, an angry Ford SUV driver, honking at children in the road, bitter about the smallness of his house, the dumpiness of his wife. If she runs into him ten years from now they will have nothing to talk about. She will be disgusted by his attitudes, him by the weight gathered around her waist, the lines around her eyes. A part of her already misses the playful, lighthearted person beside her now.

In the video, the little boy had his eyes closed and Madonna surprised him with a chaste kiss, her painted lips against his small ones. The woman wonders how many times they shot that scene, how strange it might feel to touch one’s lips to someone so tiny. Madonna was fully clothed by then, dressed much like the little boy. For the rest of the video they danced, though not suggestively; they played and teased and ran away from the theatre holding hands. The woman tells the boy about it.

He brings out the rolling and papers and weed again and listens patiently to her description.

“Not really,” he says, “it’s playing on people’s basic desires.”

More of his philosophies. She plays along.

“Well, I mean, everyone wants to have sex with children.”

Then, quietly: “Why would you say something like that?”

He shrugs. “Because it’s true.”

“I don’t believe that,” she says, but her heart is beating hard.

The boy’s face has darkened; he focuses entirely on the joint in his hands. She can’t imagine what he will look like when he is her age, cannot picture him fully formed. To her, he is a composition of senses, the smell of cigarettes and cologne, the texture of his skin, the reed and bass of his voice. Right now he is a dry rubbing sound of leaf against leaf, a parted bud of mouth that tongues the paper. She feels the need to ask him something real, but doesn’t know what. Instead she reaches forward, an involuntary motion, and smooths the back of his hair, but his expression is already obscured behind the cloud of smoke.

Roya Khatiblou’s work has appeared or is forthcoming in and Hayden’s Ferry Review, Passages North, and Phoebe and has been a finalist in Glimmer Train’s Very Short Fiction competition. She has an MFA in fiction from University of Illinois at Urbana-Champaign, where she served as both the Assistant Nonfiction and Fiction Editor of Ninth Letter, and an MA in fiction writing from Northwestern University.