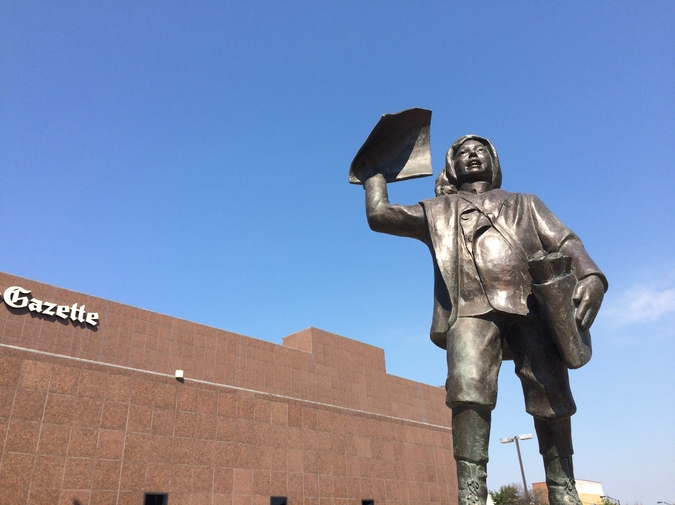 I write my college entrance essay on Andy Warhol. It’s 2009 and Ohio so it’s not as embarrassing as it seems now. It probably is, but no one tells me. I write about getting out and doing something big. No one says queer yet. On the last day of high school everyone storms the hallways and runs out of the building. Our whole lives are ahead of us.

I stay up late and watch Lockup and eat a frozen personal DiGiorno’s pepperoni pizza. I’m not hungry. I’m 17 and I gain weight but I don’t really notice. Everyone else notices but no one says anything. A girl in my class loses a lot of weight and my friend’s mom says, that must be so much healthier for her. I tell myself tomorrow I’m going to stop eating. I read Man Repeller and Into the Gloss and Cupcakes & Cashmere and the Sartorialist and Jak & Jil and Atlantic-Pacific and The Coveteur and Sincerely, Jules and Fashion Toast. My mom says the dress would look better five pounds lighter but it’s cute.

Julie and I gaze up at the ceiling in our dorm room. I’m 18 and I got out. We go to frat parties the first six nights we’re on campus. I wear the high-waisted tulip skirts and wedges and American Apparel deep vees I have. No one really tells me about going out clothes. We notice the glow-in-the-dark stars on the ceiling for the first time on our seventh night sleeping there. We drink jello shots and pink lemonade Burnett’s shots and sometimes Zelco shots chased with orange soda because that’s all that one frat ever has. It’s college and I’m having fun. My mom says, it was the best time of my life.

I’m 16 and I have a mom and I have a brother and I don’t have a dad anymore and I have a stepdad and I have a driver’s license. I have every issue of Vogue and Teen Vogue and Elle and Bazaar and Nylon and W from the past few years. I have an English teacher who thinks I’m a good writer and a red car and a lot of teachers who are football coaches who think John McCain will be a good president and a pair of ice skates.

I’m 16 and my school guidance counselor asks me if I’m ok. He is a football coach and he says he always sees me with my friends and I seem happy. I think I agree. I have perfect grades for all of high school but he doesn’t really notice. I’m 17 and I guess it’s time to think about college and my mom finds a list on the internet of good journalism schools and prints it out so I apply to those. I’m 18 and I go to the good journalism school with dining halls and classrooms and dorm rooms with glow-in-the-dark stars on the ceiling.

Matt says I ate a jumbo slice of pizza. Hannah says I told her the same story three times. Evan says I passed out with my head on the bar. I take their word for it. I’m 18 and I think I recognize that frat basement with the glow-in-the-dark spray paint on the walls.

I’m 21 and I’m good at waking up and drinking coffee and going to class and reporting and making deadline and finishing homework and going to internships and working at the paper. I’m good at getting fucked up. I’m good at having fun. Go go go. I’m best at forgetting. Remember Asher Roth? Remember that Kid Cudi Pursuit of Happiness remix?

I’m 28 and I got out and I haven’t done something big and I don’t have a lot of money and I use some of it to pay someone who tells me I didn’t get to be a teenager. She says there’s more scar tissue. That’s what Anthony Kiedis titled his memoir. I’m 17 and I don’t like Red Hot Chili Peppers but I have a subscription to Rolling Stone. They say it’s one of the great rock memoirs, same with Keith Richards’, where he says he snorted his dad’s ashes. Remember when Ozzy ate the bat’s head? I didn’t snort my dad’s ashes and I don’t think he had one of those Red Hot Chili Peppers shirts everyone had but he might have.

I’m 28 and I can’t remember the name of that fashion blogger so I look her up and find pictures of her wedding in Vanity Fair. It’s not real wedding pictures, it’s just Harry Winston sponcon. I think I wanted a diamond ring when I was 17. I think I wanted to be proposed to like Reese Witherspoon in Sweet Home Alabama. I think I wanted a wedding in a barn and to serve cupcakes instead of cake and to wear one of those 1940s netted veils. No, a flower crown. But I can’t be sure.