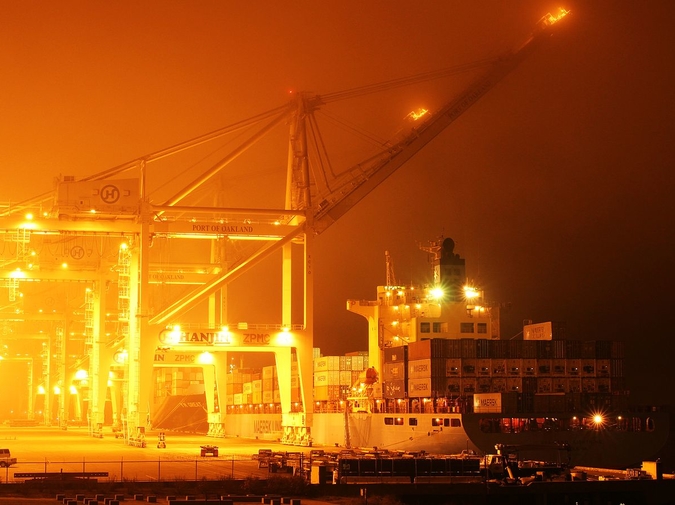 Ess saw it first at 2:03 AM. He hadn’t been sleeping, had instead gotten up for a glass of water when, looking out, he saw a dark figure standing beneath the streetlamp on the corner of 40th and West.

Even under the glow of the lamp the figure — the human, for it looked just like a person — remained stubbornly opaque, made entirely of shadow, only shifting now and again, flickering at the edges like a distant radio signal.

Ess reached up a hand to rub his eyes, hoping to clear his vision. At the same time his phone buzzed from the bedroom, and instinctively he turned toward the noise. When he looked back out the window, the figure across the street was gone.

Ess finished his glass of water and shuffled back to his room.

The cat was curled up in the middle of his bed looking very much like it didn’t want to be disturbed.

Ess picked up his phone and saw a message from Kiva, his on-again-off-again fuck buddy.

“u up?” the text read, followed by a little winky face.

Ess reached down and scratched the back of Cat’s neck. Cat stretched and yawned, curling his tongue pinkly. Ess had never been much for names. Cat was Cat, Mom was Mom, and if he ever had the misfortune of owning a dog it would invariably be named “Dog.” It couldn’t be helped.

Ess texted Kiva back. “On my way.”

Kiva lived down the street, only a few blocks. It was sheer convenience that had allowed their relationship, if you could call it that, to blossom. Friends of friends living in the same neighborhood in Oakland, it had felt in many ways inevitable. At first it had been like standing on the edge of a cliff, daring each other to be the first to dive off, whatever this was, but as the months passed and no one moved, it felt less and less like the beginning of something.

Ess shivered as he walked down the sidewalk. He was still in his pajamas, loose shorts and a t-shirt that brushed now and then against his body with the breeze. He had thrown on a jacket to ward off the early-morning/late-night chill. It was late September, which meant that the days were hot and the nights cool. Then again, most days in California were like that, he thought. Never be a weatherman.

Weather in Indiana had raged year-round. Snow drifts from the Great Lakes and tornadoes, summer thunderstorms crackling with electricity, early mornings in autumn so crisp you could walk outside and bite into them.

I’m getting nostalgic, Ess thought. In Indiana there was ice.

The neighborhood whispered breathlessly by him. Somewhere up or down the road someone was pushing a shopping cart, its wheels rattling and squeaking. On one side ran a chain-link fence, guarding rusted-out chassis and a bus up on cinderblocks. On the other side, separated only by the splintering river of road, walked the single-family houses fronted by dry gardens and wrought-iron fences.

Ess passed the neighborhood mini market, closed for the night. Nestled under the awning was the neighborhood homeless man. Ess saw him most days out in front of the church shaking a Big Gulp cup for change. Now the man was curled up under his signature beige comforter, recognizable by the untidy tufts of hair sticking up out of the top, his pate a circle of dark skin. Ess pulled his jacket tighter and walked on.

Kiva was waiting for him at her door wearing only a t-shirt.

Kiva lived alone in a basement apartment. She paid for it with what she called “soul-crushing software slavery,” an apathetic self-awareness that left him both fascinated and disturbed and somehow kept him coming back with each summon-by-text.

Inside, the apartment was luscious with philodendron and pothos. The bookshelves held various Hindu gods and goddesses in bronze alongside titles like “Measure What Matters” and “The Life-Changing Magic of Tidying Up”. On the wall was a framed map of San Francisco done in rose and gold.

“Thanks,” Ess said and cupped the piece to his lips. The smoke caught in his throat and he coughed.

“Big baby,” Kiva said and pulled him down to kiss her. He could taste the smoke in her mouth, her tongue pressing sharp and wet against his.

Entering Kiva was like entering her apartment: warm, indulgent, and utterly unfamiliar, as if each time was the first time. The press of flesh against flesh so shocking that it made him shudder. Ess waited until he was absolutely sure that she had orgasmed before allowing himself to climax. She had an IUD, but he pulled out anyway and finished into his hands.

“Sorry,” he said for no reason and went to clean himself up.

Afterwards he lay next to her, one arm across her belly, feeling the sweat dry from off his skin.

“What are you thinking about?” Kiva asked.

“I don’t know. Nothing,” he said then, “I saw something earlier.”

“It was like, I don’t know, a smudge or something. Like when something gets on your screen. But it was standing out by the streetlamp.”

“Or something,” he said.

Kiva was staring at him now, turned around to face him. Her deep brown eyes, her face so lively and alive.

“Are you happy?” Ess asked.

“You have absolutely zero control over my happiness,” she said and turned back around.

It found him again at the MacArthur BART station at 11:10AM. He was on his way to work, a coffee shop downtown, heading in for the closing shift when he saw the figure standing next to one of the concrete support pillars.

Usually the pillars were covered in graffiti or protest posters. When eighteen-year-old Nia Wilson had been murdered the year before, the whole station had transformed into a gravesite. Paintings, flowers, votives, and balloons blossoming and withering for weeks until one day Ess had turned the corner and seen a facilities worker sweeping it all away, bagging it all up in a crinkly black trash bag. Just like that.

Now as he turned the corner Ess saw the figure, dark like midnight, inscrutable in the daylight, a three-dimensional silhouette. It raised a hand in greeting.

Ess stopped short and someone ran into him from behind.

“Sorry,” he said at the same time the other person said, “Hey, watch it.”

Ess turned back and the figure was gone. He could see only a faded poster emblazoned with Nia Wilson’s face.

“Rest in Power,” the poster said.

Ess didn’t know how he had ended up in Oakland. People always asked, especially when they heard where he was from.

“Oh,” people liked to say, “what brought you out to California?”

The purpose of the question, Ess discovered, was two-fold: first, to confirm their belief that California was heaven on earth; and second, to confirm that anywhere else was hell.

Ess tended to confuse them by being honest.

The sun was down by the time Ess locked up the cafe. He walked to the BART station trying not to think about home. Home where words like “faggot” and “homo” came as easily and freely as the words “Jesus still loves you.” Home where killdeer nested in the stones of the driveway every spring, and Ess had worn garden gloves to move their tiny speckled eggs out of harm’s way.

It didn’t matter in the end, that Ess was mostly straight. At home, he would always be queer.

Ess approached the crosswalk and stopped. The man with the beige blanket was sitting on the wall out front of the church. His Big Gulp cup sat on the wall beside him. He was talking to someone. The dark figure sat on the wall, bent towards the homeless man, listening. It fuzzed at the edges, wavering in and out, in and out.

That night he texted Kiva.

“Hey,” he wrote. Then he erased it and typed out, “Are you awake?” He erased this too and finally sent “You up?”

“Do you believe in ghosts?” Ess asked when they had finished having sex.

“What?” Kiva asked. She was naked, brown and round and beautiful. Ess hated to see his skin next to hers, his arms corpse-like and pale next to her living body.

“I think sensitive people can feel echoes,” Kiva said. “But I don’t really think that’s the same as ghosts. Why?”

“Should I be worried?” Kiva asked. “Do you have a therapist or anything?”

He lay next to Kiva, staring into her beautiful and contented eyes.

“Okay, weirdo,” Kiva said. “Hey, I have to get up early tomorrow. Do you mind sleeping at your place?”

Ess walked home. Past the mini market store. Past the homeless man with the beige comforter. He unlocked his door. He walked up the stairs. He reached down and scratched Cat behind the ears. Cat purred.

Ess sat at the kitchen table and looked out at Oakland in the nighttime. Across the houses and apartment buildings and warehouses he could see the tip of the Transamerica Pyramid.

It was 3:44 AM when Ess saw the figure for the last time. Under the street lamp on the corner of 40th and West where it had first appeared. Ess didn’t put on shoes before leaving his apartment. He didn’t stop at the crosswalk even though the walk-sign was red.

The figure flickered and fuzzed. It turned its dark face towards Ess as he approached. Ess could smell burning ozone, fried electrical wires. The hairs on the back of his neck stood up.

Ess  wanted so much, then, to reach out a hand.

But inside he still carried the cold snap of Indiana winters. The weight of the other boys’ eyes as they pushed him farther and farther out onto the ice, closer and closer to where the ice was too thin.

“Please,” Ess said repeating himself from years ago. But the cold was growing up inside him, and he was pale, too pale, and the figure, that dark bit of eternity, was already turning away.

Laur A. Freymiller (previously published under Laura Freymiller) is a genderqueer writer originally from Indiana. They have been published by The Fabulist: Words & Art, BlanketSea, Entropy Magazine and recently won the 2019 COG: Page to Screen Award. They currently live in Oakland with their cat, Scout.