Notes on the difference between conclusive and inconclusive 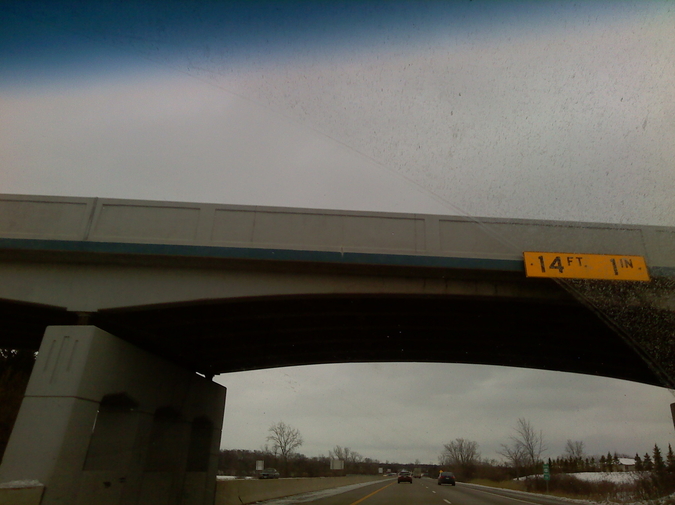 Who are the passengers, where are the railroad workers and their hand-pump trolley, what broke the bridge? Who feels like a train off the tracks, and who are the rubberneckers?

Here are four visions of inconclusivity, counter-chronologically by production date:

A broken off bridge— Painter Cabell Heyward depicted one in oil and sepia tones. The fractured trestle juts from the right of the canvas, and the train has just sped in-frame too: in this moment the locomotive is airborne yet still upright with the power of its momentum, and the ground is far, far below, off the canvas, and the plunge is recognizably painful, and such a shame.

It's a vignette full of clues but no ending, no assurances the way a docile still life presents camellias and pomegranates on a wooden table. Squat is known.

On another horizontal canvas that does not contain yet another landscape, a man is naked and placed in frame from the hips up, a roman bust in profile. He hefts a telescope to his eye. His head hair and armpit hair (this is the artist Max Miller’s self-portrait) are pelt-like, he has a five o'clock shadow. The telescope is represented not in brass and wood, but by a glowing white outline.

Augmented vision is still of our own making, no depiction is it.

Artist Blinky Palermo is a joke, a stark, German joke in museums, in a museum in Munich on the white walls his square canvases hang, solid black solid orange, whatever color he chose for that stretch. Minimalism, yes. It was just the guard and me and not a single woman artist on the walls. The guard grinned when I pointed that out.

X determines the duration of guardianship.

There are famous 1800s paintings of operating theaters, a convoluted naked body in the center of a pack of doctors with no masks or gloves on, and students seated in ascending rows—a lot of men standing on the shoulders of the men before them. Giants attempting to figure it out. Because—help.  In one piece a horrified wife cringes, close to her patient husband but rearing away, amongst many calm, interested faces.

So no conclusions from paintings or artists or doctors or technology—nor  inconclusions. Those frames mean nothing. Now I know and when I walk by a studio, I smell the oils. When I’m in the waiting room I refuse to sniff. Segues and borders give the appearance of conclusion.

A conclusion feels like a Thanksgiving feast, like traditional Tlingit artists depicting salmon in the bellies of roaring Alaskan sea lions. Here are four scenes of happenings of conclusion, in chronological order:

The man who is my husband grew up next to the ruins of the plantation of one of the largest slaveowners in South Carolina. Slave shacks were still standing in the 1970s, and out of one he took a drawer full of buttons from a treadle sewing machine table. Buttons from slave clothes, buttons from free people’s clothes. He stole from dead slaves—not their dead purchaser—and gave the drawer to his mother and soon enough those shacks were torn down: because: development.

Standing on a quieted, still, flat, windless beach once, I heard the conversation of two kayakers way out there. They were so far out I didn’t connect the sight of them to their words at first. Water is slick for sound, red-kayak-audio-target. My friend was digging up—fully licensed and for a global database—a sea turtle nest of ninety-two dud eggs deep in the sand. They had nothing to say. She’s a strong digger, bare handed.

A bridge collapsed in Moncks Corner this past spring near Charleston South Carolina and a man in a truck was speeding towards it while it was happening with a train speeding below too and he floored it and jumped the twenty foot gap like the Duke boys of Hazzard County. No time to think and a good conclusion.

I love myself  when I am crossing a bridge, and then again when I am looking like I won’t.

Lisa Annelouise Rentz lives in a three hundred year old village and is part of The Do No Harm Artists of South Carolina.