None of This is Okay 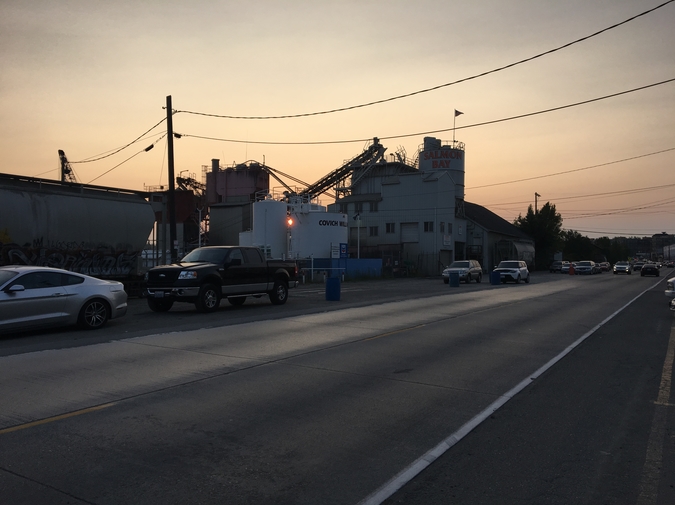 My son’s dad got pulled over a few months ago.

No answer. Maybe the wind was too loud.

The cop searched the car for a gun. The cop turned my son’s dad against the car, steadied his hands against the metal, searched him. The cop asked where he was going, where he lived.

The cop said nothing. Breath puffing into cold air.

A state highway patrol trooper, we’ll call him Dan, is on his fourth week on a ventilator. His wife leads around-the-clock vigils on Facebook. Prayer warriors, pray like you’ve never prayed before!

The pandemic began a year ago this week.

We live in a medium-sized southern city, in a group of low-income townhouses nestled in the richest zip code in the city. The schools are well-funded and diverse. There’s not a lot of crime. But cops are everywhere, parked, watching.

They followed our neighbors—I’ll call them Kirk and Bria—home a week ago. A sunny afternoon. We watched from our porch.

He’d run their tags out of boredom, turned out the car wasn’t registered. We watched him stick his head in the window, hover there for five minutes, ten, mask-less.

Dan texted his wife before going on the ventilator. She shares most things on Facebook, and she has disclosed this last message, too: I have to conquer this. I HAVE to make it home to you.

I dislike cops as a matter of routine, but when I read that, I thought, All right, Dan, let’s do this. Make it home.

Kirk and Bria asked the cop in their car window to speak to his captain.

“It’s not legal, running our tags for nothing.”

“Your car’s not registered.”

The cop returned to his car. Kirk and Bria’s teenage son came out to the porch, and they gestured at him through the windshield to go back inside.

After a long time, a second car pulled up. The captain leaned his head in their window, sporting a close shave, mask crumpled around his chin.

On Dan’s wife’s Facebook page, a night vigil for her husband filmed by helicopter or drone: a sea of police cars, firetrucks, ambulances in formation. Red and blue lights clattering, the scene overlayed with worship music, stirring hallelujahs. An entire city’s fleet, flashing for Dan.

The enormity of the gesture chokes me up; for a moment, size eclipses meaning. Before I wonder—

Who else has gone on life support, in this city of kudzu and reggaetón and sad, screeching trains? Did we light up the sky for them?

The cops searched another neighbor’s house a couple months ago. He’s an addict, but all he sells are oil changes in the parking lot. They had a warrant. They found nothing. He sat on the porch while they went through each room. Mask-less.

“This is some bullshit,” he said as they left.

They tipped their hats, cruised off into the night.

“That’s not legal,” Kirk and Bria insisted from their car.

The captain called for back-up. Four men in uniform conferred. According to their computer, Bria had missed a court appearance. “No,” she said, “I went yesterday. It must not be in the system yet.”

They handcuffed her anyway, took her downtown with flashing lights.

Dan’s wife writes on Facebook: They want to take him off life support, but I made them promise to wait till Monday. I believe in miracles. God will heal him and bring him home.

If my son’s dad had been infected, would there have been a vigil? Five hundred and fifty likes on the medical updates shared by the sheriff department’s Facebook page?

If Bria catches COVID at county jail, will there be a ventilator waiting for her?

Dan’s Facebook background is the black and white flag with the blue stripe.

You can write a whole essay without mentioning race, but it comes sizzling up from the page.

I’ve spent twelve months not posting on Facebook about cops not wearing masks, a vague worry about needing statistics to back up my claim.

I know this is not okay.

Dan’s wife is convinced that the ICU doctors are faithless. They don’t know God’s word, she writes. They say things don’t look good, but I rebuke that!

First Sgt. Chris Knox, of the North Carolina Highway Patrol, said that “our members, who are out in the field, when they are going to be within that six-foot range of someone, even outdoors, they are expected to have their mask on.”1 He said this in response to the many pictures surfacing of cops pulling people over without masks.

Eugene O’Donnell, former NYPD, said on the issue of masks that “the government has kicked the stuffing out of police…It’s not a real good time to ask police for anything.”2

I feel godless, writing this. Dan’s in the ICU, for God’s sake. Maybe he wasn’t like the others. Maybe he always wore his mask.

“Bria told the cops the fucking truth,” Kirk said. “She went to court yesterday. But they didn’t believe her.” He paced around the parking lot, hands behind his head.

Later the cops called and said she was right. They could see it in the system now. Kirk borrowed our car to bring her home.

I’m not sure if she knows that’s what she’s telling us. It’s easier to ask for prayers than condolences.

I think that to say anything, and have five, six, seven hundred people listen—

To tell a personal tragedy, and have the sheriff’s department amplify it—

To send your mourning up in red and blue flares, in hallelujahs cast from courthouse to Interstate to wild, wild forest—

That is really something.

Kirk and Bria can’t afford to register their car. They wave to us as they get in each morning.

Dan’s wife writes, They say it’s time to take him off life support.

She writes, But they don’t know MY God.

She writes, HE WILL BE HEALED AND BROUGHT HOME TO ME.

And everyone responds: Praying. Praying.

Sara Heise Graybeal earned an MFA in Fiction from the University of North Carolina at Greensboro. Her writing appears in The Rumpus, Beloit Fiction Journal, and Moon City Review.