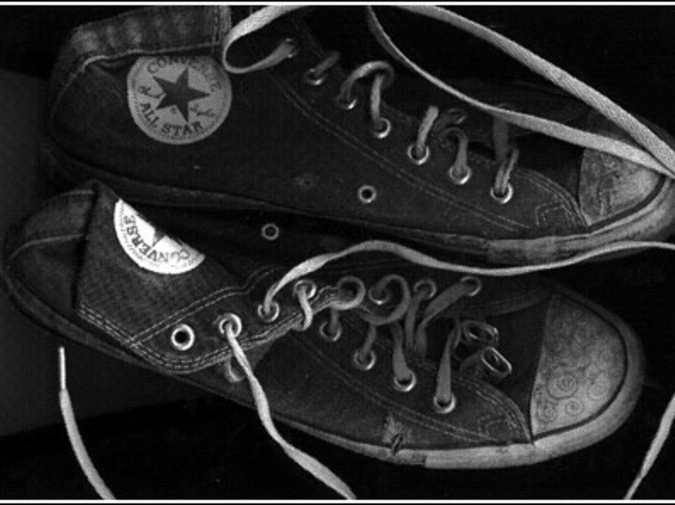 Up to our lunch room table came the newest, biggest loser in the ninth grade -- Intercom! We called him Intercom because he wore a big bolt-like hearing aid that, protruding from his ear, made him look like Frankenstein. He stood grinning at Anja and me, having a face covered with zits, a big head of wiry black hair, along with funny, mismatched clothes, including lime-green polyester pants. Everybody made fun of him, and, worse, he made fun of himself. He was horrible and sad in this way.

Then, I couldn't believe it -- Anja introduced him as her brother Henry! I looked at her. Impossible. No way. Anja, blonde, beautiful, definitely from Iowa, had been my girlfriend since first period. She was new to the school, too. But Intercom her brother? I mean, please, she was hot, and he was so weird and ugly.

I sat looking at her, waiting for the slightest sign of a joke. None came.

"So, you're lovesick for my sister?" Intercom said, shaking his head as he invited himself to a chair beside us. "You know what you should do?"

I shook my head cautiously.

"You should doo-doo in your hair!" he said, laughing.

As he went on to say more stupid things like that, Anja sat smiling at him, enjoying his little comedy act. I didn't get it. I just didn't get it! No girl in creation so pretty could have Intercom as her brother. There was something t-totally impossible about this moment.

As he helped himself to her fries, with no protest from her, he complained that his "sister" here, as he seemed to enjoy saying, had made his life hell these last few years by leaving it up to him to talk sense into all the boyfriends she had dumped. He gave me his best advice this way -- stay away from her!

Anja burst out laughing. I sat shaking my head. I had to glance around the cafeteria to see if anyone else was wondering what was wrong with this picture.

Then, after calling me turtle poop in the applesauce, he leaned over and tried to look down Anja's shirt, until she slapped him away.

"Oh, wow," he said, rolling his eyes, "there's nothing to see anyway."

Anja, ignoring him, put both elbows up on the table.

"Josh here's an artist," she was all too happy to brag.

"Oh, great," Intercom said, slapping his pimply forehead, "another artist. We have three in the family already. This makes four."

What, I was in their family now?

With Anja on one side of me and Intercom the school weirdo on the other, the two of them pulling this practical joke on me, all while the school was looking on, I began to feel out of body. In the whirl of the moment, I saw "Flabby Abby" Hargrove across the cafeteria, looking at me with her sour face. I couldn't look away fast enough.

Suddenly, Intercom snatched my spoon from me.

"She tell you where's she from?" he asked me, pointing it at Anja.

I shook my head.

I gave an uncertain nod.

You from Japan? Right. Was I supposed to laugh?

"Show him your scar," he said.

Anja pulled down her shirt collar down -- pulled it down far -- revealing a thin white scar that crossed her chest like the first half of a big X.

"Henry cut me," she said, kicking him under the table.

When he started giggling like a girl, enjoying the abuse, reality came crashing down. I didn't know how, but somehow they really were brother and sister. By some freaky genetic leap, they were. I looked down at my mutilated lima beans, the questions hitting together hard in my mind. In that second, Intercom reached across the table and tapped me on the head with my spoon.

I had to wonder if the boy was retarded.

"You need to stop playing with yourself."

I pretended to eat my lima beans with my fork, to distract myself from killing him.

He waited until I shook my head.

"You need to quit making green goat dung out of that," he said, nodding down at my lima bean paste.

His nonsense only got worse.

"Okay," he said, drumming the table with my spoon, "you wanna know what she and I really are?

Falling for it, I nodded.

"I'm getting her pregnant."

"I'm getting my other sisters pregnant, too."

She slapped at him, but only he enjoyed the abuse.

"Now, you want to get my sister pregnant, too -- but I've already gotten her pregnant!"

He pushed his chair back just as Anja cocked her arm.

"Anja here's pregnant by all six of my brothers!" he yelled out.

The spoon went flying. By the time it clanked to a rest over by the shoe of the assistant principal, the whole cafeteria was looking on.

I understood one thing now. No matter how far Anja's face and bod took her at this school, no matter how popular she became through school clubs, her "brother" would always hold her back. I had to admit I felt better about my chances with her now.

John Michael Cummings' short stories have appeared in more than seventy-five literary journals, including North American Review, Alaska Quarterly Review, and The Iowa Review. He has fiction forthcoming in The Kenyon Review. His novella The House of My Father was a finalist in the 2006 Miami University Novella Contest, and his short story "The Scratchboard Project" received an honorable mention in The Best American Short Stories 2007. His debut novel, The Night I Freed John Brown, is scheduled to be published by Penguin in May of 2008.

He lives in New York with his wife, Susan, and their cat, Sentry. For more information, visit him at
www.johnmichaelcummings.com.