Nelson from The Simpsons 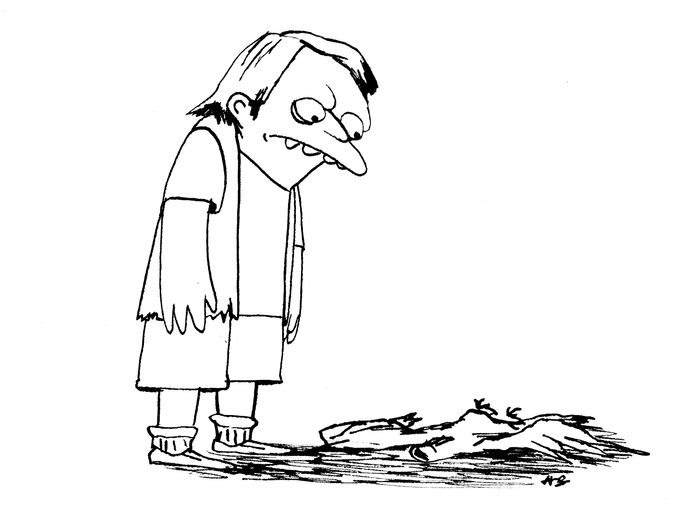 Nelson stands on the corner of two major intersections in Springfield. He stands inert, periodically blinking as if waiting for something to happen to him. Cars pass by and street lights flicker on and off for what seem like days. A bird descends from the sky and crash lands right in front of where Nelson is standing. Its bird wing is cut up and bent into a deformed, crooked shape. The bird is twitching on the floor a little and spinning, spinning in circles attempting to get up. The bird’s eye is scarred over as if it had been clawed out. Nelson bends over to look at the bird. He looks deep into the bird’s one functioning eye, which darts around avoiding Nelson. The sun is hot. The animal’s eyes look alien and alone. Nelson bends over to pick up the bird. When he bends over to pick it up, it flicks around quickly in a semi-circle because it is frightened of Nelson. Nelson, for a moment, is frightened of the bird but realises he is much larger than the bird and the bird is only scared. Nelson looks around the street corner he is on and sees only brightly lit colored objects outlined in black; everything is lit with an exaggerated electric color. Nelson takes stock of the objects he can see:  a rake with a comedic curve at the end someone could step on, a trashcan with a cover that looks like it might be used as a shield, some old cars, a cat shrieking on its tip toes, the head of Jebediah Springfield, a red wheelbarrow. Nelson walks over to the edge of the sidewalk and retrieves the red wheelbarrow. He wheels it over to the bird. Carefully, he uses a plastic bag to glove his hands and quickly picks up the bird and puts it in the wheelbarrow. His hand jerks away quickly because he feels squeamish handling the bird. Nelson walks to the front of the wheelbarrow and grabs the handle. He walks with it down the streets of Springfield for a long time.

Nelson gets tired and mumbles something out loud that sounds like something his father would say after coming home from work. It sounds like, “Sure...work..day..”, or something.

He looks down at the wheelbarrow and sees that it is slowly becoming covered with ants. He shoos the ants away and then scoops up the bird with both hands and continues walking.

Nelson comes across some of his friends while holding the bird. He sees his friend Jimbo.

“What are you holding?” Jimbo asks.

Nelson nods to his friend Jimbo and keeps walking. He walks for a bit and sees the movie theatre. He sees that the new Space Mutants movie is showing. He thinks for a moment about stopping to see the Space Mutants movie but then changes his mind. “Not tonight”, he thinks. He looks at the bird. The bird feels like it is getting softer and less warm. The bird is still twitching but seems to feel more safe in Nelson’s hands.

Nelson walks down a street in Springfield for a long time. He sees a sign that says “Now leaving Springfield.” He walks past a ravine, under an overpass, and past a fence where there are some rocks.. He puts the bird in the pocket of his windbreaker and climbs slowly. The bird twitches as if it is about to jump out to the ground but it never does.

Nelson climbs for a long time until he is on the highest hill in Springfield. The hill is so high that it looks like a mountain. There are some fluffy white clouds that pass by carrying what look titles that Nelson can barely make out. He walks to the edge of a cliff. It’s getting late and Nelson is starting to feel cold. He covers himself in his jacket and wraps it around his body. He sits down with the bird. It gets colder.

Nelson sits with the bird for a very long time.

The hills are beginning to change color. They are becoming more red. The sky above Springfield is getting darker and darker.

The sun above Springfield becomes a different color, reddish orange and burnt.

Below, all of the buildings in Springfield appear to be changing. People enter and exit the stores. People interact in many different ways and have many adventures.

Moe’s bar goes out of business and is shuttered. Someone posts a “For Rent” sign on it and boards it up. Someone opens up a new bar.

The Quick-E-Mart is bought out by a 7-11. Eventually, that too goes out of business.

The power plant has an accident and many people seem concerned and protest. The power plant is abandoned for many years and eventually the land is re-zoned.

The house where the Simpsons live is sold and a new family moves in. No one remembers what happened to the Simpsons, or if they left Springfield. Someone says they heard Maggie moved to New York.

Springfield Elementary closes down and is reopened as a charter school.

Nelson sits at the top of the hill holding the bird.

Nelson is a very old man now. He has a beard that is white with specks of food and detritus in it. He has bags around his eyes and his clothing is tattered.

A wind picks up and Nelson closes his eyes and thinks about being a boy a very long time ago and the friends he made. He remembers laughing.

Nelson stands up and walks to the edge of the cliff. The bird is twitching and its wing is moving. The wind is picking up.

The bird stands up.

Nelson walks forward and holds his palm out. The bird moves both its wings and looks ready to leave Nelson’s palm.

“I loved you in my own way”, Nelson says to the bird.

“Nothing was ever good enough. But we made a home here once.” Nelson says to the bird.

The bird jumps up from Nelson’s hand and flutters about for a while in the wind and then flutters into the sky. It is dragged by the wind for a bit, but then finds its footing and spirals around in circles a little.

“Haha”, says the bird, as it disappears over the cliff, dips into a valley, and flies over, and out of Springfield.

Roshan Abraham lives in NY but would prefer to live in a lighthouse. He can be found at kidontology.tumblr.com and on twitter: @yanatone.