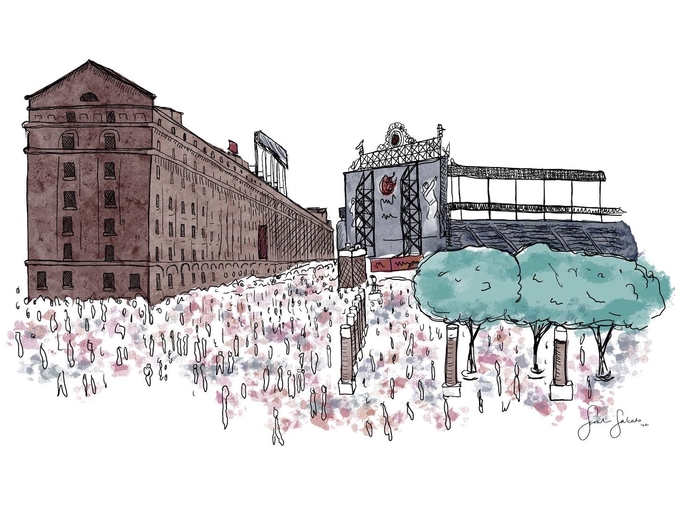 I pause from scraping frost
off the car, and watch my gray
emissions wisp away

into the chill. I miss strict
seasons, and knowing
what to wear. Last week, it was 72.

When will summer begin
to freeze, and canceled baseball games
are consoled with snowball fights?

I loved it when I was young.
I try to sell them on the experience,
the beer, and the sound of humans

snuffing the lights of summer.
I admit that it’s boring.
I remind them of the beer.

I tell them it’s an honest fact
that people look their prettiest at Camden Yards.
I talk about the thrill of supposed bums

snatching shame back from the night,
and spinning it into mud-rubbed glory.
When all else fails, I explain

how I love the romance of it all.
A game could go on forever,
forever, isn’t that beautiful!

I’m always sad it doesn’t
matter to them.
But it will end, they say,

everything has to end.
My breath rattles heavy with chill,
and my car’s chemicals quail

upward like a fungoed curve.
Christ, they’re right, I think.
Even the best things end.

Tim Neil is from Baltimore, MD. As a lifelong Orioles fan, Tim has a soft spot for losing seasons. They believe Dan Duquette tanked the Orioles 2014-2015 offseason because he thought he was going to Toronto, and-—it does not matter. Tim's work has appeared in Poet Lore, The Fiddlehead, and Los Angeles Review, among others. Their first collection, Self-Titled by Alien, will be published by Milk Carton Press in May of 2022.