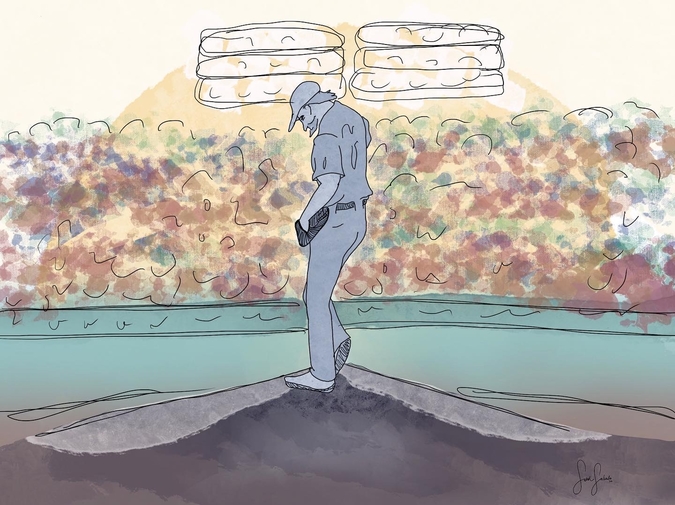 Two things are clear to Ava: It’s time to end things with Nico, and Thad Worley might not make it out of the first inning.

He’s next to her in the left field bleachers chewing on a hang nail and watching the veteran go again for the rosin bag. Pitching is like that. You can be a Cy Young winner and still find, on any given night, your talents have abandoned you. She won’t do it this evening, not after they’ve both made an effort to come to the game. But soon. She’s always been firm in her decisions.

Worley’s talents haven’t been there for him much this year. The fan base that once adored him as a cocky kid throwing lightning bolts has been turning on him all season long. She hears boos. Two runs already in, and she feels a surge of wistful affection for Nico. She’s conscious of how she’ll remember this night even though it’s hardly begun. There will be a lull in the middle innings, a foul pop that looks like it’s right at them but isn’t. An entire inning spent walking through the wide cement corridors, the guts of the stadium. She loves baseball because it doesn’t try to win you over. When she was growing up, even though her family had two televisions, her dad insisted on listening to games on the radio. Sometimes she sat with him in his study, knowing it made her seem mature, something her older brother Shane never would have had the patience for. Her dad, saying nothing, drinking root beer on ice. She thought his favorite moments were when the game was slow and the announcers fell silent for 20, maybe even 30 seconds, and this quiet—broken only by faint crowd noise—seemed powerful enough to impose its calm throughout the whole world, and maybe even their home.

Worley escapes the top of the first through sheer determination and Nico throws one corduroyed leg over the other. There’s rain in the air, September chill. She follows his eyes to the other side of the park and blinks five times before she understands that she will not be able to bring the out-of-town scoreboard into focus. She is five days shy of her 29th birthday and she needs glasses. She realizes that she’ll celebrate alone.

She’ll remember his refusal to order from any of the concession stands, even when she argues that paying too much for a Miller Lite and a bag of peanuts is part of the experience. She’ll remember the wispy shell casings on her fingers as he neither eats nor drinks nor checks his phone, chatting idly with a mother of two on his right side, running his hands through his thick hair.

The wind is whipping down from the second deck now and he doesn’t seem particularly cold or bored or wary or in love with her, despite what he says. It’s not that he doesn’t mean anything to her—it’s just that it doesn’t matter now. A man in the row in front of them is keeping score and talking to himself. He’s carefully shaded in those two little diamonds. He marks two more the next time the visitors bat, but the manager leaves Worley in to try and finish the inning.

There are twenty-some thousand people at the park and yet she’ll remember the intimacy of the evening. She’ll remember him dangling his arm against her thigh, tracing an abstract shape on her cold skin.

It feels wrong, then, not to tell him right away. Not to give him a chance to place the night in context before it’s over. “Put him in the books!” the man keeping score yells, and Worley strikes out the shortstop with a curveball that skips over home plate.

“Hey,” she begins. “I think this should be our last night together.”

Somewhere behind her a man is shouting vicious obscenities and another is trying to calm him down. She doesn’t need to turn around to imagine the spittle leaping from the man’s mouth. Like he’s been put on this earth to rage. But not Nico, she reminds herself. Not Nico, who sits there, absorbing the thing she’s said, watching two fans tricycle around the bases between innings.

“And here I thought I was an exception” is all he ends up saying, maybe more to himself than to her. When the rain starts a few moments later, he stands to go.

She waits alone on the mezzanine for the delay to end, watching the curtains of pale rain in the million-watt lights. She wonders if she’ll ever see him again. But when they pull the tarp off half an hour later, he’s back in his seat, and Worley still, miraculously, on the mound.

He looks sideways at her, kind of smirking, and that’s all they say about it.

Worley’s latched onto something and the other team starts going in order. The fans who stayed through the rain begin to rally behind him, and when he strikes out back-to-back hitters, even Nico offers her a high five, clasping her hand for a second longer than he has to.

In the middle of the sixth, the kiss cam seeks out couples still in attendance, and it seems inevitable it will find them. They both tense up, stare in opposite directions. They are ultimately spared. But when Worley himself bloops an improbable double into left field, pushing the tying run across the plate, she stands with the rest of the fans and then kisses him, full on the mouth, because the night is not over yet.

She’ll remember that ovation as an echo of the way it once was, the way they doted on him when he was young. Only the man keeping score stays seated, his book still splotched with rain drops big as quarters. When the noise finally subsides, she again remembers the games in her dad’s study. She’d gone in there to escape Shane’s frantic chaos, his careening, violent moods, and it eventually occurred to her that her dad had done the same.

Worley has another clean inning, and then gets two quick outs before fatigue finally gets him. The crowd groans when the manager begins his slow walk from the dugout, ending the veteran’s night after nearly 8 innings and a rain delay. Nico looks at her again—maybe he believes his fate is bound up with the pitcher’s. But all she feels is a kind of liberation.

She’s always been like that, hasn’t she? Programmed that way. Ready to finish something rather than let it linger. Ready for the closure of an ending, any ending.

Like when the police came by her childhood home late that one night, and she and her mom and her dad knew what the officer would tell them even before he reached the door. Hadn’t she felt it then, too? The unmistakable brace of relief.

Her brother’s little box all filled in, his line settled.

Travis Price is a fiction writer and translator of Spanish whose work has appeared in The Massachusetts Review, pioneertown, Latin American
Literature Today, and jmww, among other publications. He is a lifelong fan of the team now known as the Cleveland Guardians. He lives in Philadelphia.