My God This Piece of Shit World Sure is Pretty Sometimes: An Interview with Kevin Maloney 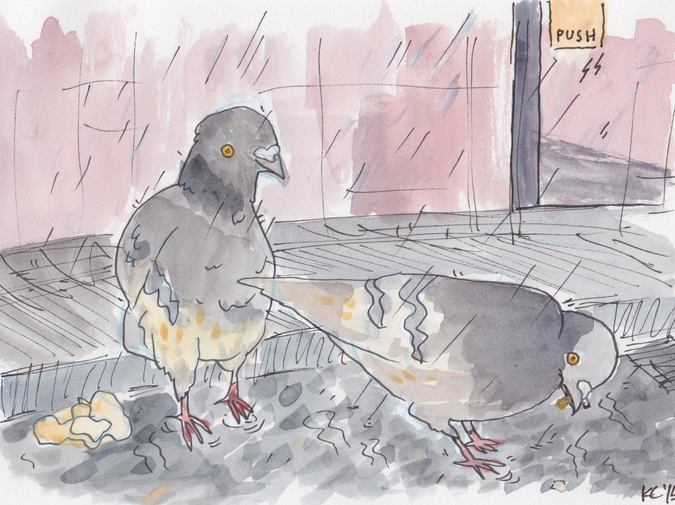 I began reading a PDF of Cult of Loretta, but stopped a few pages in. I’d already, by instinct, picked up the pen beside me several times. There were sentences to underline, pages to dog-ear. What I needed was a physical copy—something to return to with notes, etc. for next time I wanted to write half the story Kevin Maloney does. I went to Amazon, submitted my order, and began to wait.

Every day felt like the day my goddamn copy of Cult of Loretta should arrive. But it didn’t until almost two weeks later and, when it did, it looked like it had been through every circle of hell, twice. It was nothing I wouldn’t do myself—I got hooked, kept it shoved in my apron at work, opened it on secret/frequent bathroom breaks.

I read it just about everywhere. Cult of Loretta became my dirty catharsis—the murky reassurance of a strange, grotesque beauty in the midst of decline. A hairpin dopamine trigger. When I later described the experience—because that’s exactly what it is, “an experience”—of reading Maloney to a friend, I think I said something like “If you aren’t on drugs when you start, you will be. Or will feel like you are.” Then, to a less ‘literary’ friend, someone who exists sort of on the periphery of everything except drugs, which he’s very much centered in, I described it, I think, as “a literary I-Doser.”

They, too, are now Kevin Maloney fans—“an arrow through the bull’s-eye of Jesus.” But my pitches underplay Maloney’s greatest feats. It should have sufficed to say that Cult of Loretta, from beginning to end, is one of the best books I’ve read in years—not ceasing for one second in its drug-addled madness to both disturb and satisfy. It should have been enough to admit I, too, not long after meeting Loretta, became obsessed.

Curious how the hell Kevin did what he did, I messaged him on Facebook and asked if he’d be interested in talking about the book.

Nelson, discussing the fictional drug “screw,” calls it “the strongest drug in the world.” Go on…

When I was 18, I smoked pot almost every day. I’d smoke out of an apple and walk around my neighborhood after school listening to John Frusciante on my Walkman, just tripping out on music and the beauty of the neighborhood where I grew up. Later I got into mushrooms and had incredible experiences. One minute my friends and I would be dividing up stems and caps into little piles; the next I was on my hands and knees, crying because the rhododendrons were so beautiful. But things took a dark turn. A friend of mine got into Terence McKenna and ate a bag of mushrooms by himself in a black room while listening to Tool all night. He had a bad trip and eventually became schizophrenic. Other friends got into synthetic opiates, uppers, downers… really destructive shit. I wanted to capture the power and darkness of those experiences in Cult of Loretta, but I didn’t want to write a straightforward drug novel. So I made up a drug that gives you the ultimate high, followed by the ultimate darkness. A drug so powerful you literally tear yourself apart.

I feel like you nailed Portland as a character. What I mean is, Portland quickly becomes just as familiar as, say, Nelson. Did you need for people to understand Portland in the same context as you?

Thanks. I really appreciate that. Yeah, I love books where setting is so integral to the story that you can’t imagine it happening anywhere else. What Bret Easton Ellis’ Less Than Zero did for L.A. or Flannery O’Connor’s A Good Man is Hard to Find did for rural Georgia…. I wanted to do something like that for the Portland of my youth. Portland is changing so much right now. Developers are ripping down hundred-year-old churches and building condos everywhere. There’s this massive influx of people from out of state, and their only experience of the city is the twee wonderland depicted in Portlandia. I wanted to capture the darkness of the old city. The endless rain and desperation. 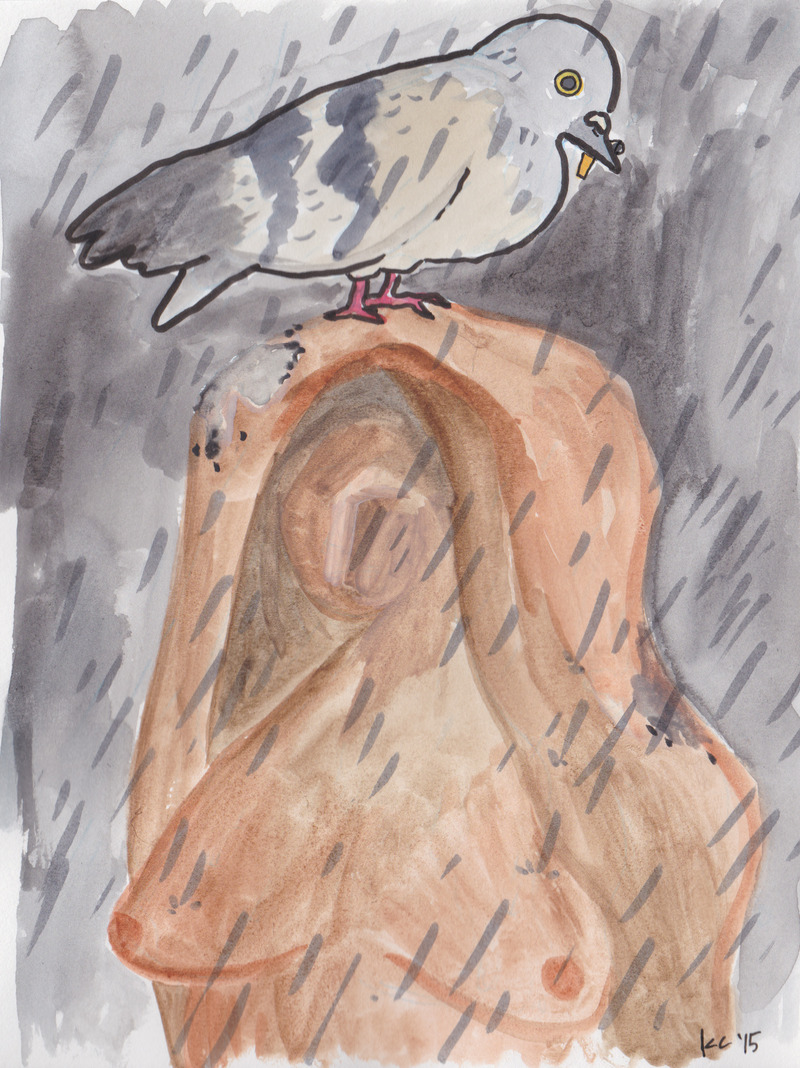 The first time I read one of your stories—“No-No” in Hobart early ‘14—I noticed an interesting move. It was quick, clever, and hilarious no matter how many times I read it. I was happy to see it again in CoL—I’d like to call it the Malonean epiphany. “Everybody looks at me like I’m on drugs. A drop of rain hits my eyeball and I realize I am on drugs.” Most of the time, it’s realizing the obvious. Is this a natural inclination? A sort of grounding for the reader?

I’ve never quite thought about it like that, but yeah—I love writing stories where the protagonist is totally baffled by the world around him. Maybe because I’ve felt like that ever since I was a kid about pretty much everything: birth, death, the universe, Jesus, the Easter Bunny. I mean, it’s all just so damn strange. One thing that psychedelic drugs do is rip your complacency away and make the world appear exactly how magical it really is. You look up at the sky and you’re like, “Holy shit! Stars!” They’re everywhere and they’re a million times more real than a Taco Bell commercial on Hulu. We’re so good at distracting ourselves that reality feels like science fiction and science fiction feels like reality. I want my characters to be stunned by the world, to stand before it trembling in awe.

I’m just trying to find out what makes this book so effective on so many different levels. You know, it’s probably more accurate to call it a drug-like narrative than a drug narrative, which seems kind of corny, but reading it feels like one of those really ambivalent highs where everything feels incredibly great and incredibly close to dead at the same time. How’d you make an ugly world so beautiful?

I think Cult of Loretta is more of a philosophical novel than a drug novel. The first draft had more explicit references to western philosophy, but thankfully my editor suggested I cut those sections, so the existential crisis is just below the surface. Screw is an agent of obsession and desperation, but why is Nelson so obsessed? I think it’s because he’s looking for meaning in a meaningless world. That’s what I was really trying to convey—the manic-depression of being a teenager. One minute you think you have it all figured out and the next you have nothing. You have less than nothing. You’re just this ball of pain walking around, feeling everybody else’s pain. And you’re like, “So I’m supposed to get a job and a house and watch TV for the rest of my life and die and that’s it?” It feels like this cosmic joke that isn’t funny at all. Teenagers, way more than adults, live with their eyes wide open. They see everything, and that’s what the world is… fucked up and beautiful.

Loretta first appears in detail in a chapter called “Miss Misery,” which of course mentions Elliott Smith. Connections between the character and the song are ubiquitous. Did you have the song in mind when creating Loretta’s character?

Loretta came first. I wrote a short story called “Cult of Loretta” that appeared on Monkeybicycle in 2013. That story is set in the present, but there’s an implied backstory—a shared adolescence where everyone was in love with a girl named Loretta. I started wondering about that backstory and wrote a few short chapters. When I introduced Elliott Smith into the narrative, the book just took off. Smith’s career was so bound up with Portland. When he played “Miss Misery” at Oscars, it felt like Portland standing there in a white suit. I don’t think that’s why so many people started moving here, but that’s when the city’s identity began to change. That performance is the fulcrum of Cult of Loretta—it begins the book and divides it in half. Also, “Miss Misery” sounds like it could be written about Loretta, and the album Either/Or is named after a philosophical text by Søren Kierkegaard, so it all just sort of came together.

What’s your favorite Elliott Smith song and why?

“Everything Means Nothing To Me.” I love the bigness of that song, the unapologetic melancholy. It could be Nelson’s anthem.

The next chapter is “Sitting in a Bathtub with Jean-Paul Sartre.” Was this ever, in your life, a real song?

I played in a few different bands back in high school but we mostly played Jimi Hendrix and Red Hot Chili Pepper covers. So no—that wasn’t a real song, but my friends and I did start a philosophy club at our high school. About fifteen of us would meet once a week and talk about God and life and morality. We were big on the existentialists, Camus and Sartre in particular. If we’d had our shit together that’s the kind of song we would have written.

Deeper in the text, the drug usage begins to occur between the lines. The narrative is jolted; the surreal, hallucinatory visions are no longer primed. It becomes disorientation, as usual. (That said, somewhere around this time I found myself unable to put the book down; bathroom breaks at work were getting sketchy.) Addiction, again, affects the reader as well. Was this move more conscious or intuitive?

There’s a scene where Nelson pulls off the freeway in a car full of stolen medical equipment. A homeless man is standing on the onramp holding a sign that says: “DOING WELL / EVERYTHING FINE.” He hands Nelson a statue of the Virgin Mary. Up to that point, Nelson has been a fairly reliable narrator, but for the rest of the novel, he’s in pretty bad shape. People die and come back to life. He has delusions of grandeur. It was the most fun part of the book to write. I wrote the entire manuscript in 11 days, and the later chapters just flew out of me. I narrated scenes into my iPhone while stuck in rush hour traffic. I had no idea where the book was going. I think the frenzied feeling you’re picking up on as a reader is exactly what I was feeling as a writer. I just had this sense of—man, anything can happen.

Do you have any last words?

I want to thank Hobart for all the support you’ve given me, in particular Aaron Burch. You guys have really encouraged my weirdness. You’re the litmus test for my writing. If I write a new story and can envision it on Hobart, I know it’s sufficiently weird and funny and tender in the right places. I’ll take you guys over The New Yorker any day.

Order Cult of Loretta here. For more information on Kevin’s Maloney, visit his website at http://www.kevinmaloney.net.

Pat Siebel is the Interviews Editor at Hobart. He lives in Christiansburg, Virginia where he's an MFA candidate at Virginia Tech. Twitter: @patksiebel

Killian Czuba writes and draws. She's the art director for Barrelhouse and founder of The Apiary. Say hi on Twitter @killianczuba.