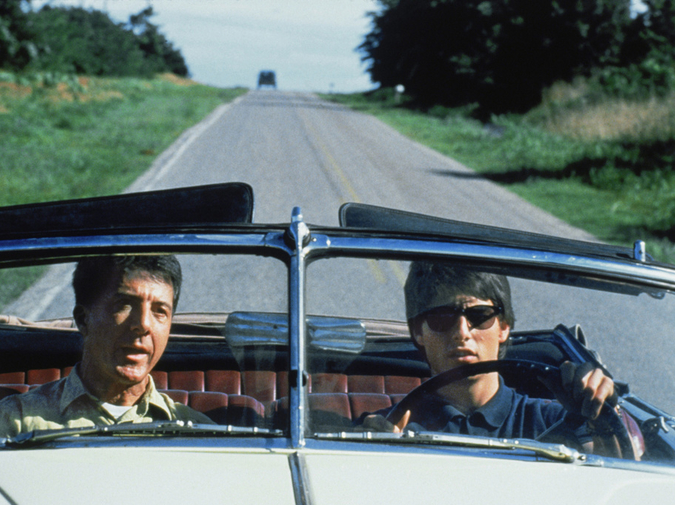 It’s the second month of eighth grade when you decide Tom Cruise is your favorite actor. You’re watching Rain Man in a class called Current Events, for a unit on mental illness. As many times as you’ve seen Top Gun and Cocktail, they are more your parents’ movies, but your parents haven’t yet seen Rain Man. You feel worldly for liking the most recent Oscar winner for Best Picture, but also cool because it stars Tom Cruise.

Your senior year of high school, Mrs. Jones assigns the final presentation for English and Rain Man comes immediately to mind. You just received the VHS for Christmas, the first movie you’ve ever owned. After losing your sight the previous year, you’ve been returning to your favorite movies, the ones you’ve seen enough times that you can watch them without your eyes.

“Choose a song, a movie, a poem—anything at all,” Mrs. Jones elaborates, “and explain how its structure supports its meaning.”

In Rain Man, the road trip is a journey of self-discovery for Tom Cruise, who transforms from callous businessman to willing caretaker of the autistic brother he never knew he had. A heated negotiation in the opening minutes establishes Cruise as the cocky upstart he has played in his other films. “The fucking EPA,” he shouts, and your dad, who has reached for this expletive with some regularity over the years, expresses misgivings about including this scene in your presentation.

Although Dustin Hoffman received his second Oscar for playing the autistic savant, Cruise’s is the more dynamic performance. Hoffman’s might be the title role, but Cruise drives the action, figuratively and literally, piloting their late father’s Buick Roadmaster convertible from Cincinnati to Los Angeles. Hoffman swears he is an excellent driver, but admits he has only ever driven “slow on the driveway.”

Like Hoffman’s character, you can no longer drive. Have your classmates noticed your absence from the school parking lot? Do they know why? Some lingering peripheral vision lets you pretend you’re the same person, but anyone near your desk must have seen your special notebook paper, noticed how you aren’t in class for quizzes and tests. Your two closest friends know, but the friends with whom you used to sit in the library and cafeteria rarely speak to you.

Any description of Tom Cruise must begin with the gleaming, eye-crinkling smile. It seems to say, I know the secret to having fun. It says, maybe you know something I don’t know, but I don’t give a shit because I know everything I need to know.

Tom Cruise is one of life’s winners. He felt the need, the need for speed, and singlehandedly saved America from those Soviet planes, or something—honestly you never understood what was going on in the second half of Top Gun. In A Few Good Men, Jack Nicholson told Tom Cruise he couldn’t handle the truth, but Jack Nicholson was quite wrong.

Some critics complain that Tom Cruise only plays variations of Tom Cruise, but maybe no role can contain his outsized charisma. The archetypal Cruise hero takes shape in 1983’s Risky Business. By the end of the film, Cruise’s high school senior has found romance, riches, and admission to the Ivy League by turning his house into a brothel while his parents are away. Note the iconic Ray-Bans Cruise dons in the final scene, a symbol of his imperviousness to whatever life throws at him.

Once you’re in college, sunglasses prove the perfect accessory for avoiding eye contact while walking between buildings. You’re not really capable of eye contact, but now you don’t have to pretend. It’s a shame only blind people and celebrities get to wear sunglasses indoors.

After learning the heir to his father’s estate is an autistic brother he didn’t know he had, Cruise kidnaps him in hopes of claiming the inheritance. The trip west becomes a road trip when the autistic brother refuses to fly any airline other than Qantas, an Australian outfit which, as of the late 1980s, is the only airline that has never crashed. Interstates, too, are out of the question—too many annual fatalities. Even the matter of Hoffman’s underwear requires special accommodations. On the highway, Hoffman reveals he is going commando, eschewing the briefs Cruise gave him because they did not come from the K-mart a few miles from his institution.

You explain all this to a girl in college when you find your favorite movie on cable, already in progress. It’s weird that she’s never seen Rain Man, but this is the first girl you’ve liked since a relationship spanning your sophomore and junior years ended badly.

It was finally over, you realized, when you sarcastically apologized for not being able to drive her around like some chivalrous boyfriend out of the 1950s, and her response, that maybe she wanted somebody who could drive her around, was too composed to be solely an attempt to hurt you.

Cruise and Hoffman have just arrived in Vegas, descending the escalator in matching suits, when the new girl kisses you. Clearly she is interested. Moments later, you pull away, haunted by the words of your ex.

She opens her eyes.

“I mean, I can’t drive you around. I just think you should know.”

“I’ll drive you around,” she says and pulls you toward her.

She breaks up with you amicably after a month and a half, the girl who doesn’t care that you can’t drive. It seems to have nothing to do with your vision, but anything can be ignored for a month, even a year.

Six years, in fact, will pass between your first and last kisses with the poet you’ll marry. When you meet in graduate school, she has a boyfriend, a British fellow who teaches English in Japan. You picture Hugh Grant, whose bumbling charms you’ve never cared for.

“I don’t want to hurt you,” the poet says. She doesn’t plan to break up with the boyfriend, she reiterates while kissing you.

“You are so attractive,” the poet tells you, a single inch between your noses.

The four years prior to this moment in which you have not kissed a girl make it difficult to believe her. Ditto having had only one girlfriend prior to college, a chaste, month-long affair of holding hands on sixth-grade field trips and sitting silently beside each other at lunch. Another girl in college, one who did not kiss you, said you looked kind of like Ben Affleck, but at the time the only Ben Affleck movie you had seen was Chasing Amy, and you weren’t sure what to make of the comparison.

The poet leaves the British boyfriend to be with you. She moves in with you and marries you and is still attracted to you, she tells you in an email one morning, still loves you, but will no longer be complicit in your lie, whatever that means. She means your lifelong efforts to conceal your blindness, but whatever.

“When I was a kid and I got scared, the Rain Man would come and sing to me.” Tom Cruise says this to his girlfriend early in the movie, almost to himself, thinking the Rain Man was an imaginary friend.

Halfway to California, in a motel bathroom, Cruise realizes he had been trying to say his brother’s name, Raymond, and it came out Rain Man. Hoffman remembers the song he used to sing, and the two duet softly to “I Saw Her Standing There.” Cruise’s prickly exterior finally gives way to empathy. He will take care of his brother, money or no money.

In the end, life outside the institution is too much for Raymond, and he returns to Cincinnati, but never mind that. Tom’s girlfriend, after nearly breaking up with him, has taken him back. He has learned to love. His brother will always live in a world of his own, but after two hours and thirteen minutes, Tom Cruise is a new man.

And so you pop another Tom Cruise movie into the VCR, blind spots larger than the TV, borne back ceaselessly into the cinema of your youth. Nostalgia, you read somewhere, means the pain of a wound that hasn’t healed, but that doesn’t sound right.

After your divorce, living on the first floor of an old house converted to apartments with crooked floors and hissing radiators, you can’t stop watching a viral video of Tom Cruise in a black turtleneck extolling the virtues of Scientology. Between fits of impertinent laughter, he speaks in the acronyms and aphorisms of his new-age religion.

Tom Cruise fandom has gotten complicated in recent years. His couch gymnastics on Oprah when discussing Katie Holmes were one thing—if you were dating Katie Holmes, you’d jump on a couch, too—but his comments on the Today Show were harder to overlook. He called Matt Lauer glib, which, point: Tom, but then he labeled psychiatry a sham and condemned the use of antidepressants.

In the viral video, with his patented smile, Tom says you’re either on the playing field or out of the arena. “Now is the time,” he tells you. “The time is now.”

You authorize eHarmony to debit your bank account thirty dollars a month for the next six months. A friend has you smile for a head shot that will serve as your profile pic. You’re curious if you managed to look directly at the camera but don’t want to ask, don’t want it to matter.

Completing your profile, it’s tempting to type writer for your occupation, but the only payment you’ve ever received for something you’ve written was copies of the literary journal in which your story appeared. More than this, you struggle with how to say you’ve been legally blind since you were sixteen. You type a few sentences about your disability in the “Other Things about Me” section. Hours later, you shorten what you wrote to a single sentence. Finally you delete that sentence and click save.

The Scientology thing has always given you pause. It seems at best a self-help pyramid scheme and at worst a nefarious cult. Either way, it’s hard to argue with the results. He’s Tom Cruise. Who the hell are you?

Aside from a few outbursts, Dustin Hoffman’s performance in Rain Man demands little range. Cruise’s is the portrayal requiring him to change, but Oscar has always had a love affair with disability. Playing normal is much more challenging. This you won’t say during your high school presentation. This you won’t know how to say for a long time.

Many years later, you’ll think of the scene you wish you had shown in high school. Halfway into the movie, right before the famous underwear scene, there’s a moment when Dustin Hoffman breaks character. It’s been a long time since you’ve seen the movie—seen it with your eyes—but you remember it as clearly as your teenage face.

On the highway, Hoffman reiterates that he’s an excellent driver. Cruise says he’ll have to let him drive some time, not meaning it, and Hoffman reaches for the wheel. The car swerves. Cruise screams at his brother, and a narrow grin flickers on Hoffman’s face.

James Tate Hill is the author of Academy Gothic (SEMO Press, 2015), winner of the Nilsen Prize for a First Novel. His stories and essays have appeared in Literary Hub, Prairie Schooner, Story Quarterly, Waxwing, and Sonora Review, among others. He is the fiction editor for Monkeybicycle and a contributing editor for Lit Hub, where he writes a monthly audiobooks column. He lives in North Carolina with his wife. Find him on Twitter at @jamestatehill