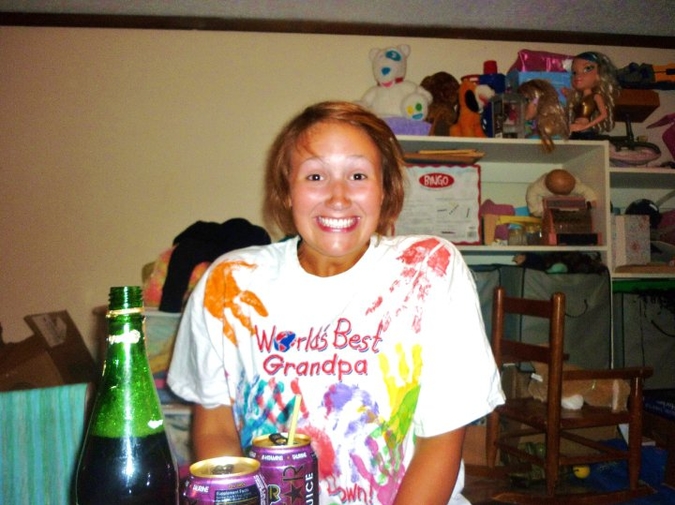 “If you don’t wear a sexy costume for Halloween,” my sister, Jordan, told me, “you’re basically a nobody.”

It was the middle of October and we were walking around one of those pop-up Halloween stores in southern Minnesota. The year before, I’d graduated from a small Lutheran school where I was one of six girls in my class. At Trinity Lutheran, I learned God was always there for me as long as I never exposed my midriff. This year I was a freshman at the public high school. At Faribault High, us Wente girls were known for tits, dark eyes, white teeth but our sharp wit and critical thinking skills were not part of our legacy. Jordan knew we had to use our bodies to start conversations.

“How about this one?” My sister asked, holding up a sexy witch costume, an erect black hat included. Jordan, a seasoned senior, convinced me that literally everyone would be dressed up like this at school. Those first two months, I hadn’t found my place yet at the public school. Too nerdy for the cool kids, too normal for the weirdos. The transition was uncomfortable, so I did whatever Jordan recommended. I followed her instructions even if that path led through quicksand made of birth control pills and UV Blue.

My phone vibrated in my pocket. It was a text from my boyfriend, Joe. It said something like lol not much. Just playing C.O.D. wat chu up 2? We’d been seeing each other for a couple weeks. He was younger than me, but probably the hottest guy at the middle school. Our idea of a perfect date was brushing each other’s thumbs at a movie, and then hugging for a really long time subconsciously rubbing our parts together under our pants. At the end of the date, we would kiss (no tongues) my lips tight, my eyes fully open.

“How about this one?” My sister held up a sexy nurse costume. I crinkled my nose in disapproval. It was too basic for me and even at fourteen I knew I would never be a health professional.

Jordan had already picked out her costume. She had a thing for pirates. Between the ages of thirteen and seventeen, she’d collected Pirates of the Caribbean T-shirts and a blanket that weaved Johnny Depp and Orlando Bloom into the stitching. My mom also found a way to screen print Orlando Bloom’s face onto Jordan’s 15th birthday cake. Her costume was a short velvety brown dress with gold lace around the bust and hem with a matching pirate hat.

She held up a sexy cop outfit made of fake leather. I shook my head.

“You have to pick something.” She folded her arms over her chest annoyed that I was being so picky.

“You’ll look so hot,” she encouraged.

I saw the costume out of the corner of my eye. The package was labeled U.S. MALE Service. Inside: a light blue button-up shirt with a patch above the left breast that said XXXPress, a short navy skirt, and a small messenger bag where one could add envelopes. Never in my life had I thought of being a sexy postal worker.

My sister and I tried on our costumes. My mother, who reluctantly brought us to the store, rolled her eyes when she saw us. She was the type of woman who told us to pull up our shirts to cover our cleavage at church and bought everything for us in a bigger size. Her solid Christian faith would have kept us from costumes like these, but her relationship with my sister was wearing thin. Jordan had a reputation for smoking, drinking, and skipping school either pretending to be sick or forging my mother’s signature on an absence pass. Per my mother’s demand, Jordan still drove me to school when she was fake sick. This was her time to smoke her sneaky pack of Parliament Lights that were kept under the seat.

My mother would’ve allowed us to wear anything as long as Jordan didn’t scream at her that day. She sighed as she brought the costumes to the register. The associate explained the return policy: unworn and within 14 days and then swiped my mother’s card. The transaction was complete.

For those two weeks leading up to Halloween, we took endless photos of ourselves in the costumes. I guess they were officially worn. Jordan pouted her lip acting like Jack Sparrow’s mistress. She changed the position of the sword in each photo sometimes licking it, sometimes posing it between her breasts. When we switched, she coached me to look demure; a sort of soft core sensual. I put envelopes in my messenger bag and pretended to hand them out thinking, How bout you put a letter in my mailbox? My legs were fully exposed. I shielded my eyes with my hat avoiding the camera.

As it got closer and closer to the day, Joe started acting extra needy like he expected us to get married or something. I was too mature to be dating an 8th grader and maybe I knew I couldn’t have a child on my arm before making my debut. So, I dumped him via text. When I looked at the costume hanging in my closet, I thought, I’m a hot older woman now.

Before we walked in, Jordan sprayed herself with Dream Angels “Heavenly.” I walked into a cloud of it as well. I smelled like her: stale cigarettes and syrupy perfume. She walked down the hall confident in her fishnets and boots. I kept my eyes on her because if I didn’t focus on her, I’m not sure I would’ve been able to walk at all. I wanted her to come to class with me or even spend the whole day with me. She led me here but couldn’t take me any further. I had to continue alone.

I kept my head down as I walked into my science class. I took a seat next to my best friend, Molly, who wore her usual sweatshirt and jeans. Without lifting my head, I glanced at the girls next to me who were also wearing jeans—and sweatshirts. In a sea of gray and denim, no one looked like me. The only girl wearing a costume in that class was Kayla Estebrooks, who wore a big blue box around her. She was supposed to be an iPod.

The bell rang. I exchanged books at my locker. In the freshman hallway, I noticed none of the girls my age dressed seductively. I noticed their judgmental looks; the kind of looks that labeled me as a whore. To avoid them, I focused my gaze on the reflection of the fluorescent lights on the tiles of the floor as I embarked on my daunting journey to the other side of the school.

I walked through the senior hallway, heart beating fast. The boys’ stares burned into my skin as they whispered things to each other. Suddenly, I didn’t feel like a cool sexy mature woman, I felt like I was being hunted. My body, which normally had quiet conversations was now yelling, and I wanted her to shut the hell up.

Some sophomore girls were dressed like me. Kenzie was a sexy Alice-in-Wonderland, Jena a sexy fireman, Sophie a sexy nurse. They were the bad girls who smoked weed in the bathrooms; their jeans always tight, their bra straps always showing. They did not want to be associated with me, because I was a sweet Jesus girl, and I was afraid of my desire to be associated with them.

My choir teacher made sure not to look me in the eye that day. We practiced our scales, we did our sight reading, and that entire time he avoided the alto section. Maybe it was the outline of the red naked female body under the XXXPress decal.

After the bell, I waited around for Jordan to appear. She had choir after I did. All I wanted was to feel normal for a second. I wanted to be around someone else who might be feeling as foolish as I was. Five minutes went by and then ten. It was almost time for class to start when I saw one of her friends walking down the hall.

“Where’s Jordan?” I asked, desperate to feel like I belonged.

“She went home sick, I think.”

The bumps on my skin either felt the chilly draft in the empty hallway, or the inevitable sting that comes from the betrayal of a sister.

That afternoon, I finally made it out the doors of that suffocating school. My sister came back to pick me up. When I asked her why she had deserted me, she said she didn’t want to talk about it. She said she couldn’t talk about it. She didn’t tell me what happened to her, but I thought her experience was similar to if not worse than mine because her eyes were puffy, and her face was red.

We held hands. My embarrassment became united with hers. We watched the students walk to their cars. They weren’t paying attention to us for the first time that day. It was a relief. We pulled away from the school unnoticed. We drove as far as we could until we felt completely invisible.

Lindsey Wente is a writer from Minnesota. She is getting an MFA in nonfiction at The University of New Hampshire. She is working on a sexy travel memoir. Find her on Instagram @lindseywente.