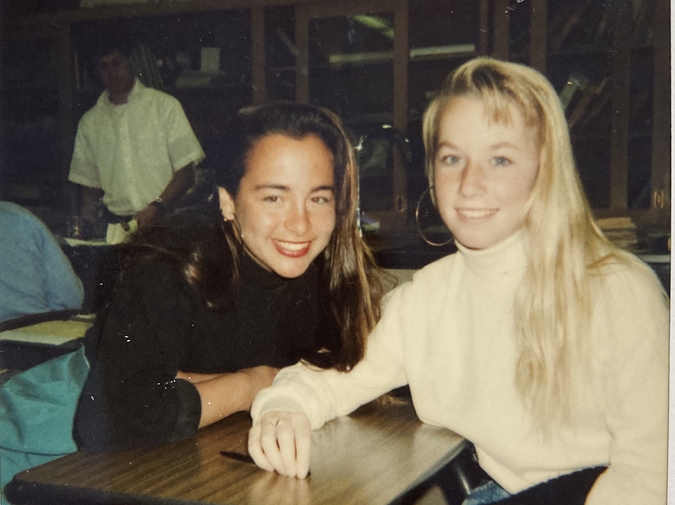 I started high school miserable. By my sophomore year, I was looping Sinead O’Connor on my headphones, the album with “Nothing Compares to You” and “I am Stretched on your Grave,” and trying not to cry every morning in geometry. My outsides (zinc pink lipstick, Bongo shorts, shell earrings, and sometimes, pale as I am, a tan) signaled something different than my insides (feminist, concerned with justice, creative, profane). I’d been riding bikes to the cliffs on the westside of Santa Cruz to watch surfers surf, broiling my body at Cowell’s Beach, grooming myself into a prop, and hanging out with girls who did the same. Of course I soon became obsessed with someone who seemed the opposite of my scene, a straight-edge boy I’ll call TS.

To me, TS was capital H-O-T, with his shaved head and quiet brooding, those thick, black exes on his hands and tall Doc Martins. I would pass him on my way into biology, a class I had with one of my best friends, and I’d rush to tell her who he’d been talking to, whether we made eye contact, and what he was wearing. I’d profess daily how he was the sun I wanted to burn myself up in. Unbeknownst to us, one of his best friends sat close by.

At first, though I couldn’t see it, I regarded TS as more get-away car than full human, but after our light kissing ran its course, a real friendship stuck. Moving into my junior year, I’d discovered Jane’s Addiction, the Red Hot Chili Peppers, and the Pixies. He had a collection of punk and hardcore records and played me Minor Threat, 7 Seconds, and Bad Brains. We lived fairly close, and he’d hang out with me at the neighborhood video store where I worked alone. I’d jog past his house and, on occasion, watch his band practice. I kept trying on identities, i.e., dating more guys who were not like me—even a couple of hick-types who drove raised trucks and listened to George Straight, proof perhaps that things get worse before they get better.

The August night TS and I went to see Social Distortion felt electric, but that was how most of being seventeen felt. We were itching to be contended with, to step into the adult ring and put up our dukes. We could get jobs and drive. We could get birth control without parent permission. We were marshaling the grievances of our short and still vivid lives like people who can soon sign up for war. In 1991, this cusp coincided with another, a swell of underground bands that were moving from clubs to massive auditoriums, with fluorescent hair, vintage dresses, chain wallets, and the sonic, cosmic chainsaw rip of feedback.

With Social Distortion’s first note, a mosh pit came to life. I pushed against it at the edge as TS, perfectly comfortable, went round and round in a sea of bomber jackets and surf t-shirts. About half-way into the show as he joined me on the rim, I felt him slip his arm around my neck. He wasn’t a huge smiler, but he was smiling at me, and then, in the gentlest of motions, he pulled me in with him, held me locked against his body as we otherwise let go.

To my surprise, we floated. We were driftwood in rapids that stank of armpit sweat and beer breath. Adrenaline and sheer joy had me knowing, more than feeling, the elbows and steel-toes that landed. It was an ecstatic vortex of contradiction, of violence and camaraderie, of being anchored to TS while free falling, of chaos made possible only by the order of the border that encircled it. It’s not like I swirled back out a different person, but in that pit I recognized something new—a better alignment between inside and outside, a gestalt not of finding home but of letting myself feel that home. We dipped in and out of the pit until the end of the show, TS checking to be sure I was still having fun. I was. I was smiling like a goon but didn’t care. I’d keep smiling into the next week as their cover of “Ring of Fire” stayed with me: “I fell into a…” and “it burns, burns, burns.”

I was still miserable, of course, because my misery was made of things a mosh pit can’t undo—a childhood with a step-dad who drank a bottle of vodka a day, a dad who’d told me he could kill me anytime he wanted to—but in that pit I didn’t have to pretend things weren’t really wrong. Two months after the show, Nirvana’s Nevermind would be released, and the coming years would bring a flood of concerts and festivals and no shortage of mosh pits. I’d continue to find bands and people and books and art that were more like me. I’d grow into an adult who worked for a rape crisis center, a human services nonprofit, animal rights lawyers. But in that first pit with TS at the Social Distortion show, I didn’t know any of that. I knew it was 1991, the year, as Thurston Moore would say, that punk broke. I knew there was room in that pit for the fucked parts of life—for celebrating them even—as there’d never been at keggers with surf bros, and I knew on some small level how extraordinarily lucky I was to be that age at that time, to break simultaneously with a whole new sound.

Kara Vernor’s fiction and essays have appeared, or are forthcoming, in Ninth Letter, Gulf Coast, The Normal School, Vol. 1 Brooklyn, and elsewhere. Her fiction chapbook, Because I Wanted to Write You a Pop Song, is available from Split Lip Press.