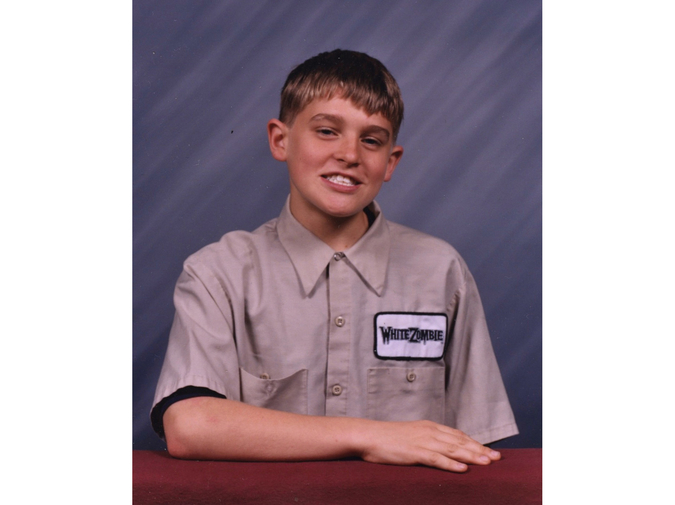 For my eleventh birthday my parents gave me a Sony boombox with a CD player. They’d packed it in a brown cardboard box, obviously not its original package, and stuffed the box with newspaper. I reminded them I didn’t have anything to play on the new boombox and my dad handed me a smaller box. Inside that box were four coins, one side designed to look like a record with the logo for Turtle’s Records and Tapes in center and the other side read “Redeemable in Merchandise ★★★★★ Five Dollars.” The coins were heavy and looked like gold.

At Turtle’s the next day, I scanned the shelves, overwhelmed and unsure. One of the employees asked if I was looking for anything specific. I blushed and looked at the floor.

Then I saw names I recognized from MTV. My friend Sean and I spent weekend nights at his house recording music videos onto VHS tapes. He’d been doing it for a long time and had boxes of tapes, documentation of the music video’s golden era. My favorite was Nine Inch Nails’ “Closer,” filled with occult and S&M images I had never seen before and couldn’t look away from.

Sean said if I liked “Closer” I should see the videos for “Down in It” and “Head Like a Hole.” He dug out a tape from his collection and we watched those two over and over two nights in a row. Trent Reznor’s aggression excited and frightened me. I became hypnotized by the raw vocals and harsh guitars laid over the synthesizers and intricate drums. Visually, they were messy and jarring and, unlike “Closer,” low-fi, making them more accessible, like I could enter that world whenever I was ready.

I wandered to the N section at Turtle’s and flipped through the plastic cases, then picked up Pretty Hate Machine. Those four backward Ns in the band’s name, a small but significant form of destruction, showed me this album was a glitch in the normal systems. The art was an abstracted neon image, vague and very eighties.

My mom examined it. “What does Nine Inch Nails mean?” she asked. I said I didn’t know.

“This is the one I want,” I said, gripping my gift coins so tight they became hot.

I didn’t have headphones for my CD player, so when my parents were home I kept the volume low. At night when they went to bed I played it at a barely audible level and hugged the machine against my ear. When alone, though, I cranked the volume so loud the music came out fuzzy and the speakers popped.

I banged my head to “Terrible Lie,” “Sin,” and “The Only Time” but the slower, darker emotional songs “Something I Can Never Have,” “Sanctified,” and “That’s What I Get,” struck me on a deeper level. Reznor’s scraping voice and stark synthesizer drew a map of my burgeoning pain that grew from the realization that the world was fucked. All I had to do was look around school, observe the lines we were forced into, the organization of our desks, the hierarchy of students based on obedience and performance, to understand that I did not fit in and possibly never would. Because I acted up my teacher kicked me out of class almost daily. I spent “Fun Fridays” in the cafeteria with the other fuck ups. My parents were called in for conferences every few weeks. I made it through the year by mostly shutting down, tuning everything out. School wasn’t a place for me, so I followed the music and embraced it, knowing it couldn’t fix or remove my pain and alienation, but could help me locate it, give it a frequency, a voice.

And Reznor, unlike many other male musicians I had encountered up to that point, expressed vulnerability, helplessness, and fear, in addition to anger, that I recognized in myself but had been taught to repress—not to mention the sacrilege and defiance that would fuel me through adolescence and lead me to battle with many authority figures.

I didn’t have a portable CD player, so I just carried the CD around with me, kept in my desk at school, its perfectly shiny surface a kind of portal that transported me away from the classroom when I looked at it. I memorized every note and key change, wrote the lyrics on scraps of paper (“Lay my hands on Heaven and the sun and the moon and the stars while the Devil wants to fuck me in the back of his car” or “Just then a tiny little dot caught my eye it was just about too small but I watched it way too long”) and tucked them in other kids’ backpacks and jacket pockets.

The CD accompanied me through middle and high school when my music preferences shifted and I morphed into different versions of myself. To process the onslaught of negative emotions and thoughts, I took to smoking weed, running cross-country, and most importantly, writing. Reznor’s lyrics inspired me to jot down some of my own, which grew into a practice that has helped me find a place and, though it might be a bit dramatic, survive.

The disc was eventually destroyed from years of playing and being shuffled through CD cases, but the album is etched inside me, and on my computer, along with the rest of the Nine Inch Nails catalogue.

I still listen to Pretty Hate Machine (“The Only Time” is my go-to karaoke song) and no matter how many times I play it, it never fails to bring my cells to life, to make me feel excited, to remind me it’s possible to give a voice to everything we’re afraid of.