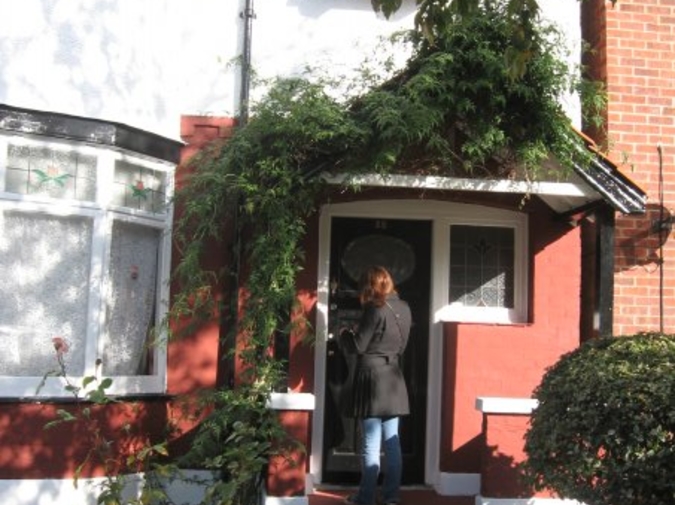 When Gloria and her boyfriend arrived, I was pulling the steaks from the broiler, and preparing a salad. They laughed at my white apron, as I’d hoped they would. Clifford was from another state, and I had only met him once before; he had shaken my hand and looked me straight in the eyes. No other man my age had done such a thing.

After dinner, we all climbed into my bed to watch the pornos. It was comfortable, warm, hilarious. One video involved a Canadian mounted police officer, all in red. In another, people cavorted in Where the Wild Things Are monster costumes, with their genitals out between gaps in the fur. In my bed, the three of us drifted back and forth between scandalized laughter and earnest seduction. I wasn’t so much attracted to Gloria or Clifford individually but was overwhelmed with longing for the two of them together. I’d known Gloria since childhood but suddenly, both of us having not gone immediately to college, we were thrown together as friends. Just as suddenly, she’d become tall and sultry; she and Clifford strolled through our town in sunglasses, sometimes sharing a cigarette.

What do people do in a three-way? Is it this? Is it this? It was a joke we kept finding new ways to tell. At some point, Gloria and I met while she was coming out of my bathroom and I was going in. Can we stop? She whispered. I swayed in the doorway, and she swayed before me, each in our own sluggish eddy. Of course, I said. We slept in a gummy pig-pile.

The next day, I woke first and made French toast. I had a teenaged hangover, buzzing and giddy. From behind me, Clifford appeared and put his hands around my waist while I cooked, biting the side of my neck. Shock and a sort of involuntary delight crackled from my face to my fingertips. This is what it would be like to have someone. Oh, you’re cooking. In the kitchen, he gasped, as if the bare facts of the situation had him near rapture. He smelled of rum farts, and I pulled myself free. Gloria doesn’t want to do this anymore, I told him. I was starting to anticipate having the place to myself again; I loved my home, my tall windows, my keys in their dish by the door.

They left at last, and I spent the day clearing up, deciding how I would tell the story later, smirking with enjoyment when I landed on the perfect words. I fell asleep with the afternoon light bright on my pillow, and woke in the dark, lonely and uneasy. For a long while I lay unmoving, wanting so much to get a glass of water that my mind started a desperately loopy cycle of wondering if I had already gotten up for the water and was dreaming myself still in bed. When I finally rolled over, Clifford was there. He was under the blankets with me, eyes open and watching.

I was more confused than afraid. He’d taken my keys, he explained with a twinkling smile, brushing a clump of my hair from my mouth. So I could come back without Gloria. I sat up and realized he was naked but for a pair of white underpants. He was between me and my door. He was between me and even the edge of my bed.

During the ensuing debate – that he shouldn’t have taken my keys; oh but my eyes had suggested I’d wanted him to! that he should not have come in uninvited while I slept; oh but hadn’t I been so fun and inviting the night before? – I kept myself light, teased and laughed my way gently around him so that at last I was standing. He was puzzled that his surprise hadn’t paid off: why wasn’t I thrilled to find him there under my blankets? At one point he scratched his head. I felt transported back into a stark and colorless version of the night before, one without Gloria.

For the decade that I’ve been telling this story, it’s the audacity that shapes the anecdote, that translates the night into something humorous, in a way that feels almost soothing. That Clifford had an erection peeking out from his Y-fronts while we argued was merely a detail to reinforce the absurd rudeness of the ordeal.

I may have been on a knife’s edge that night; the power to tip one way or another was never mine. In retrospect this is infuriating and horrible. But my relief, when he eventually left, felt like something close to hilarity. His choice to walk away allowed me to imagine the entire thing as simply a hideous comedy of errors. The only choice I was given is whether or not to laugh — at his arrogance, at his tragic disbelief, at his stupid boner — and sometimes laughter is the easiest choice to make.

My memory of getting him out the door is muddled. He made one last gesture - either pretended to snatch the keys again, or held them aloft for me to reach. It’s an unclear memory, but his playful expression remains clear: he was only joking. It showed me an inherent difference between Clifford and myself: for him a joke meant nothing, for me it means survival. When I slept, I kept my keys with me, pressing their shape into my palm.

Emma Brewer writes fiction, humor, and essays. Her work has been featured in McSweeney's Internet Tendency, The New Yorker.com, The Cut, American Bystander, Jellyfish Review, and elsewhere. Find her on Twitter: @emargaretbrewer