My Dog Is My Girlfriend 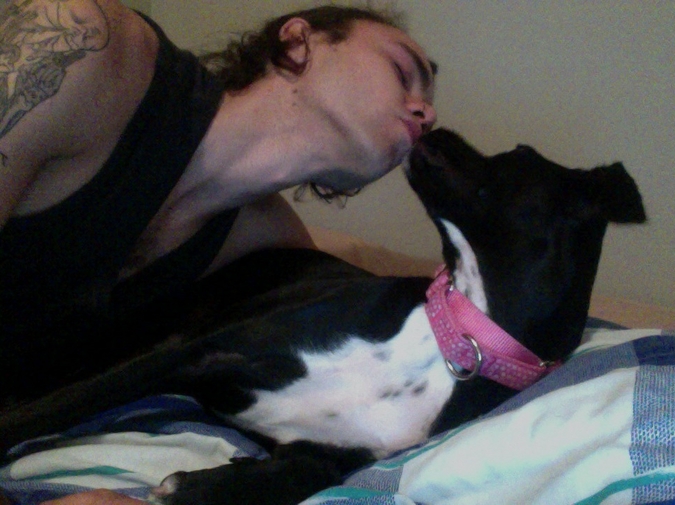 Her food and water bowls lay empty on the floor, like my heart when I'm without her. Her scent remains on my bed sheets; I don't wash them. Her raw hide and my pair of G-Star sneakers she chewed up are on the futon - the haunting presence of an absent, special someone; the nagging nostalgia for the love that remains. Saudade. 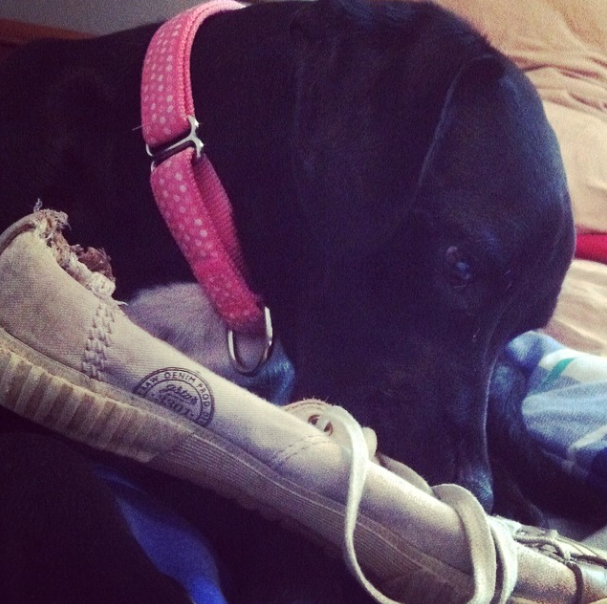 ~10 months ago, my then-roommate Mallory brought home a one-and-a-half month old Boxer-Pitbull, who we named Gracie, and who I immediately fell in love with. We walked her, played with her, bathed her, trained her. We disappointedly cleaned her poop and pee off the floor when she had an accident, celebrated when she "potty outside!"-ed. We argued over the best way to discipline and reward her. We smiled, sighed, laughed, cried together.

And I loved her as best I could.

Until my roommates started dating, and I moved. 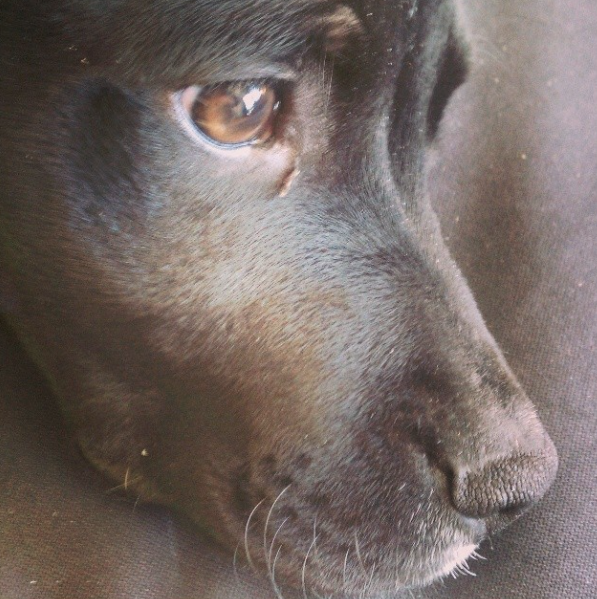 I tried not to think about Gracie too much after I left, and I generally succeeded, until Mal asked if I could watch the dog for a few days while she and her boyfriend moved into their new house.

At first, Gracie was bad - Was she angry with me for leaving? Did she not love me, or even worse, not remember me? It hadn't been that long since we'd last been together, but these were the questions I couldn't help pondering. The more time I spent with her though, the better she became. 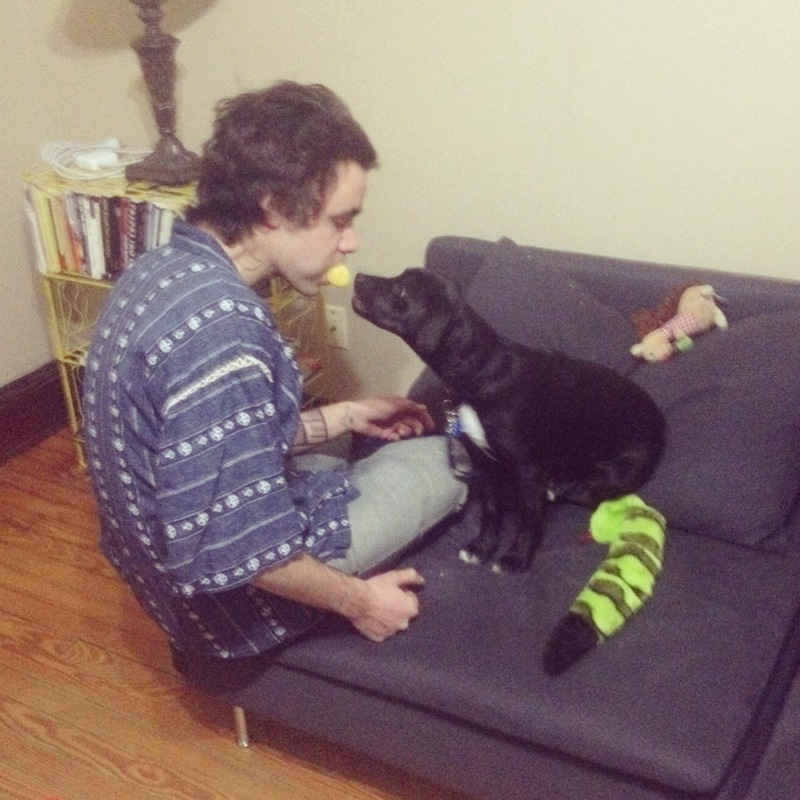 Once she acted so badly that I had to confine her to another room - where she scraped at the door and cried loudly, nonstop - when a girl I was sleeping with came over, because Gracie wouldn't stop attacking her. Usually when people came over, Gracie would jump on them and bark a bit, then calm down and be a "good girl," but when the girl I was sleeping with came over, the hair on Gracie's back stood up, she growled in a way I'd never heard before, she showed her teeth, and she bit, hard and repeatedly.

At the time, we thought that maybe it was the cat hair on her clothes that was causing Gracie to act that way, but looking back, that incident was the first indication that Gracie was more than just a dog - she was my girlfriend... And BOY was she jealous!!! :):) ... 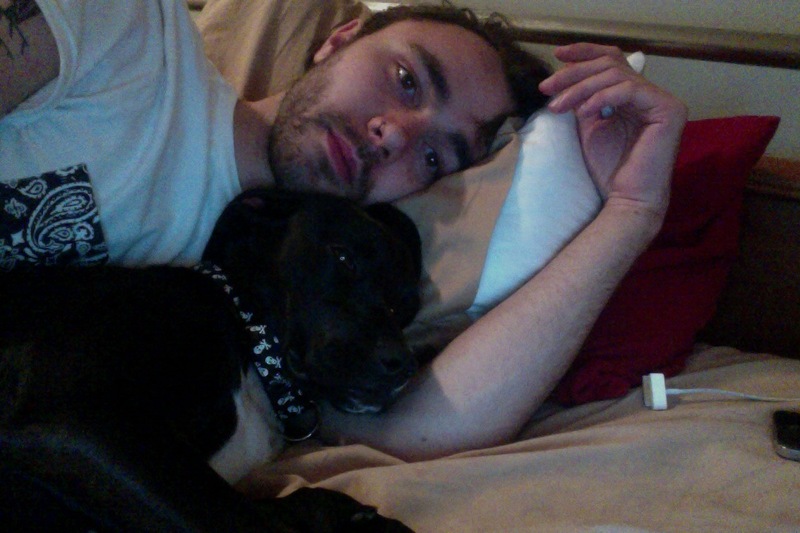 Mal took Gracie back for a period of time then gave her back to me for what I hoped would be forever.

We went to the park together. We took long walks. We watched TV. We ate, slept, cuddled, kissed. She met my parents and my friends, and they loved her (except for a few, who I could tell were only jealous of our love and feared being replaced).

Occasionally while talking about her or showing someone the myriad pictures I had of her on my phone, someone would say something like "She's your girlfriend" or "You love her." I'd laugh and nod...

But little did they know... 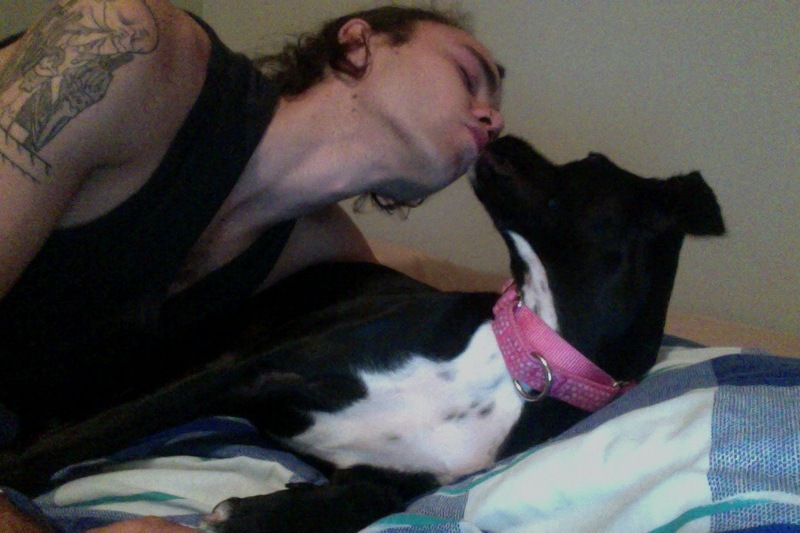 At some point between giving Gracie back to Mal and getting her again, I'd made a conscious decision not to sleep around - something I started doing almost compulsively, with people I didn't really know or care about, who didn't really know or care about me - because It was starting to feel dark and selfish and empty. The goal was to grow into someone who my future girlfriend would want, or someone I could at least stand to be alone with - a useful, caring someone; a whole someone; a kind and loving (not egomaniacal and manipulative) someone - and sure enough, after I started feeling more spiritually fit, Gracie came back into my life, and the gnawing absence of an unknown other was relieved instantaneously.

My feelings of purposelessness and inadequacy vanished. My feelings of self-pity and despair were replaced by love and affection. No more sleeping around. No more yearning for The One. I had found Her. She was here.

I spent the next few months with Gracie, and oh how beautiful they were! As our relationship developed, we went through a whole spectrum of emotions together - me trying to find meaning within, her trying to 'sit' and 'stay' and 'down' - which only served to deepen our spiritual connection. Shortly after I began feeling complete, independently of Her, I started dating a human person, and, unlike Gracie did when other girls came over, she seemed to instantly take a liking to the new woman in my life. Gracie's role changed from girlfriend to daughter, which, while she may have had elements of daughter in her when she was my girlfriend (;)), this shift in dynamic seemed only natural, and made it easier for me, when Mallory took her back a few days ago, to accept the situation as necessary. It was less like a breakup and more like she was going off to college. My girlfriend was replaced by a daughter, who needed to go elsewhere, and who, I can only hope, will cherish the memories we had together, and grow into a beautiful creature of the earth, on her journey to becoming a woman. 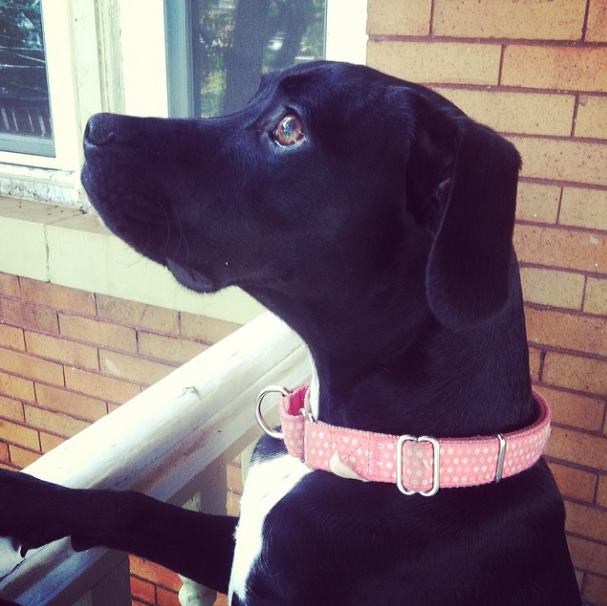