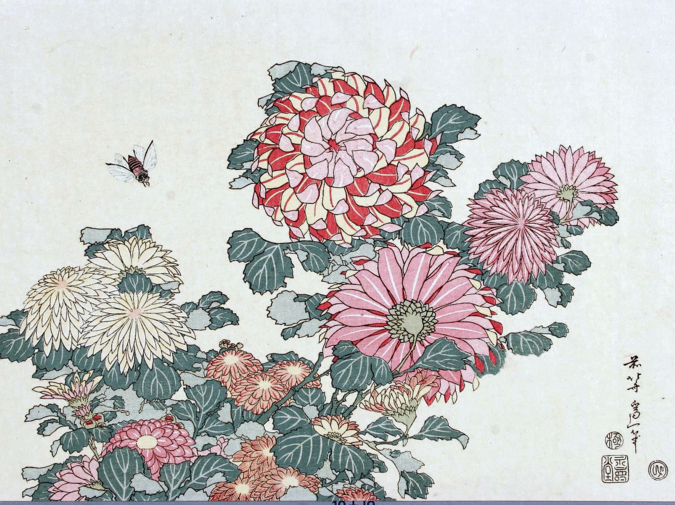 I didn’t sell any mums. The hardy mums have been late this year and nobody wants unopened mums. They think they’re duds or something. They want to see the blooms.

I tried taking them out of their planters and putting them in the ground so the customers would point to the one they wanted and I’d take my shovel and dig them back up and pot them back into their planters.

I thought that would make the mums more enticing. If it looked like the mums had sprung up in neat rows from seeds then the customers would think I grew the mums from scratch. They’d think I put all that care in and the customer would want the mums more. But all they want to see are pink or orange or yellow or red petals. They don’t get pleasure from waiting on the buds to reveal their color.

The house was empty so I had one of my Friday night parties. The raccoons materialize out of the dusk and go right up to the tuna cans I had lined up on the back porch railing.

The party began and I went for my whiskey.

They fought like trash carrying on and going after one another. They stole tuna cans out of each other’s fingers. They lapped up the few flakes of fish and brine. I whistled when they showed their sharp white teeth. I drank faster. I used to laugh watching but I don’t anymore.

I don’t know why I still get the raccoons riled up. I guess I do it just for them. I wondered what the neighbors thought about the sounds my parties made. They probably sounded like real parties. The more the raccoons fought the more I drank. I sat right there on the porch. They weren’t scared of me. You’ve got a genuine friend if you can sit close enough to somebody and not scare them away while they eat.

Once in a while, one will make eye contact with me while it chews. I try to see gratitude in their eyes, but they’re my friends so I shouldn’t really expect that. I try to send my own signal to them through my eyes that says that they’re welcome to my hospitality, but my friends are animals after all and they’re the takers in this animal kingdom.

At some point I wasn’t sitting anymore and was lying down on the warped planks of the porch and I could feel the June bugs. I could feel their fanning over me and crunching under me. I could close one eye and see that one friend was left and licking the last tuna can clean. I dreamed about moths pollinating nocturnal flowers. Nocturnal flowers. They open up for nobody but moths or the moon or monsters.

I thought about Jeannie. She's my nocturnal flower.

All my friends went home. I got up and checked to make sure they took the empty cans into the woods. They probably hang the tuna cans onto the walls of their dens like trophies.

I left the door open so the moths came right in because of the light. Many past moths have died inside the light above my sink. The dust that fell from their struggling wings glittered on the dried dishes.

When Jeannie got home she kissed me awake and said shoo-wee. I’d made it to bed somehow. For reasons unknown to me I wanted to know what time it was. I was very drunk but not too drunk to answer Jeannie's questions

“Are you going to work today?”

“I probably need to water them,” I said.

I tried to remember if I shared a can with a friend. It was possible.

She took my place in bed as I rolled out. I saw her belly and was only then reminded that I’d be a father by March. I must get a thrill from the fog melting, otherwise, why partake? She fell asleep in her polo and pleated khakis again.

“Today I’d better sell some mums,” I said because I knew she was asleep.

My only competition for miles was the U-CUT SUNFLOWERS guy. There were always cars parked over there but people were mostly just taking pictures of all the sunflowers. They weren’t cutting or buying any of the sunflowers.

There were so many little girls in starched dresses willing to pose for their moms’ phones. It was like one of those roadside attractions people drive miles and miles to see.

No, it was one of those roadside attractions.

I waved at the sunflower guy and he nodded. I slowed my car and rolled my window down and looked to see if I could get any insider information.

“How’s the sunflower business?” I said.

“I can’t help but give mine away."

The thing with sunflowers is that they get tall and cocky and big and you can see them coming a mile away and by the time you get close you’re through with sunflowers. You get it. You’re bored. They did their job already as you were driving up on them. Your breath is taken away as you take that curve around the field and you realize how many of them are out there.

Not to mention that a whole field of sunflowers is a hell of a lot more impressive than just a lone sunflower that looks like a freak by itself.

You can’t take a field of sunflowers home with you.

Then you think about how heavy they are and how they won’t really work in a vase without tipping over. And then you kind of get upset because a sunflower is obnoxious and hypnotizing at the same time.

Imagine all of those seeds spilling after the petals wilt.

“Why would they want a bunch of pictures of flowers?” he said. “That’s almost as bad as having silk flowers in your house.”

I’ll sell fireworks next year. Customers don’t ask to test out a shell or fountain they just buy them up. They aren’t incredulous about their performance. They don’t care if they bloom into pretty colors against the black sky. They don’t care as long as there’s a fuse to light. As long as they might explode.

Turns out, we decided later, it was silly to try and sell flowers at all. The user experience of flowers had to be re-tooled. All flowers should be stumbled upon and never offered, we agreed. Charge admission to gardens, maybe. Butterflies and Bees eat for free. We thought about how stupid we felt when we bought flower arrangements, too. I imagined being a hunter-gatherer and dropping a big wad of flowers on the cave floor for my family and they just look at me like I’ve finally lost it. I imagined being a mum salesman and bringing home a bouquet of flowers for my wife and she’s tired and pregnant and hungry.

“Funerals. Weddings. Get-well-soons. Proms. There’s occasion, but what for? What’s the use of cramming a bunch of roses at somebody? Weren’t they just to cover up the reek of death?”

“Damn it. Why do people need flowers?”

“I ought to just till these fucking sunflowers over and do something else. Surely to God there’s something better I can be doing with this land.”

“Good luck today. You never know. Maybe they found out sunflowers cure some disease and a big company will come by and buy you out.”

“Hey, I’ll pray the same for you. No sense in both of us suffering.”

The I.O.O.F. cemetery needed a new groundskeeper so I applied and got the job. The first order of business I took upon myself was to throw out all of the plastic flowers that were all over the graves. I got fired for it but the place looked great when I left. Jeannie doesn’t know this either.

Jeannie drove by the mums and saw that my OPEN sign wasn’t out like it should’ve been.

“Where were you?” she said.

“Did you drive by because you suspected something?”

Jeannie painted me a sign that said CHRIS’S CHRYSANTHEMUMS to keep by the road but it was embarrassing and it was hard to read “chrysanthemums” from a speeding car.

“You have to sell their potential.”

“You mean I have to get people speculating.”

I can’t be the moon and the moths are all dead. So that must mean I’m Jeannie’s monster.

“Hey!” I said to sunflower man.

“You know what? You should sell the sunflower seeds.”

“Sell the potential. Tell them they could have a field of sunflowers just like yours if they planted the seeds. Charge double.”

“Cut me a sunflower.”

He took his knife from a leather sheath on his belt.

He found a big happy sunflower and made a diagonal cut across its neck. He brought it to me and I took it smiling and gave him a five dollar bill.

I put Jeannie’s sign back out along the road. I gave it a fresh coat of paint. I watered the mums and saw one or two were starting to open. A lady stopped and walked along the rows of mums.

“What color are these going to be?”

“What kind of yellow?”

I thought about saying “mustard yellow” but instead I said, “They’ll be a golden yellow. The kind of yellow that you can only see from the sun on a cloudless day if you’re brave enough to look. They’ll be a rich yellow gold. They’ll be more goldy yellow than yellow gold. Like the best shade of gold yellow a leaf can show, but these mums keep their luster well into November. Long after all of the tulip poplars have turned and dropped their leaves. Yeah, these here will be warm and pure and goldy yellow.”

The lady picked up a planter of the yellow mums and looked at the pursed buds.

“Yes, ma’am and they’re hardy. They’ll tough it out through the frosts.”

“Thanks. My wife made it. And I’m Chris. Come back soon.”

After my sunflower wilted I sprinkled the seeds all along my porch railing. My friends showed up and went to town. Turns out they like the seeds even more than the tuna cans.

A few days later that lady came back to my mum stand.

I scratched my head and raised my eyebrows.

She said, “They weren’t even yellow.”

“Well, sometimes they get mixed up. It’s hard to tell with the late bloomers what you’re going to get.”

“Those mums were the prettiest red I’ve ever seen. They popped like fireworks. Ruby red, is what they were. Crimson. Just beautiful.”

Adam Jeffrey Jr. lives with his wife in Franklin, Indiana. His work has appeared in Neutral Spaces, Back Patio Press and Sludge Lit.