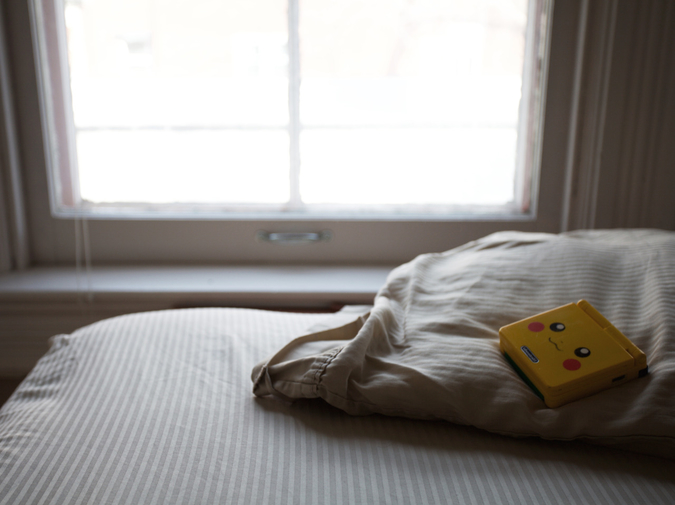 I couldn’t sleep when we shared a bed anyway, so most nights, when he was deep enough, I wriggled out of his armpit to lay on the floor, play Pokémon until sunrise caught on spots in the window. That was the only time I had to myself, so I made it count. I lovingly raised my teams, not like kids who only caught what they needed to win, discarded as necessary. No, my pokémon were my friends. (And it took hours to name them. There is so much pressure after you catch one; you have to name them at once, but you don’t know their personalities yet, nor anything important; only species, sex, and type. You don’t know which will become your closest companions, which will linger in storage until long after you beat the game. And it may be an option, but you can’t change their names later on—that would be rude.) I had a propensity for mammalians; maybe because I couldn’t imagine a ten-foot dragon wanting anything to do with me, or maybe because, tired at school every morning after, I’d daydream my team and I sleeping, finally sleeping, in a big pile in some viridian wilderness. Soft, safe from the night.

For a long time, I felt guilty about having this whole side of myself I couldn’t share with him. That kind of thing bothers you when you inexplicably feel compelled to give somebody everything. Especially when you’re young and have little to give. But when I tried to tell or show him anything, he’d put the game down off the bed, say, Maybe later, and I knew a lie when I heard one, or so I liked to think. I also felt guilty because I couldn’t just lie there content through the night like he wanted, but there was no comfort for me in the nose burrowing into my dirty hair; but I did not relax, only tense, where I was weighed down, sticky under his arms. I also felt guilty because I trusted him when he told me, This is what it is. This is what people go their lives looking for. This is what the movies are about. And all your fucking anime shows, too. (From then on, in the best sappy endings when my favorite characters were finally together, I looked in their carefully-drawn eyes, tried to find any uneasiness at all, and couldn’t. I couldn’t tell who was lying; him, them, or me.

But soon, I couldn’t focus on it. I was distracted. I was cold.  As clear as I could see my Houndour or Cyndaquil with me, I couldn’t feel the fires they set to keep me warm. I guess when you’re twelve, thirteen, tired from another night awake and not properly eating for weeks, in a Toronto winter, no fire is enough—the cold doesn’t leave you. What heat I had was a mockery of heat, but how could I have known. And what heat there was to be found at home, I felt I had outgrown; precociously aware of how I had been found, made, precocious. (I took weird pride in it, didn’t I, too, when classmates talked about first and second ‘base’ like badges, while I was already up against the Champion every chance he got. Or something.)

Yes, my pokémon were my friends. I learned to trust them. Only when they started to come out to fight for me could I finally admit that something had to change. When Absol stood guard to defend me from her own element, even if her fearsome stance had little effect. When I set my Houndoom’s hellfire on him, even if he didn’t feel a thing. When my Abra tried to spirit me out of there in the times I most wanted to fall into shadow. They all lent me the strength to let myself do something about it; knew I couldn’t take him on alone. That day, we played for a while before, built up the will—training, I suppose. Until I went out to his car for the last time and he was surrounded, even if he didn’t see it. Absol and Houndoom bared their fangs, Typhlosion growled white fire out her nose, Nidoking stomped a foot and the earth shook, I held tight the kitchen knife in the kangaroo pocket of my hoodie. And I thought to myself, I’m GOLD. You are, you will always be, SILVER. You may be as hard to overcome as your namesake mountain, but I’m going to win. That’s how these things are written. This is how the story has to go. Our eyes locked,

‘first and second base like badges’  – gym badges are important achievements in Pokémon games; one moves on to fight the ‘Champion’ after winning all of the badges in a region

‘Absol[’s] – Absol is a dark-type pokémon

‘Abra spiriting me out of there’ – Abra is a relatively weak pokémon that cannot really learn attacks, but avoids conflict by teleporting itself and its trainer away from dangerous situations

‘that’s how these things are written’ – GOLD is the player character, so while battles with his rival may be difficult, they are structured in favor of his victory

‘your namesake mountain’ – the final quest in GOLD’s storyline is a long, difficult climb up the coincidentally-named Mt. Silver

Adam Zachary is a rare dark/psychic type endemic to forests around Toronto, Canada.