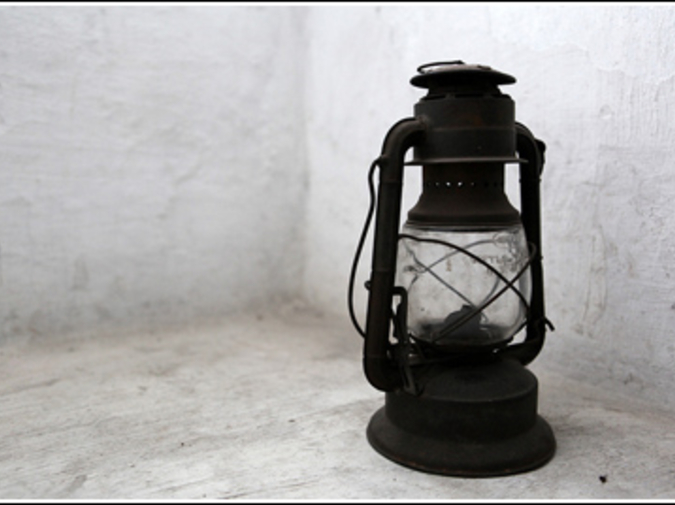 The men with the chainsaws scrambled in the trees. The boy sat across the street, his bike by his side. The earth shook with each dropped limb. A few leaves clung to the branches, the limbs’ insides hollowed by rot. The men on the ground fed the limbs into the chipper. The chipper whirred, the drone of a thousand bees. A brown current spat from the chipper’s chute.

The tremors of the chipper and chainsaws remained with the boy as he rode off. Along the way, he passed his friends; they carried fishing poles and nets and boots. When the boy reached the old man’s house, he performed a rodeo rider’s dismount, the bike lying on its side, the front wheel still spinning. The curtains in the old man’s house were always drawn. The light hurt the old man’s eyes. The boy peered through the front door’s screen. The baseball game played on the radio. “Hello?” the boy called.

The boy stepped inside. Blinding, the darkness after the afternoon’s sunshine. He remained still and waited for his eyes to adjust. The first thing he noticed was the radio dial’s shine in the old man’s oxygen tubes. The old man’s palsied fingers reached forward, and the boy accepted the five-dollar bill. Before he pulled away, the old man seized his hand. The strength of his cold grip surprised the boy. “Thank you,” the old man said.

The kitchen smelled of medicine and rotting fruit. The boy filled a water glass. The heat built as the boy followed the old man up the steps. The old man grasped the handrail, the other hand clutching the oxygen tank. The boy waited as the old man caught his breath short of the final step.

They entered a small bedroom. In the room, a chair and an 8mm projector atop a tall stool. The old man took a framed picture from the wall and rested it on the floor. The wall was blank save the rectangular patch less faded than its surroundings. The old man collapsed into the chair. He shielded his eyes. “The window,” he gasped. The boy handed him the glass. The old man adjusted his oxygen tube and drank; his thick tongue licked the water from his lips.

The chainsaws’ drone faded when the boy closed the window. He pulled the shade and drew the curtain. He turned on the projector’s lamp. A lit square appeared on the wall. The vent above the bulb shone. Dust motes drifted through the vent’s lit shafts.

Beneath the stool, a stack of circular tins, and on each, a strip of cloth tape. The boy shuffled through the tins—Schoolteacher, Waitress, Secretary—before finding Nurse. The boy attached the reel to the projector’s raised arm. With a spin, he unwound the film, a strip of illegible squares. He opened the motor’s casing. Squinting in the unshielded glare, the boy threaded the film over sprockets and rollers. A flick, and the motor caught. The film sputtered forward. The boy secured the tail to the take-up reel, shut the casing, and turned the motor off.

The old man nodded. The boy turned the motor back on. The film loop stammered. The boy adjusted the focus. A black-and-white image appeared, a nurse in a small office, her skin and outfit shaded by the wall’s yellow. “Go,” the old man said.

The boy paused before closing the door. On the wall, a close-up of the nurse’s pretty face, a woman now old, perhaps dead. The old man pulled his chair forward until his shadow became part of the scene.

In the kitchen, the boy filled a water glass and took it to the porch. The late day sun knifed through the trees. In the distance, the chainsaws revved.

Curtis Smith is the auther of the story collections Bad Monkey and The Species Crown (both from Press 53) and the novels Sound and Noise and Truth . . . or Something Like It (both from Casperian Books). His essay collection Witness will be released by Sunnyoutside Press in late 2010.  His works have appeared in over sixty literary journals and have been cited by The Best American Short Stories, The Best American Mystery Stories, andThe Best American Spiritual Writing. He can be found online atwww.curtisjsmith.com.