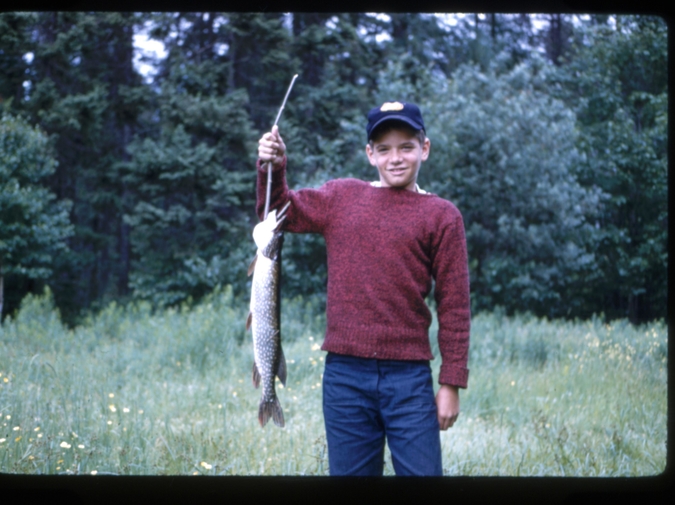 I’ve been tasked with digitizing my father’s slides, a hundred or so he inherited from his aunt. They have been in a box for a decade, ignored since the slide projector broke—I still remember the hiss of the bulb when we tried to watch them in the basement, the way the machine hummed but failed to produce an image, and lacking the money or the motivation to fix it, my father shrugged and had me stack the boxes of slides in the corner. Not that it matters now. He can’t see the slides, blind as he is, but I still make the appointment at the library to use their scanner to convert as many as I can in my three-hour window. It’s slow going. But I’m impressed by the quality of them. Not the composition, but the color. The richness of the trees, the snow, the glistening skin of the recently caught rainbow trout, a stick through their gills, held up by my father at ages six and eight and fifteen. How clear his face is, despite the decades of dust and dander and cigarette smoke that have coated the slides.

My Amazon account, I’ve just discovered, comes with free cloud storage. I upload the photos I’ve done so far, sixty or so, and send links to my siblings and stepmother so they can access them. My sister looks at a few. Says they’re sad and doesn’t look again. As far as I can tell, no one else has clicked the link. The photos remain unseen. My father and his fish are on their own, as if they’d never left that dusty box.

I speak with my father again today. He says he had the strangest feeling last week. He woke up—he has no sense of time so this may have been from a nap in a chair or in the middle of the night—and had the urge to go flounder fishing. It was the weirdest thing. I woke up and wanted to go to Moriches. You were never there, but it’s on Long Island. Tim and I used to fish out there, he says. I have been there, with them both, many times. I never caught anything but I remember the salami and mustard sandwiches, the countless bags of kettle chips, the stink of the bait, the classic rock blaring from a little gray radio, the sweet bubbles and dry finish of a cold beer and the feel of the line paying out from the reel, sliding past my thumb, a hopeful weight dropped into the dark. The hours of waiting for the line to move. Of feeling something tug at the line and reeling up nothing but seaweed, the disappointment and the resolve to rebait, to begin again. How do you figure that, he asks, surprised by the feeling. Waking up and wanting to go flounder fishing?

Moriches means more to me than simply fishing. It’s the first memory I have of my father making me swear to kill him if he ever became a vegetable. I thought the obsession strange then, for he was tenacious about getting me, my brother, my uncle—whoever would listen—to promise to put a pillow over his head if he ever lost his marbles. Seeing his mother-in-law lose it, the diapers, the senseless rage, the incapacity and the stubborn way her body kept going despite her mind long since giving up, convinced him he didn’t want to go out that way. I think I agreed just to shut him up. My uncle did too and, relieved, I thought then that, if it came to it, I could rely on my uncle to see it through. My father said he wanted to be put down and then to have a Viking funeral, his body placed in a flaming boat, a dinghy, a canoe, hell, strapped to a plank, whatever was at hand, set on fire and pushed out into the Long Island Sound.

About two years ago, a few years after his diagnosis with Alzheimer’s but still lucid, he told my sister he wasn’t ready to die. I don’t know how the subject came up. But she said his voice was firm. I don’t know what we would have done if he’d answered otherwise. If certain promises can be broken or must be kept. But here I am wondering about boat rentals in Moriches, about tides and currents, about my father waking up in the night and feeling the need to fish for flounder and casting out for memories of who he was and, increasingly, reeling in an empty hook. But I tell myself there’s some solace, some grace in the casting.

Kent Kosack is a writer and MFA candidate at the University of Pittsburgh where he teaches composition and creative writing. He is working on a novel and a collection of short stories. His work has been published, or is forthcoming, in Sonora Review, Tin House (Flash Fidelity), the Cincinnati Review (miCRo series), Columbia Journal and elsewhere. See more at his website: www.kentkosack.com