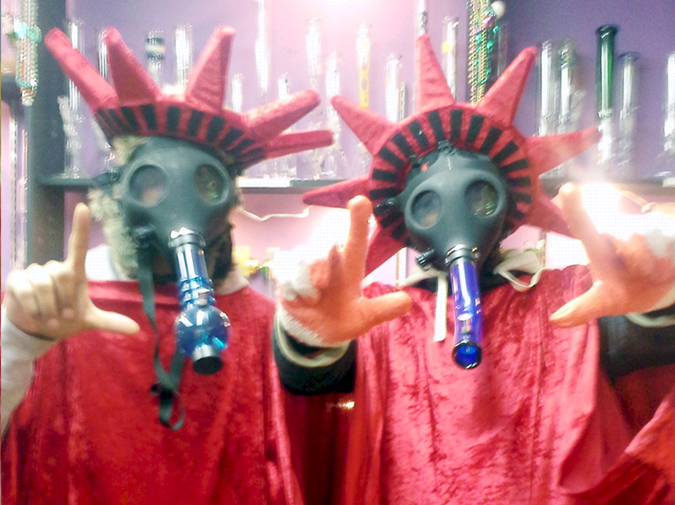 don't want to go watch the new McDonagh flick
Calvary at the Mayan or read the anthology of
surveillance poetics I sent off for the news provides
enough anxiety or eat the x-tra firm grilled teriyaki tofu
w/ soba noodles she & I cooked b/c nothing I like
is good for me & the chemical bath in my brain is still
[half-life undiminished/toxic] so when I walk down
10th ave to the park on a sunny day & the lightning storm
in the back of my skull (they say LSD collects
in the spinal column) don't want to write a poem
even though I told her we would together &
this quiet/[ ]/processing could be better w/
the right music I suppose but I listen to the same albums
on repeat even when I want something different I think
Jack White is talking about himself when he says he drinks
gasoline I [understand/want] [burning/light/blindness] too
I don't want to smoke or not smoke it reminds me
of the sex I should be having b/c ephemeral youth
& hashtag-something-clever but let's be honest
my teeth are rotting I looked in the mirror today I said
this morning there is more gray in my beard than yesterday
though my tolerance for linear time seems to be increasing
don't want to meet my coworkers at William's Tavern for
cheap well shots of whiskey & wonder what my parents think
about the [relevance/or not] of poetry or whether anyone will
read me—ha! how narcissistic—on a cellular level
she & I are not the same people we were when we met
& when I told my father I was moving in w/ her
he said you put the cart in front of the horse again
but I don't want the horse it's a metaphor for
marriage & who's driving the cart? the people
I grew up with are making children & have nothing
but photos & photos & photos I was lying earlier
about my tolerance for linear time b/c I don't want
all the minutes scrolling a newsfeed seeking—this is
a kind of despair the [changing/gaining] speed (please someone
remind me if it takes more than 140 characters will anyone
read it?) & is it not vanity creating a 'private' sphere
for others to consume? don't want the solitude
or the putting-myself-out-there but I wonder if
this writing is 'work' & doesn't seem as meaningless
she says you don't realize what you're asking—I agree
b/c all the universe might be extinct light anyway
but I [understand/want] her silhouette against mine
in the [maybe/maybe not] of stars b/c this might be
enough I don't know

Tyler Atwood comes from a long line of subsistence farmers, but knows very little about the planting or harvesting of crops. He is the author of one collection of poetry, an electric sheep jumps to greener pasture (University of Hell Press, 2014). His poems have appeared in or are forthcoming from The Offbeat, Atlas and Alice, Profane Journal,Palaver, 1001 Journal, Word Riot, Lunch Ticket, and elsewhere. He lives and works in Denver, CO.