May Two People Breathe in a Real Room 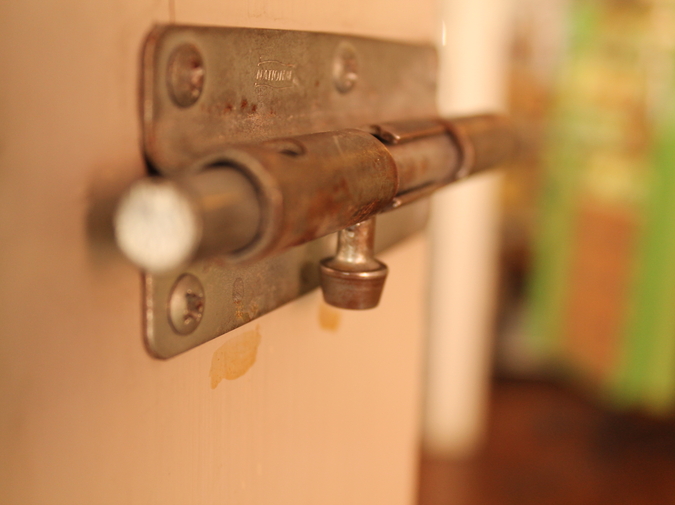 On her bike in the rain, Sally could not shake the bus. The double-decker advanced no more confidently than Sally. She stopped to clear her bangs that conducted a stream down her open mouth. Parking lot lights got into the bus, and the glowering teenagers inside talked with their eyes on Sally. She pulled off on a mountain road, portal-like in its steepness and obscurity in trees. The highway that cleaved the mountains washed the bus from where she could hear it, warped in the rain. In the woods, she stared into the trees and not at the road, the way a lightless room at night compelled her to keep her eyes open and accommodate whatever might fill them.

Not until she was about to hit them did she see the Amish family, the embankment where their pair of ruined horses panted, and in the arms of each girl, naked babies. Sally moved past them apologetically. Lights from the interstate played white and orange on the birch trees gathered like eyelashes behind them. The light moved. Up the road was a car.

The driver called out at Sally. He gave her a fake name. More important than not giving her a real one was giving her something to name later as a fear that was ultimately fake. Sally said there was a diner up the route, on the bright, wide, four-lane interstate. She said so in a voice that raised with it the cries of the Amish babies. She said what she had to to get the ammonia-soaked hand towel over her mouth as fast as possible. She tried to fall into the dry interior.

The driver was on an unfamiliar valley road, still driving when Sally beat the window. With her elbow, dully, she made noise that could not escape from the car. The driver, pointing this out, did not stop her. He told her to stop with an adrenaline spike that could have punctured the glass itself. Outside, when houses and populated lawns fanned around them, he told her about the Sangria parties someone he knew used to throw and how he was planning on throwing one now, soon. He jangled his statements into questions. She looked into the houses, but nobody looked into the car.

He stopped in a cornfield to bind and blindfold her before they arrived at the house she did not see until they were inside. The carpet looked like a mill of worms in suspended animation, glazed with dirt. The kitchen had furniture in it, and food. She put the weight of the typical on her “what now.” When he clocked her across the room, she shouted and shred up carpet in her hands. The carpet was too soiled, but he did nothing while she attacked his pant leg and smeared the greasy fuzz. She ran to the kitchen and tore drawers open until knives sailed out. A good one landed under a chair that he pulled her away from. She jackhammered her palm to his nose. He put her in the chair. He did not take the knife. He microwaved a frozen pizza, and her mouth got wet around growls. She coughed on the hot cheese. She got the knife, and he kicked her in the stomach. Once her vomit was cleaned up, he put her in the basement and made pizza again.

Rough, gray carpet lined the basement walls. The basement was under the part of the house where Sally had not gone, beyond the empty front room and the kitchen. There were blankets and pillows in the basement in a heap that hid nothing. She put them back like she found them. One other time she saw blankets and pillows piled like that at a sleepover, because the girl whose house it was had never had a sleepover and she figured that was how it worked. When he came down the stairs, she told him he was so dumb, he did not know how to have a sleepover. He gagged her, but she talked until then. He looked around the room. She laughed. She got into a comforter and waited for him to come back later with a reel of cord, still in the package, and a cot that was not new.

On the cot he tied her hair back so tightly, she could not close her eyes. He tied her face-up and had to tie her facedown before he could do anything. Sally could feel the impact of that exertion on him. He bit her back, which was only skin gathered in pinch-sized snarls. When he untied her, she rolled onto her side, and the bites dripped and collected between she and the mattress. He left while she talked. When he left his bed and stopped in front of the basement door, she yelled that it was not a dream.

Sally woke him up. Since he installed a television in the basement, he slept more and more soundly until he seemed. When the electric cut out, she resumed talking to herself. She talked herself through every pocket of silence until he would not wait to unlock the basement door. He tried to rip the door off. He tied her to the bed and slept on the floor. Over and over, his hand moved over his pocket.

She said, “Do me a favor and I won't get angry.” He asked her what. She said, “Go get me a friend. Go get me a girl my age.” He left. Not having fought the knots for hours almost a day later, Sally decided this was a way to die that she could live with.

Sally's voice rose to meet the cries she thought were dreams. The man opened the door but could not make it down the steps with his knife wound. Wounds evidenced and collected under his shirt when he was still at the bottom of the stairs. Who cried was still hiding upstairs and even louder.

Sally demonstrated how the basement door locked. She found the bathroom and turned the faucet on. Helen stopped crying and watched the water run. She was covered in mud in a blue shirt with no logos and black pants. Sally pulled Helen's shirt up. Helen undressed the rest of the way. She took off her bra but not her underwear. Sally laughed. “I was afraid you were a baby.”

Sally asked Helen how he found her. He drove through a development of two-story, single-family houses with long rows of pines and the same lawn, unbroken, for miles. Some houses were older than others and the sidewalks broke off and varied in quality depending on the stretch of however many houses were built at any one time. Some of the pines were burnt down. In a small cul-de-sac lorded over by plastic colonials, a cluster of toddlers around an unstable pile of rocks did something ritualistic. Two boys walking the opposite way, who stopped to kick clots of rogue tar, saw him. He left the development, and through his rearview mirror he saw her walk to the edge of her backyard and into the trees. The sun was still behind them.

By the time he had his hands around her wrists, it was dark, and he padded around for her face in a way that made him tremble, like if he was not careful he ran the risk of sticking his hand in a spring-loaded jaw. She sank in the mud when he pushed her shoulders. He pinned her legs in some wet, mangled roots. He pinched her stomach and upper arm and throat. It was wet, her face. He bit her jaw. In the car, he wiped her mascara off. Everything took him forever.

Helen did not want pizza. She could not drive. They exhaled unevenly at the sight of the heather field across the thin road that was there before houses were there, that was not paved or marked. The road stayed that way and took them past sheds and opaque blocks of wood. Sally asked Helen if making Sangria sounded like a good reason for a party. “Is that the sort of thing you're aching to do when you get back? Is that a life beyond cares, would that make you feel like something like this never happened?” They lied on the side of the road.

“Was that better or worse than what he did to you?”

Her answer was obscured by a bike bell. A couple on bikes avoided whatever talked in the ditch. “I said when I decide on that, I'll throw a Sangria party. And then I'll kill myself. It'll be time then.”

Sally watched Helen sleep as she woke up. Lying, her collapse was still detectable. Her hand moved over her pocket. With the tip of the knife, Sally read Helen's ID. The reading anchored Sally to their spot on the road. The wind sounded chopped up by cars. She stopped to look out at edge of the woods, but all the light was natural.

Kari Larsen is a writer/editor dwelling on the banks of the mighty Susquehanna. She is the author of Say you're a fiction (Dancing Girl Press), the Black Telephone (Unthinkable Creatures), and Come as Your Madness (Birds of Lace). More information on these and other projects can be found at www.cold-rubies.com.