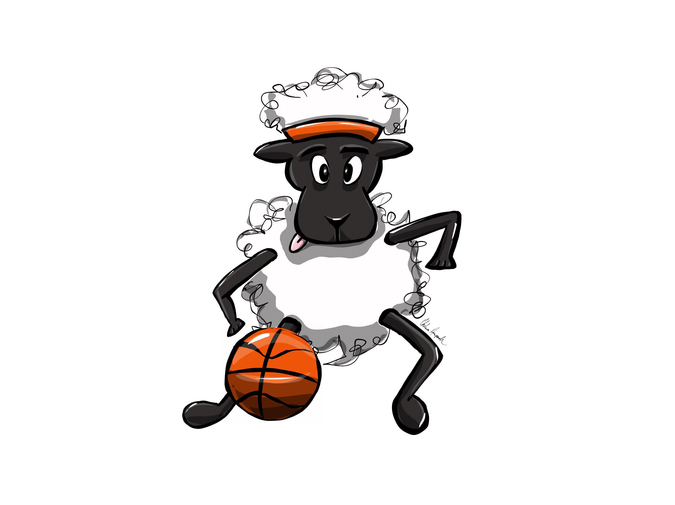 It’s 3:23 a.m. and I’m herding 12 sheep into a lay-up line. First, though, I have to figure out how sheep play basketball. Do they stay on all fours, dribbling with just their front two legs? This would keep the ball closer to the ground and give way to nastier crossovers, one could argue. But as I scan my mental library for examples of personified animal athletes, it becomes obvious sheep ball on their back legs. They’re basically human, but fluffy. So fluffy, in fact, most require old-school sweatbands to keep the wool out of their eyes. It’s badass, but also kind of adorable. Related: These sheep are obviously cartoons.

This wasn’t supposed to be an essay. This month was supposed to be a break. Less writing, less reading, less thinking. A month to slow down, rest, recharge. A few days in, here we are. The lay-up line begins. These sheep are professionals, I decide, so I can give them free rein for their warm-up. That’s good, because I’m tired. Our point guard is first in line; naturally, she shows off her tight handles. Crossover, behind the back, between the legs, cross it back; she finishes with a smooth, right-hoofed kiss off the glass. The next sheep opts for two hard dribbles, a spin into the lane for a lefty finger roll, then a fluffy chest bump and fancy hoof shake.

My ex-boyfriend was the one who seriously suggested I count sheep. His previous suggestion was to read before bed. “Reading gives me too many ideas,” I’d told him, annoyed. “I read all the time.” The lay-up line was my addition, though, and I have to admit, it’s damn-near brilliant. Who wants to count sheep who aren’t doing anything? This is the ultimate sleep cocktail. We are the Golden State Snorers. The LA Sleepers. The New York Naps. The Detroit Sleep-Ins.

“I think overanalyze is the wrong word,” I told my ex once. “I analyze things thoroughly. By saying over-analyze, it implies I should do it less. I think it’s good to think critically.” A few days later, I amended my thesis. “I think I need to break it into two sections: situations where analysis adds value or can spur change, and situations where analysis is a total waste of energy.” “Don’t overanalyze how you overanalyze,” my ex replied. “Whatever,” I replied, annoyed.

Yesterday, I called my mom. I needed someone new to strategize with; my ex had heard enough. “I think the fact that I know how important sleep is to health is actually making it worse,” I said. “Like, I’m obsessing over how my lack of sleep translates to a lack of health, and that’s probably part of the reason I’m not sleeping,” I said. “Like, I probably shouldn’t even be saying this right now,” I said. Like I probably shouldn’t even be writing this right now, I write.

This wasn’t supposed to be an essay. But here we are. So, I decide to make my sheep squad even more brilliant. I decide it’s going to be the best team you’ve ever herd of. The best team around, barn none. We’ll sell out stadiums from courtside to the sheep seats. And yes, yes, oh my god yes, the first all-star on our roster is obvious. It’s the one and only Patrick Ewe-ing. I’m silently giggling at myself. I’m mentally high-fiving myself. It’s past 4 in the morning now and I’m naming sheep instead of counting them. I’m definitely not asleep.

That’s okay, though, because Patrick Ewe-ing needs some teammates. Do we want Wool Chamberlain or Wool Frazier? Or maybe Hakeem Olaju-wool? That’s a good one. That’s original. What about Billy Cunning-lamb? Is that too confusing, since he was also called the Kangaroo Kid? Are kangaroos and sheep cool with each other? What about Karl Ma-lamb? Meh. Bill Shearman? Rajon Ram-do? We need some lady sheep up in here! E-lamb-a Delle Donne, definitely. And we’ll take Shear-yl Miller AND Shear-yl Ford.

I need a deeper bench, though, and I’m blanking. Maybe I should get up and look in The Book of Basketball! Is that cheating? No, absolutely not. This is exactly the kind of situation for which Bill Simmons wrote a Bible-like book about basketball! Heck, I bet he wrote it because he couldn't sleep either! But shit. Getting up and opening a nearly 1000-page book is pretty much the opposite of sleeping—the opposite of the whole point of this whole month.

Goddamn it, Bill Simmons! But also, thank you, Bill Simmons! Without your hard work and sheer dedication, I never would have thought to pick up Shane Ba-a-a-ttier or Carmelo Ram-thony. Our team is now a ram dunk! Why be the Golden State Snorers when we can be the Charlotte Shorn-ets or the Miami Fleece!

But no. No, no no. We know what we really are. We are the Minnesota Tiredwolves. The Los Angeles Wakers. The Utah Spaz. This wasn't supposed to be an essay. But here we are. We are so tired. We are so awake. And all for absolutely no reason.