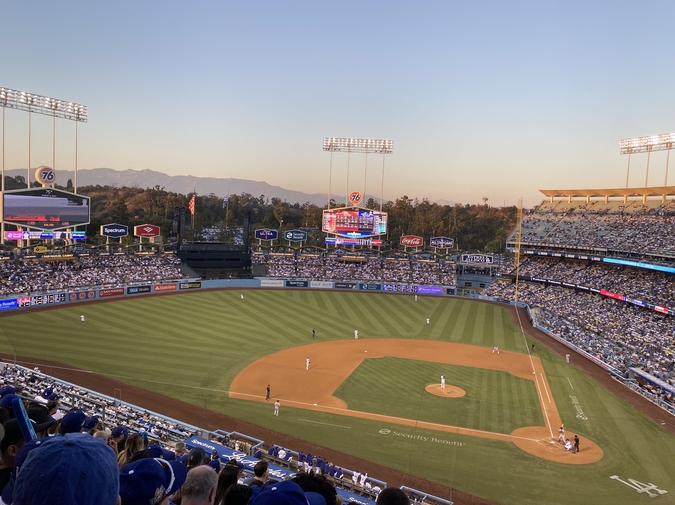 It’s 2018 and my husband and I are on the couch, watching what will end up being the longest World Series game in history— 18 innings, seven hours and twenty minutes. The Los Angeles Dodgers are playing the Boston Red Sox. A week before the game, I found out I was pregnant with my second baby.

That year, Max Muncy became one of our favorite players, and the Dodgers our favorite team. We moved to Los Angeles in 2006. I’m from Queens and was a lifelong Yankees fan. My husband is from Connecticut, and was a lifelong Red Sox fan. We were enemies. But then we moved to Los Angeles, and slowly the Dodgers became our team. A team we could support together. Dodger Stadium is a ten-minute drive away. We almost always sit in the top deck, where you can see the sprawling mountains around Los Angeles, sometimes topped with snow, bright pink sunsets behind the black silhouettes of palm trees, the Hollywood sign in the hills. It is a beautiful stadium.

Muncy was new, but over the course of 2018 he became dependable, slamming home runs in clutch situations, strong, calm, like the Dodgers clubhouse was where he always belonged. When we settled down in our living room to watch the third game in the World Series, I knew—Muncy would be magic tonight.

When I was five or six years old, my favorite character from my favorite book was Max in Where the Wild Things Are by Maurice Sendak. The book is about the wild nature of a child, the limitlessness of the imagination, the monsters we all have within us, and the desire to be loved. I decided then, when I was a child, if I ever had a son, his name would be Max. I didn’t know if this new baby would be a boy or girl, but just in case, I needed to get my husband on board with the name. It would take a grand gesture. He had no feelings about the name Max. I leaned back into the corner of the couch, pushed my legs under a blanket, and knew tonight would be the night I got my husband to agree to naming our maybe-son Max. I just had to pick the right time during the game to tell my husband. I was relying on magic and Muncy.

Max Muncy was drafted by the Oakland Athletics in 2012, and in 2015 and 2016 he got called up to the majors. It didn’t go well. During Spring Training, in 2017, he was Designated for Assignment, removed from the team’s roster. He was placed on waivers, which means he was available for any other team to pick him up. No one wanted him. He cleared waivers and was released by the team. He thought he was done. This was the end of his baseball career, over after it barely even started. He had nowhere to go, nothing to do. Until he got a call from the Los Angeles Dodgers, who signed him to a minor league contract.

In April of 2018, he was called up to the majors, where he flourished. Now Muncy is a centerpiece, a homegrown Dodger, an integral part of the team. Muncy reminds me of my husband—they are big, strong, bearded, good guys. I don’t know how Muncy went from a player no team wanted to a reliable, regular, powerhouse starter. It could be the new coaches, new teammates, new baseball fields, his renewed love of the game, a chance to start over. It’s common in baseball—a player just doesn’t work anymore, the failures pile up, but then he is traded and his story changes. It’s something I love about baseball—that the chemistry of the team is essential. The alchemy is real. What I mean to say is, it’s magic. There’s magic in baseball, it is baked in, it is essential.

But its 2022 now, and Muncy, so great for all these years, is suffering. He can’t hit. He bobbles easy plays. Announcers, articles, and Twitter are concerned: what happened to Muncy? Idiots on Twitter are saying send him to the minors (never gonna happen) DFA him (definitely never gonna happen.) He is struggling.* Cody Bellinger struggled all last year and every rational fan of baseball knew, just like we know with Muncy—this is a blip. This is something he has to work through. And this is because of an injury. Maybe the injury has healed—Muncy had an elbow injury and was taken out of the last regular season game in 2021. He didn’t play in the playoffs. He stayed in the dugout and watched, his arm in a brace. Joe Davis, the Dodgers announcer, with sadness in his voice, said, “That’s not something we want to see.” Injuries aren’t just physical. A stress or fracture in the body is never just in the body, it’s in the mind, in every part of us. It disrupts the magic, and the way we dance with the world.

(*This was true at the time I wrote this. He did indeed get sent down to the minors for a couple games.)

Walker Buehler threw seven scoreless innings in game three of the World Series in 2018. It seemed the game might end quickly. The Dodgers were up 1-0, but then Kenley Jansen, the Dodgers closer, gave up a home run in the 9th. Tied. 1-1. I was waiting. I was waiting for Muncy to get up to bat. I was waiting for a premonition. I was waiting to make a deal with my husband, to invoke magic so that he had no choice but to agree to name the baby Max.

I fell asleep somewhere in the 11th inning, and when I woke up, it was the 13th. “The 13th inning?!” I said, when I looked at the screen. Muncy came up to bat and I felt something zip through my chest. I should say something. I should say it now. I should say, he’s gonna get a hit, and we are going to name this baby Max. But I didn’t. Muncy got a walk and ended up scoring the tying run. The announcers, the crowd, and my husband and I went wild. But then we settled down and I squinted at the TV. Did I miss my moment? No, I decided. This isn’t over. There’s more magic to come.

So many times writing this I lose focus, lose energy. Horrible things keep happening, it doesn’t matter what they are, they will keep coming, it feels relentless, since Trump, since the pandemic, there’s no break, there’s death, war, my baby is born with a broken arm, nerve damage and developmental delays, a pandemic, 18 months of closed schools and closed playgrounds, horrific laws, school shootings, betrayals that rock my community. I can’t keep up. Things happen too fast, one after the other, I can’t process anything, especially not in front of my kids, I cannot fall apart in front of them, they need me present, loving, dependable. I need to cook and clean. I need to bathe them and make them feel safe so they can sleep at night. Why am I writing about baseball? About Max Muncy?

Because as I drive my daughter to her climbing gym, we pass by Stadium Way, the exit for Dodger Stadium, and I say to myself, “I need to go to a game soon.” Because inside the stadium, inside the game, everything makes sense.

Because in a post-game interview in 2022, after a ground ball error to Muncy, who then blew the game, Bill Plunkett asked him, “Does it sort of feel like everything’s against you?” And Muncy tilted his head, his voice cracking and soft, “It certainly feels that way.” He took complete responsibility. He hasn’t been hitting. He hasn’t been fielding well. Something is wrong.

But there’s no choice what to do next. There’s a game tomorrow. You show up, you play, you try again, and again.

Magic happens all the time. In life, in baseball, in art, in science. There’s a delicate balance in order for magic to happen. You can’t want it too strongly. Something about wanting something too much tips the natural order of things. Your will has no more weight than the will of everything else.

The day after Muncy’s emotional post-game interview, he steps up to the plate, striking out yet again.

Joe Davis, the announcer on TV says, “the poor guy.”

But Muncy gets more chances. In baseball, the slate is wiped clean with each plate appearance. He gets a hit in the 5th. “You know that whole dugout is rooting for him,” Dontrelle Willis says, relief in his voice.

I love the bodies of baseball players. They are tall, with hard, strong, athletic bodies. I love that baseball is a mental game just as much as a physical one. I love that you have to remain calm, ready, and I love how much you have to rely on your knowledge, their training, and their aforementioned bodies. I love that there are so many capable, hot men, acting like little boys in the dugout. But I am not attracted to Max Muncy in the way I am to, say, Cody Bellinger, or the no-longer-with-us Corey Seager, who has a body like Michelangelo’s David. Muncy feels more like family. Like my husband, like my son.

The Boston Red Sox also score in the 13th inning. 2-2. It’s a back and forth for 5 more innings, and then we are in the 18th inning, the equivalent of two full baseball games. Muncy comes up to bat and it comes out of my mouth. I am sure of what I say. I know it, in my bones, that he is going to send this baseball out of the park. “Just so you know,” I tell my husband. “If Muncy gets a home run right now, and this baby is a boy, we are naming him Max.”

My husband looks at me. He can tell, by the way I say it, that I know exactly what’s going to happen. He raises his eyebrows. “Well, I can’t argue with that.”

Muncy gets a walk-off home run. The Dodgers win the game. They will go on to lose the series, but I don’t really care. There’s always more baseball. Spring training starts in five months. In eight months, I will give birth to a baby boy. He is three years old now. His name is Max. And right now, Muncy has managed to work his way back to his dependable self. He is doing just fine.

Sara Finnerty has stories and essays in Longreads, Catapult, Brevity and others. She’s a former editor at Entropy magazine and has curated and hosted a number of reading series in Los Angeles, where she lives with her family. Twitter: @sarafinn