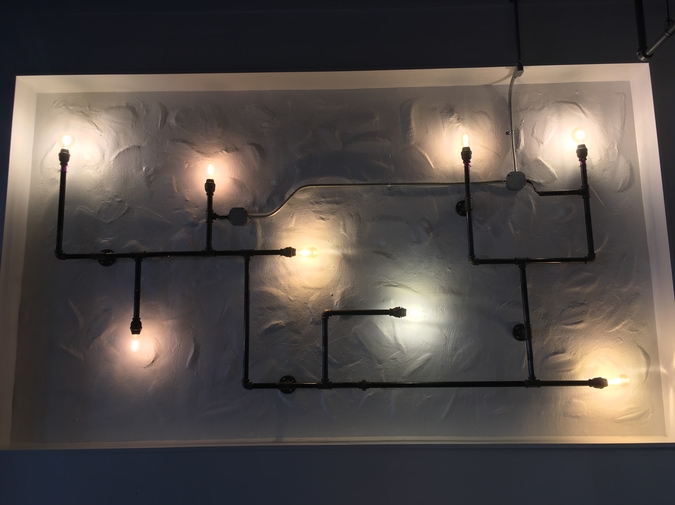 The scene ends with the slotted spoon and my ass bright, our hearts thumping in our ears. We collapse on your bedroom rug. Torsos lube-slickened and high-gloss in a puddle of daylight, we attempt cuddling and talk faith.

“I wanted miracles,” you say.

Christianity was a history lesson, so you studied magic in adolescence: the occult, Wicca, palmistry, Satanism, astrology, numerology. You burned pinches of frankincense to the Goddess and blessed the four directions. You whispered prayers to the crackling coals for hospitalized family and friends. Your magic saved all but one.

“Growing up felt like losing that magic,” I say.

I confess to DIY rituals in high school, tiny fires fueled by crumpled notes and dried flowers from lost loves and later, gifts from my parents during the divorce. In the smoke, my hope conceived visions: sometimes revenge, always return. Nothing I saw was more than smoke. Your paddling sends me closer to the divine.

A freight train clacks by on the track outside your window.

“You’re an atheist tarot reader?” you say. We lean into each other and laugh.

How many times have we lay like this? We count, impressed when it takes two hands. Before the sex, we dared a five-card spread about us. We saw seven golden cups overflowing with illusions, a blindfolded woman between two blades, lovers clinking glasses, a smug sun, two flowering rods. You smiled at the eerie number of pairs. I relaxed into my body and put my arms around you.

We speculate the spread’s meaning while meta-conversing about imagination as a survival tool and magic as early science.

“Do I fit a pattern of harm or healing in your life?” I ask.

You take my hand, open it like a book, and squint. “The heart line signifies romantic relationships,” you say and trace the crease below my index finger.

Mine splinters into a U that arcs back up to the space between my pinky and ring finger.

Yours flows across your palm, a river of love.

My laughter sputters out.

“Palm reading always seemed a bit hokey,” you assure me.

You don’t ask how I fit into your life.

Later, alone, I Google that upward return ... to what? No one in the history of the internet has asked.

I stay up late searching message boards, 15 again, trying to glimpse how the story ends.

“Which heart emoji would you use to respond?”

My ex wags his phone in my face. We’re out at Whisler’s for his birthday, and the screen glow makes my eyeballs ache. I catch nothing of the chat with one of the three matches he’s trying on.

“My favorite is the gold heart,” he slurs, answering himself. “Heart of gold. Like if someone posts a photo of their dog—because dogs have hearts of gold.”

He asks if I’m sure I don’t want a drink. Either he’s forgotten or doesn’t care I’m eighteen months sober.

I look for you in my messages.

I will try and finish work early, you said last night.

Yesss. Needing your belt around my neck again please?

My reply sounded less desperate in the moment. Worry mutates to paranoia. You’re going where good people go—away from me.

My ex ponders each heart emoji color. Red is obvious. Blue for the blues. Black puzzles him, seems morbid.

“I reposted an article with one today,” I say and recap the present theory on the death of the universe. Heat Death was the old theory—a universe spread so thin that matter no longer collides, stars aren’t born, and atoms cool to death. It’s arguably preferable to the predicted effect of dark energy, a force accelerating expansion. Matter itself might rip apart at some point, maybe soon.

“You’re seriously going to make my night about you and your shit?” he says, hands up.

I apologize and feel worse. When he turns his back, I slip out for everyone’s sake.

From my car, I scrounge the internet for words to differentiate pain, delicious from damaging. Adrenaline, dopamine, oxytocin, endorphins—science is amoral, a jerk. What human faculty protects against circles of violence spinning into the void? I need to believe one exists.

I copy a link to send you a Dutch study that claims kinksters are “less neurotic, more extraverted, [and] more conscientious” when you buzz me.

Our hearts are maybe four inches apart. The distance feels tremendous. I think we want to build homes inside each other.

“I’m falling in love with you,” one of us says.

We don’t move. Outside, a midnight freight train passes, not one squeaky wheel.

How long can I live without air?

Sweat fills any cracks between us. An underground lake springs from our body. Our stillness almost convinces us the admission wasn’t also an ask.

I shift, and you drink a tall glass of purified tap and gasp. The A/C clicks on. Technology rescues human life from Heat Death.

I brush your cheek with my fingertips and smile. Red threads lash your skin, impressions from my hair. You look scared.

We have the talk. Our consolations are so familiar that we stop. We’re someone else we loved. We don’t take the parallel selves vibe personally.

“We’re another chance to get it right,” I say.

We touch foreheads. Fools, we leave our eyes open. You see me, and I see you, giant and uneven, blinking and gazing, here and there, monstrously human.

Levis Keltner is the editor-in-chief at Newfound and author of the novel Goodnight. Their fiction, nonfiction, and poetry have appeared in Anomaly, Entropy Magazine, Be About It Zine, and Bull: Men's Fiction. Levis lives in St. Louis and on Instagram @leviskeltner.