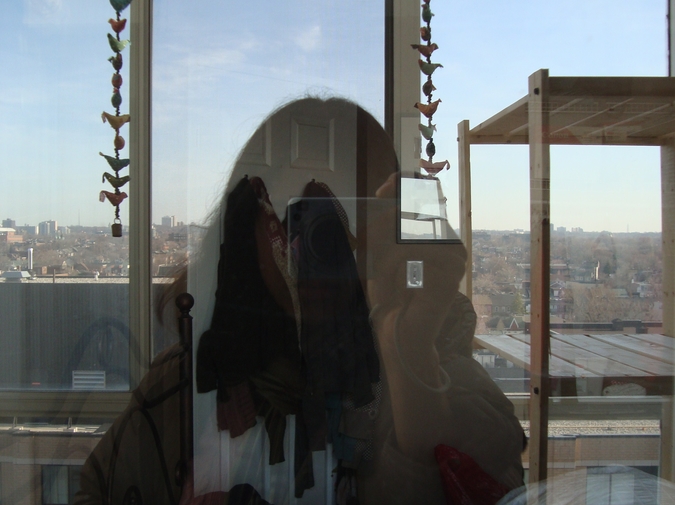 “I don’t know... I just like them because they taste so good.”

He is slightly too tall, slightly too old, grainy like film and the paper cover crackles in the gentle grip of his bony fingers, red at the knuckles.

It was not meant to be this way, there is no explanation for this.

I stare hard at him and look away, towards the family beyond the large window, ambling towards this donut house off the highway, in pink and green ski jackets, messy braids, moustache and gold ring.  The father rests a large hand on his daughter’s low shoulder; she darts out from under it, her brother trailing her flying braids sloppily, the colours moving in on us, on this cold conversation.

The glazed donut peeking out from the bag- I can barely stand it.

He takes a large unashamed bite, chews, swallows, licks his lips, and pushes the soft ring upwards slightly with two thumbs.  He is absorbed with the sensations in his mouth, his procedure for enjoyment. It occurs to me that he is so aware of keeping his hands clean of it, he does it so naturally.

I have had a heavy, hard relationship with those thumbs for weeks now.

>Hey I was just passing by College Park and wondering where you were at, writing-wise, this >week. It is clammy-strange out today.   As I type this I see Duncan on the street across from >me, waving.

“I’m from the Ministry of Social Services, here for the interviews.”

I turn around: “Angela.”

“Oh!  I didn’t recognize you, look at your hair! Wow, so straight.”

“Oh yeah...” I smile.  “I wanted to look good for the volunteers.. you know, make a good impression for the ministry.”  I touch my shiny hair, cross and uncross my shaved, skirted legs, pull down my turtleneck that  tugs impatiently at my curves.   I breathe.  Shit.  “It’s cold out today, eh? Brrrr.”

sent by Blackberry wireless device at 10:24am.

> One of my favorite reading experiences was a book called "The Silent
> Woman" by the journalist Janet Malcolm; it was about the biographical
> treatments of Sylvia Plath and the impossibility of biography in general.
> It's hard to describe the book except it is sort of about the politics of
> biography, writing and the politics of words.  That is the best I can do.
> You would really like the book though.  And it's got lots of goop on Plath
> and Hughes.
> (She (Plath) was fascinated by bodily phenomenon wasn't she.  At one point
> in her diaries she describes in detail what it's like to retrieve a nose
> booger, and then eat it.)

> Thank you for the poem.  It’s not every day that one gets a poem over the email.

I touch his shoulder and hand him a binder, whispering, “It was updated on Wednesday, sorry.”

The man in front of him glances at this, then back to the presentation.  In the break he will ask, “Do you two work closely together?” and I will respond, “Us? No, no!  William, he... he works alongside the Big Guns, the people upstairs.  Me... I don’t know, I’m just an intern,” and laugh a little too loudly.

And I do not know.  I do not know anything.  Except that when he - suited, pinned, and pressed - crawled under the heavy wooden table in Duncan’s office to retrieve that single paper clip... when he came up for light and presentation excited, slightly red in the face, successful in his beautifully unthought-out venture to that world of the underside of things, I stared hard at him, then looked away--  to the words on the paper describing the activities I would undertake to recruit the volunteers.  The bullet points jumped out brighter and clearer than before.  The font was perfect.

Later, when we are miscommunicating, he will suggest that we meet at a coffee shop between him and I.   He will slide across a freshly written email to me, and I will think: Surely one shouldn’t be this enraptured in such a setting? We are drinking tea at the Second Cup on Yonge St., just north of College, there are two women with pastel linen blazers on, broaches pinned to pockets, sitting at the small round table beside us.  Toyotas and Hondas rush past the window, t-shirted teenagers too, and button-down shirts and slacks with white plastic ID tags with their faces, last name, first name, on. We are sitting here, two people, and you have just slid across a thing, once pulp and now the thinnest of bleached rectanges, a ticket to your soul.  You have slid it across for me to read.  And I want to eat it.  I want to chew, swallow and digest it.  I want to say, Will you forever Enrapture me.  Will you forever Feed me?

“I didn’t want to disturb you, you looked so calm,” from the opening to my cubicle.

I look up, hands caressing my warm mug.  I am always looking up at him, he is always smiling down at me.  I liked it this way, I think.   That night I dream of him patting me on the head, with those long fingers, red at the knuckles.  We are in our respective apartments after the interviews.  On the ride home he rolled down the window when the traffic was stalled on the highway.  He breathed in and said, weren’t the lights of the cars beautiful against the night sky?  I stared hard at the side of his face, his eyes to the outside, and looked away.  Yes, I said, look at us.  A bunch of polluting machines clogging up the sky, feeling beautiful.

When his pocket rings, I know who it is.  In a baby voice, he responds that the leftover sticky rice would be perfect for sesame rolls tonight.  He says, let’s have it with the plums.

Veena lost herself then found herself in Toronto. Now she writes poetry, teaches middle school and runs a writing club at her school. She has moved around a lot in her life, but always manages to find (or found) writing groups wherever she is to make her feel complete.