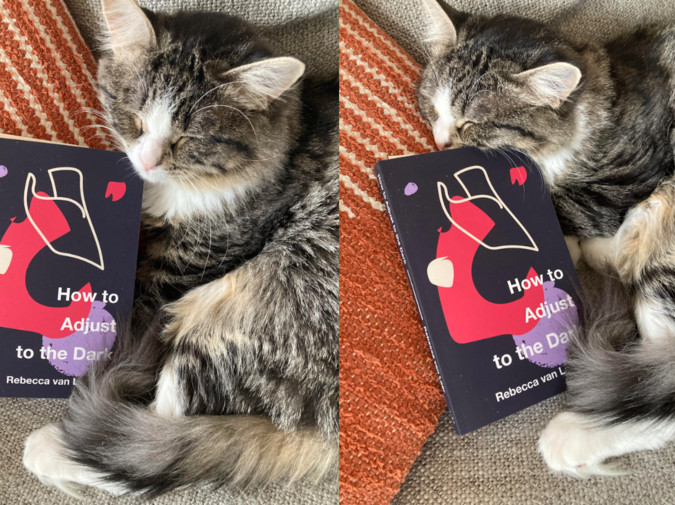 Hobart and HAD contributor Rebecca van Laer's debut novella How to Adjust to the Dark (Long Day Press, April 12) weaves together poetry, fiction, and criticism to follow the narrator Charlotte as she reflects on her early 20s to re-evaluate who she's become as a writer, partner, and person. It's been named a "Best of April" book by Nylon and the Millions.

Rebecca and I had the chance to talk about her novella, discussing the way we can revisit past selves in our writing, chemical stimulants from love to drugs, and how self-growth can change your fiction.

Kate: I'll just say for the record that I loved this so much and I loved it even more the second time I read it. It was interesting to see the little things that I missed and what I hadn’t picked up on. Both times there were many themes that felt resonant to me. And I felt like in a way it could’ve been three books—there were so many different books within it. It's a novella, but there's also a lot of poetry. I wanted to talk about the process of writing the poems and also having a narrative arc. Did you write the poems separately, or was it while you were working on the novel? I’m curious how it all happened because the practice of writing poetry seems so different to me than writing a novel.

Rebecca: It definitely is a different process. I wrote these poems in my teens and twenties. The earliest are from my sophomore year of college, and the most recent were written maybe six years after that. Then I had a few years of “writer’s block.”

I had the idea that I wanted to write a novel, but I wasn’t making any progress. Then I went to Sheila Heti talk where she read parts of Motherhood—not yet then published—where she is flipping coins as a form of divination. This real-life practice would become part of a novel, she told us. At that point, I realized that these personal habits or pieces of writing can become a starting place for a narrative.

I was in graduate school writing a dissertation on poetry, and I decided that I could use my old poems as well as the practice of criticism—which I was more comfortable with—to start stitching together a story. But it took a long time for that to then actually become a narrative, whereas most of my poems came out in a couple of hours.

It’s really interesting and impressive that you were able to do that. One of the things I noticed while I was reading was that it felt like there were two separate tracks; one is in the present and is this immediate warm voice of the narrator. And then this other voice that’s more removed, that’s essentially analyzing Charlotte’s poetry.

Yes—I feel like there are two layers of remove between adult, present-tense Charlotte and the poems. One is the distance created by time. Then there's the level of self-masking or sometimes self-alienation in the poems themselves. Young Charlotte is writing them not quite from her own perspective, but through various personas or masks, whereas the adult Charlotte can be more vulnerable.

Maybe it’s only natural that there’s a more removed voice that comes out when she takes a critical eye towards the poems, and when she does the archeology of uncovering her past self.

You write so beautifully about one big part of her past—unrequited love. It even made me feel nostalgic for it!

You write so beautifully about unrequited love!

Thank you! I think Charlotte is so drawn to that feeling. There’s a line “I was fueled by the excitement of alternating between kissing and contempt.” You did such a good job sort of highlighting that tension and the feeling of desiring somebody even if you don’t actually like them. Yet I think the reader also really understands why Charlotte is drawn to them despite that. But I noticed that none of the boyfriends had names until Charlotte meets Hal at the very end.

I think that there's a little bit of a tension where on the one hand I wanted to make it understandable why each one romantic interest holds allure, but at the same time flattening them to emphasize they’re all part of the same structure for her, where she thinks her wound will be healed by love, but is to drawn to having it torn open again. All of these relationships are a symptom of that mental structure where she finds herself in unrequited love again and again.

And at the same time, Charlotte seems like very comfortable with her sexuality and her body and understanding the nuances of what it means to be a sexual person. It’s refreshing that that was really uncomplicated—even if she used sex for external validation, everybody (maybe?)  does that to a certain extent.

But while there’s a lot of sex in the novel, there are no sex scenes, right?

Yes! That might be another way I’m trying to flatten these particular men to make it more about her than about them. I grew up reading romance novels. I feel like my grandmother gave me the first dirty romance novel not thinking it was dirty when I was  twelve. Then I would go to her house every summer where the shelves were lined with grocery store romance novels that have like three to five sex scenes— but no more. Very tasteful. So those were as important to me as the more literary works I read in college and grad school in some ways.

I wanted to make the book sexy, but I felt like maybe there was already an auto-erotic element to going back over these poems, and it felt like the narrative couldn’t handle or bear the wait of more sex, since I’m already balancing so many threads.

It's nice that the person that Charlotte ends up marrying is the person she has a real friendship with. And that's not the case with any of the other people she dates.

When you're in the thrall of unrequited love, the question of what is sustainable or what makes sense is the last thing on your mind! But I wanted to give her a happy-ish ending and show some growth.

On the way to that, Charlotte also does a bunch of drugs—it feels like sort of typical drug use of someone who's struggling to find herself. And she only does drugs when she’s single, right? She's intoxicated by the men in the same way that she's craving the drug use, some sort of annihilation of self.

Definitely. Charlotte is looking for different ways to escape from her everyday life, but also to make it more intense in certain ways. Drugs, poetry, and love are all a part of that. I had a professor who read an early draft of the book and told me it made it seem like grad school offered nothing but chemical stimulation.

But love is also a form of chemical stimulation!

Ha, Yes! And on the note of struggling to find oneself, It was also interesting to me that Charlotte’s father comes across as the stable primary parent, so it's notable that her struggle is with male intimate relationships (although that might be a heteronormative interpretation). It's surprising to me that the struggle doesn’t come out more in her female friendships—especially because to me, what was so glaring was the absence of the mother.

When Charlotte’s having a hard time and she tries all these different SSRIs and she's like taking a bunch of drugs and she's lying to her therapist and she quits therapy. The whole time I’m thinking the mother, the mother!

You're completely right. The book has a semi-hopeful ending, but there are also things that haven't been examined or explored to the point in the narrative that we get to.

When I started this book, I did not want to think about the mother-daughter relationship at all. I couldn’t, so I didn’t.  It’s at the margins of the manuscript. And then the next novel that I wrote after this is about the dark side of female friendship—we met because you read a story from it in Joyland! And then the project I’ve been working on more recently is more about a mother daughter dynamic.

Let’s talk about the ending. Charlotte writes, “I wanted to destroy everything that made those poems possible. Everything I was taught about what it means to be a writer, an artist, and a woman. None of these beliefs made me happy. They just made poems.” There's such a remove from Charlotte, the person who wrote the poems, and Charlotte, the person at the end of the book, who seems a lot happier and healthier in her life. It made me think—well once you're happy or you get your life together, then what? Does she stop writing poetry because she's content?

That's definitely something that I was unsure about, especially when thinking about how to end the book. What is the difference between poetry and prose? The whole book is an act of writing—writing that pieces those poems together in a narrative.

Most stories have an arc where all of the bad parts accumulate to a lesson—you find out how all the suffering shaped an experience that leads to growth and revelation.  To Charlotte, poems are always the result of intense feeling—and all she can do is live through those separate intensities. But the intensity is smoothed out over the course of the narrative and the process of self-reflection. By the end, she is able to understand how they've made her the person she is in the present tense.

But then what comes after that? The book is one answer, but it also ends with questions.

And I think that you handled that so beautifully. I wrote a note to myself that it feels like such an expansive ending. You didn’t neatly wrap it up; it's more like anything is possible.

I can tell you a little bit more about that ending, which also relates to what comes next. I got the idea for it while I was living in New Orleans. I was seeing this acupuncturist who taught me a few visualizations. This sense of expansiveness came from that period in my life, where I felt quite hopeful, but then my acupuncturist was basically in a cult—or a “spiritual organization” at least that encourages shifting your patterns of thinking. Talking to her, I also developed some pretty unhelpful perspectives alongside that feeling of hope.

When I revised the novel last year, I was on the other end of that period, and I saw more clearly the ways that Charlotte might be a bit self-delusional or naive in thinking that healing is a linear journey. If this character’s life were to go on, she would replay her traumas in her marriage, in her other relationships, and in her other writing, even if it’s not poetry.

The journey of coming to terms with trauma is not linear, and Charlotte doesn’t know that yet. But as I’ve moved through my own trajectory as a writer, there have been layers of self-uncovering, and as I grow more as a person, I'm more able to channel and explore new aspects of myself through my fiction. So maybe that’s right—as long as we keep asking questions, anything is possible.

Kate Axelrod is a writer and social worker in Brooklyn. More of her writing can be found at kateaxelrod.com. You can follow her on twitter @ktaxelrod

Rebecca van Laer is a writer based in the Hudson Valley. Find her at rebeccavanlaer.com and @rebecca_vanl on Twitter.