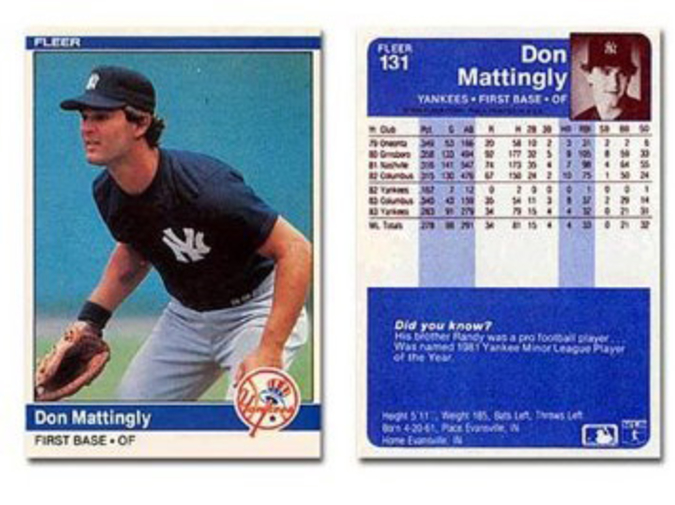 When I first met Dawn, I didn’t know what a lexicographer was. I had to look it up. Later I admitted I hadn’t even realized that people still made dictionaries.

“Of course they do,” Dawn laughed. “Language is always changing.”

“Trader,” I corrected her. It’s true we sell cards, but salesman makes it sound so mercenary. How do you sell a Hank Aaron or a Nolan Ryan?

I met Dawn at the First Pitch Card Show in Newton, Massachusetts. It would have been a memorable day in any event: one kid stabbed another in the leg with a Boy Scout knife in a dispute involving a Dwight Gooden card.

Dawn was the only woman who visited my booth that day who wasn’t a suspicious mother. Baseball card traders have to make a living, but we’re not used-car salesmen.

“I’d like to purchase a Don Mattingly rookie card,” the woman said. She was wearing jeans and a polyester away jersey from the 1980s.

Impressed, I reached for an album. “You a Mattingly fan?”

“I guess so,” the woman said. “It’s for my dad, actually. He loved Mattingly. Said he was the best Yankee since Mantle.”

“My dad was sort of known for his claims.”

“Easily,” the woman said, holding up the card and turning it in the light.

“I’m asking one-fifty, but I’ll let you have it for a hundred. Or fifty,” I found myself saying, “if you’ll let me take you to dinner.”

She handed me a hundred and asked if I could make change.

“What’s your favorite word?” Dawn asked me. We had decided on Redbone’s Barbecue in Cambridge.

“You know,” I said, looking at Dawn, “I think you’re the first person to ask me that.”

I thought for a moment. “Diamond.”

“Of course,” Dawn said, looking pleased. “Know what it means?”

“No, it means ‘hard.’ And you know what else? It comes from a word that originally referred to two different kinds of stones. Diamonds, and lodestone.”

Dawn’s father had taken her to Yankee Stadium, but she hadn’t been to Fenway despite living in Boston for more than a year.

“I don’t know,” Dawn said when I gave her the tickets. “Dad may spin in his grave.”

Dawn had bought that Mattingly card as a belated retirement gift for her father. He had taught high school chemistry for almost four decades. Exactly ten months after his last day in the classroom, he died of a heart attack. Before the funeral, I gave Dawn a ’69 Topps Mantle card—Mantle’s last—to place in the casket alongside his Mattingly and a bat signed by Billy Martin.

Hardly anyone in Dawn’s family knew me at that time, but she asked me to say some words at the memorial. I talked about baseball cards, how the lines of stats all across the back capture the essence of a player but not his substance, how they can record all the batting averages, home runs, and strikeouts in the world but not a single, exquisitely turned double play or a sickening crash over a low wall into the stands to catch a foul ball.

“Your dad would want you to see a game here,” I said. I pointed out the blue seat in the bleachers where a Yankees fan had converted after being knocked unconscious by a home run.

“Yeah, but probably not with you,” she said. I was a Red Sox fan. My childhood hero had been Wade Boggs.

I noticed that Dawn was beginning to tear up.

“Did I do something wrong?” I asked. We’d only been together for a year.

“No. This place is just so goddamn beautiful is all.”

When I asked Dawn where she wanted to go for our honeymoon, she immediately replied, “Spring Training. And not Grapefruit. Cactus.”

So we flew to Phoenix, rented an RV, and followed the Royals around for a week. This was years before they won the World Series. They were a young team, but they had tremendous talent. Dawn told me I wasn’t allowed to work on our honeymoon, but I got some memorabilia signed anyway. And I’m glad I did. For our next anniversary, we’re going to Tokyo to watch the Giants.

After our week with the Royals was up, we drove to the Grand Canyon. Dawn’s father had taken her when she was three. It was her first memory, she said, and it was even bigger than she remembered it.

You don’t know Dawn, but you may have heard of her. She was part of the committee that proposed, in 1997, the addition of the word “McJob” to the Oxford English Dictionary and defended it when McDonald’s went all ballistic. She went on CNN and explained that dictionaries didn’t define languages, merely described them. She told Wolf Blitzer himself that complaining to the OED about a word was about as useful as complaining to Lego about how some kid had used a piece.

That was Dawn’s fifteen minutes. It wasn’t much, but it actually earned her a pair of death threats and the severed head of a steer, which some fool hurled one morning into our front yard.

When a Chick-fil-A vice-president who lives in Boston heard about the steer, he offered Dawn and me free meals for a year if we would appear in a few television commercials. That’s how our friends gave us the nicknames Godfather and Godmother. I’m thinking about changing the name of my store to Godfather’s Card and Coin.

The OED defines McJob as “an unstimulating, low-paid job with few prospects, esp. one created by the expansion of the service sector.”

Like all couples, Dawn and I fight sometimes. We’ve gotten good pretty good at it. We don’t let a fight get to us, not even if someone hurls a dish across the kitchen from time to time. We both know that a fight, a ballgame, sex, dinner, a trip, a flat tire, whatever, is just a single pitch in this game we’re playing together, a jumble of words in a stream still making its bed.

We both have a pretty good idea how it’s all going to average out. And that’s saying something these days.

Richard Johnston (@rrjohnst) teaches in the Department of English and Fine Arts at the United States Air Force Academy. His fiction has appeared in Hobart and Corium. He lives in Colorado Springs.