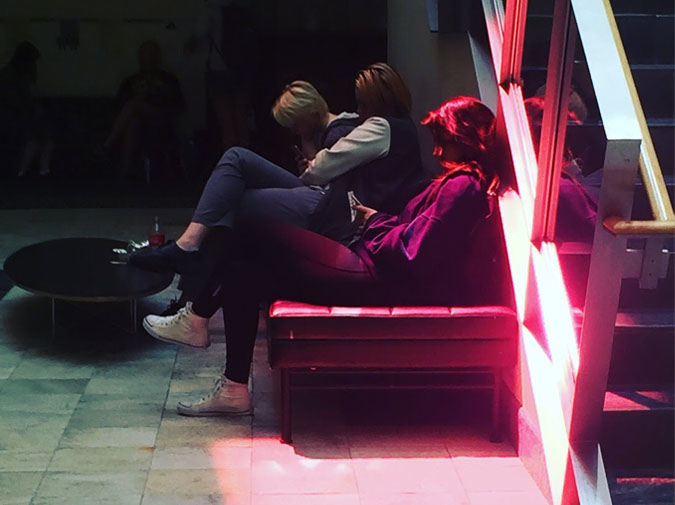 Get her on the couch, turn her over. Show her face to the camera. Put your finger in her mouth. Get her back the other way. Gather her hair and pull it. Let go and grab her ass. Grab her ass cheeks like they’re the bumps in a cartoon heart. Turn her over. Put it between her feet. Get her to stroke it with her feet. Dick guy, get her some water. Dick guy, get her on top. Cup her tits, let them bump into your palms. Hold under her armpits and lift her a little like you’re lifting a cat. Let her bounce. Turn her over. Turn her over. Put it in her mouth. OK get ready to explode. Five, four, three, two, two, two, one. Yeah. Find her bra. It’s under the couch, the red strap. You guys need better lights. Find her panties. Find her pants. Buy her some better pants. What kind of pants does she like? Touch her arm. Get her on the couch. Never mind. Take her out. Does she like shrimp? Hand her chopsticks. Break them apart. Rub off those little splinters. Put a napkin in her lap. Put a napkin in your lap. Eat the shrimp shells. For the calcium. See if that store is open. Is that really seventy percent off? Where’s everyone going? Hell-oooo. Get her in the dressing room. Dick guy, pull down your pants. Mash her face on it. Nothing? Okay, too soon. Go to the check out. Find someone working. Can you steal anything behind the register? Come back around. Do a jumping jack. Scream, “Can you hear me now?” She doesn’t like the pants? Tell her to find another pair. Reach for her hand. Put your finger in her ear. Try your pinkie then. Blow into her hair so it lifts up. Put one finger between her eyes and push. Get down on all fours and put your head between her legs so she’s sitting on your back and you’re the horsey. Squeeze that ticklish part right above her knee. Lift her like a corpse between your arms then toss her up to catch air. Again. Again. Again. Again. Take a break then. Again. Hug. Enough hugging. Do people work here or what? See what’s going on outside. Go to the window. The window. I didn’t say the door. Dick guy, you dropped the pants! Dick guy, what’s going on? Where did she go? Point the camera left. I said left. Where did she go? Dick guy, get her to come back. What are all those people looking at? What am I paying for? I can’t see. Hey dick guy. What are all you people looking at? Dick guy, I’m bored. I’m going to log off. Tell me what you see, dick guy. Stop running. Get her back. What do you see out there? This is a rip off. I’m the life selector. I’m in control. I decide what happens next.

Sasha Graybosch's fiction has appeared in Electric Literature's Recommended Reading, Canteen, elimae, Dogzplot, and elsewhere. She holds an MFA from NYU and works as writing consultant in New York City. She's currently revising her first novel and working on a hybrid non-fiction book that examines the boundaries of self as it relates to our stuff.