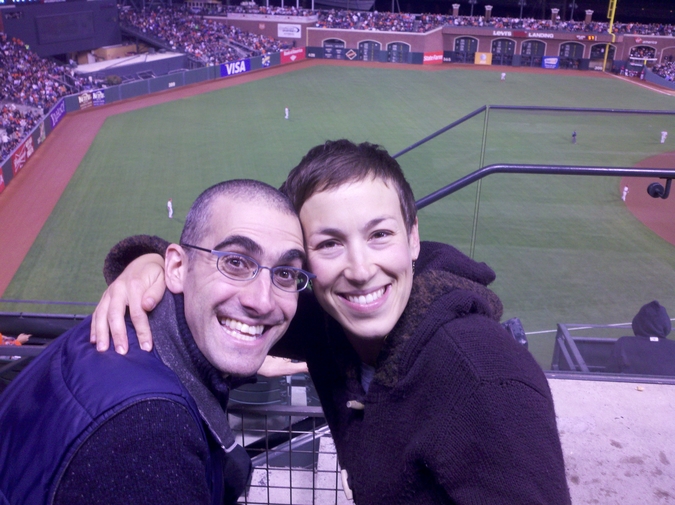 My husband Paul and I are drinking beers and eating hot dogs at the baseball stadium in San Francisco. It’s even a little boring, and I have my back to the field for a while so can I face my friends and talk. A crack gets my attention. I turn around and the Phillies start scoring, and maybe I get a little rowdy with my cheering. Across the aisle is a guy in his late thirties with two little boys, maybe five years old. One has beautiful long orange hair and a red zip-up hoodie. They’re eating peanuts and their feet are submerged in a sea of shells. Their dad is sucking and spitting sunflower seeds. He is decked out in Giants gear, wearing hip glasses with clear plastic frames, and has one white ear bud in his left ear, like he’s listening to reports of other games at the same time.

As the Phillies score multiple runs, the crowd starts getting a little hostile. From our high-up seats we can see pockets of drama erupting among the fans in sections below. Security guards drag people away. Two guys in Phillies hats and shirts above us loudly chant Phillies cheers, to which the crowd responds emphatically with their own cheer—“Phillies suck!”

But we’re doing fine in our section, not causing problems. Everything’s chill till the Giants pitcher beans Phillies player Victorino in the leg. This is unlikely accidental, since Victorino’s the best hitter we got playing tonight. Victorino gets pissed and makes like he’s gonna charge the mound, but gets stopped by another guy. A whole hubbub breaks out on the field, all the players from both teams swarm together in a huge, testosterone-filled, chest-bumping mass.

The whole stadium is booing and everybody (including us) is standing, trying to see what’s happening, and I can feel that schoolyard “fight, fight!” energy. Once we all sit back down, waiting for the players to sort themselves out, clear-glasses dude leans over the aisle and says something to me that starts with “Your team…”

If you’ve ever met people from Philadelphia, you know that we are obsessed with Philly. We start sentences with, “Oh, well, back in Philly…” We make sure everyone knows we’re from there. And we talk smack on other cities that sell thick steaks on doughy buns and call them “Philly Cheesesteaks.” In cities and towns thousands of miles from the mother city, us Philadelphians find each other and take comfort in the familiar loudness, the skepticism, and the gritty accent that turns “Minna, why don’t you guys go get some pizza?” into “Minneh, why ‘on’t yiz git pizzehs?”

I’ve lived in San Francisco now for three years, and the longer I stay, the more I imagine a life here. It scares me that I might never go home again. I can feel my edges softening. I haven’t started wearing a fleece yet, but I bitch about the weather when it goes below 60. So with my hometown family and friends very far away, and the fear that my Philly grit is grinding down to a fine powder, I have become a bigger fan than I ever was when I lived there, of Philadelphia sports.

The guy and I get into it and I say, “Your pitcher shouldn’t have beaned our guy.”

And he keeps saying, “Victorino should’ve taken it like a man. That’s baseball.”

Regardless of whether or not he’s right, I’m annoyed hip dude is going that route. So I say, “Well, maybe your pitcher should have taken the fact that the Phillies were kickin’ your team’s ass and thrown a straight pitch, instead of a 90-mile-an-hour ball at Victorino’s thigh!”

At this point, Paul yanks me and is like, “What are you doing!? Why are you talking to that guy? You don’t even know him!”

Paul probably recognizes that if this guy turns violent, it’s Paul that’ll have to get involved as “the man.” This is problematic, as Paul is a rare Jewish guy from Kentucky and he doesn’t play “the man” very well. We’re a good match.

But I don’t want to protect Paul right now; I want to argue with this guy! I feel that excited, aggressive roar inside me, like, “Yeah! Now I’m at a motherfucking baseball game!” But the guy starts belittling me when he asks how many baseball games I’ve been to.

I respond, “How many baseball games have you been to!?”

And he’s like, “No you’re the winner, you’re team’s winning.”

And I give him the Philly neck swivel with my lips puffed out and the big eyes, and say, “Exactly.” Conversation over.

Hip dude approaches me twenty minutes later at a concession stand and apologizes. Then repeats, “He should’ve taken it like a man, though.” I picture those two beautiful boys he’s got, and the kind of gender education he’s giving them with this “be a man” mantra. I can’t help but think how every time he says it, he is stunting these children’s future emotional wellbeing. But I know it would be going just a little too far to bring up his parenting style.

So when he repeats, “He should be a man,” I interject, “Or a strong woman.”

He nods, like, “You’re right, you’re right,” but then says, “But there are no women in Major League Baseball,” which shows me he didn’t get my point at all, but I don’t want to start another argument, so I “give” him that and we part ways amicably.

To prove his diehard fan-ness, hip dude stays till the last pitch is thrown to his defeated team. At the end of the game, as he passes me, he looks my way, and I see him take in Paul for the first time. He sticks out his hand and says, “Again, I apologize. No hard feelings.” He’s looking at me, but I have the distinct feeling, he’s talking to my husband. As if he realizes he needs to repair some man-code he’s breached by messing with another guy’s woman. I feel pissed, but I can feel Paul’s body relaxing, and I see those sweet boys watching us as they wait on their father. Who am I to show these boys that repair can’t begin with an apology and a handshake? So I take off my Philly-hard cloak and give the man my hand.

Minna Dubin (she/her) writes about motherhood and identity. Her work has been published in The New York Times, The Forward, Parents, Longridge Review, MUTHA Magazine, and Intima, and is forthcoming from Shondaland. She’s working on a book about “mom rage” in 10-minute increments when she’s not texting in the bathroom, hiding from her children. Twitter: @minnadubin