Learning Love Can Be a Creative Force 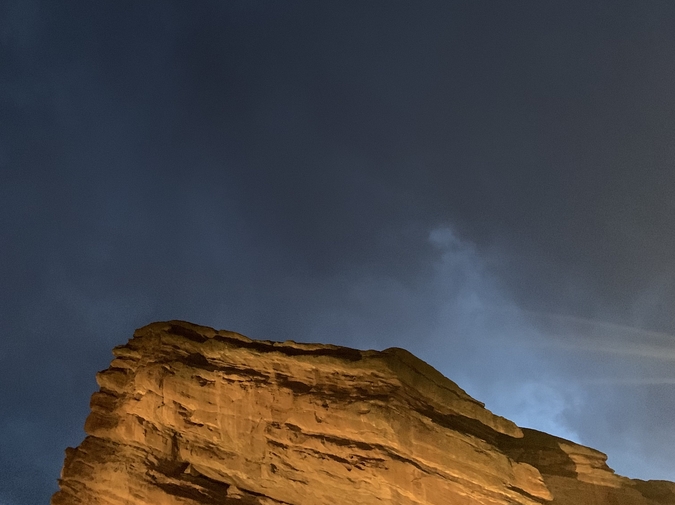 “I like eating watermelon in the bathtub.” That’s what I wrote in the Bumble profile that got me here. I thought it communicated the fact that I wasn’t looking for anything serious. A serious relationship required sacrificing one’s freedoms, I thought. Missing out on things. The last photograph on my profile was a selfie of me in the bathtub, eating watermelon. It was taken a few weeks after I moved to Minneapolis—my fifth city in five years. In the photo, the oversized fruit is cut in half, a spoon stuck in its red core.

In my teens, I fell in love with boys who made me feel safe. In my twenties, I fell in love with San Francisco. When I was 22, I sent thousands of dollars to a stranger on Craigslist to secure a room in the Richmond district, arrived knowing no one. I had never lived in a place where houses were pink, where trolleys prattled down the street, where steep cliffs towered over the beach. There is a profound sense of liberty accompanied by one’s arrival in a new city—you and everyone around you buzzing with possibility. Our house was a block from Golden Gate Park: the most glorious backyard. The world rolled out before me like the Pacific Ocean.

When S and I matched on Bumble, I was 29. I was drawn to his sand-colored beard and gentle eyes. On our first date, we walked to the Minneapolis Institute of Art and sat on a bench outside. It was a cold day in mid-December. We had a lot in common: we’d each put our art first, ahead of most personal relationships, and were extremely attached to our pets as a result. S played bass in a band that toured the country. When he returned from the road, his husky held a grudge for days. My dogs offered the companionship writing often lacked; I didn’t think my work was compatible with anything more. I thought being in a relationship meant committing to one place, physically and emotionally. I needed to be ready to run.

If it weren’t for Joan Didion, I probably wouldn’t have moved to San Francisco. When I was 20, I stumbled across one of her essays on the Internet. I knew nothing of the author but added Slouching Towards Bethlehem to my reading list. At the time, my life had been largely confined to Maryland; I was working at a PR agency about an hour from my hometown. I finally bought Slouching Towards Bethlehem just as I was deciding whether to transfer to the agency’s San Francisco office. It was where most of my clients were—and where the book’s title essay takes place. I took Didion’s time there as a sign.

The day after S and I went on our first date, I drove to California to spend Christmas with my old housemate: the stranger from Craigslist who had become my best friend. We watched the sky turn orange over dramatic cliffs, let the dogs run circles in the sand. S and I talked constantly, exchanging a flurry of photos and voice messages and texts. As a Christmas gift, he sent me all the music he’d ever made. In return, I sent him links to all my published works, Word docs of the rejected ones. We had yet to kiss.

Not long after I moved to San Francisco, I fell in love with writing. I spent my mid-twenties slinking through the aisles of independent bookstores, sitting front-row for their events. I visited every coffee shop I could find, bought new book after new book, read poems into open mics. Growing up, I didn’t know any writers. In San Francisco, they read their words to me and my world opened up even more. I quit my PR job to pursue writing. When a short breakup essay I’d written won a local contest, I read it at a literary event, on a dimly lit stage. There is a peculiar intimacy to telling one’s story to strangers. It charmed me.

S grew up in Chicago, moved to Montana to join the band, moved to Minneapolis for another woman. It didn’t work out, but he stayed. When I met him, he’d just moved into a new apartment, which doubled as his studio. I accompanied him to HomeGoods where he picked out rugs and pillows to make the space his own. His mom’s paintings decorated the walls; his sister’s books graced the shelves. After our shopping trip, I sat cross-legged on his couch, hugging a blue pillow we’d picked out together. S sat at his desk and walked me through symphonies he’d composed for fun. He shimmied his hands to his favorite sounds, grinning like a small child. I was rapt.

I left San Francisco after a few years. I’d started to feel stagnant. I moved to Virginia to work as a journalist, then London for graduate school, then Minneapolis for a PhD. Everywhere I went, a corner coffee shop was waiting. New books and new faces kept me company. A blank page beckoned. “To write new things, you have to do new things,” I always said. Still, I didn’t expect to write this.

After the symphonies, S played me a rough cut of a song he wanted to put on his new album. It was about two of his friends; they’d opened up their relationship only for it to fall apart. He thought the song was good, except for the chorus. A couple days later, I sent him part of a never-published essay I’d written about an ex. “Maybe this could be the chorus,” I offered. Soon, my prose was rumbling out of him, accompanied by a staccato guitar. “And on the walls of our wood-paneled apartment / We’d hung photos of where we’d rather be.” I hugged his new pillow, awestruck. Never before had my words been sung.

For the early stages of our relationship, the pandemic prevented S from going on tour. The first time I saw him play was about six months in—at Red Rocks. He was only gone a few days. I flew to Denver for the show. He took me and my best friend backstage afterwards, just as rain began to drip from the sky. A majestic ridge called Creation Rock jutted out of the ground, towering over the packed amphitheater. Below it, rows of people danced and sang. Above, a bolt of lightning cut the night in two.

Before S, I dated a guy who told me not to write about him. “It’s the only way I know how to exist in the world,” I remember saying. “It’s just a thing you do,” he replied. We were in London, underground. “Mind the gap,” a woman’s voice warned. I dated another guy who wasn’t sure he could ever leave his hometown. He liked knowing he could get a parking spot at Panera. He liked knowing everyone. I remain convinced these men didn’t actually like me as much as they liked the prospect of convincing me to settle down.

S and I were together nearly a year before the band really got back on the road. Their six-week tour started in Minneapolis. A bouncer stamped a horseshoe on the inside of my right wrist the night of the show. S was jittery but prepared, only comfortable in a crowd with an instrument in-hand. I swayed to the music between his friends and mine. The next morning, he was gone. The band would travel the Midwest first, then the California coast. In Minneapolis without him, I tried to stay busy. To distract myself, I hardly stopped moving. I wrote and wrote and wrote.

Before he left for tour, we watched a documentary about Didion together. Her husband was John Gregory Dunne—also a writer. They collaborated on screenplays and revised each other’s work. In the documentary, the interviewer brings up a line that Didion wrote about her husband, asks if Dunne had read it. “He edited it,” she replies.

The first few days of tour, S and I talked only sporadically. He spent each night in a new city, each day in the same van. When he had time and service, he sent me photos of roadside attractions or short videos of the venue. I sent him drafts of the books I was beginning to write. When he finally had a day off, we FaceTimed. S forgot to pack his copy of Didion’s Year of Magical Thinking, a book about the grief and disorientation that followed her husband’s death. He’d been working through it at my suggestion. Somewhere in the Midwest, he bought a new copy. And they say romance is dead.

Over FaceTime, he asked what I’d been working on. I sent him a draft of this essay.

Alyssa Oursler is a writer and painter. Her creative nonfiction chapbook, titled there are many ways to draw a blank, is forthcoming from Really Serious Literature. Find her at alyssaoursler.com or on Instagram: @alyssaoursler.