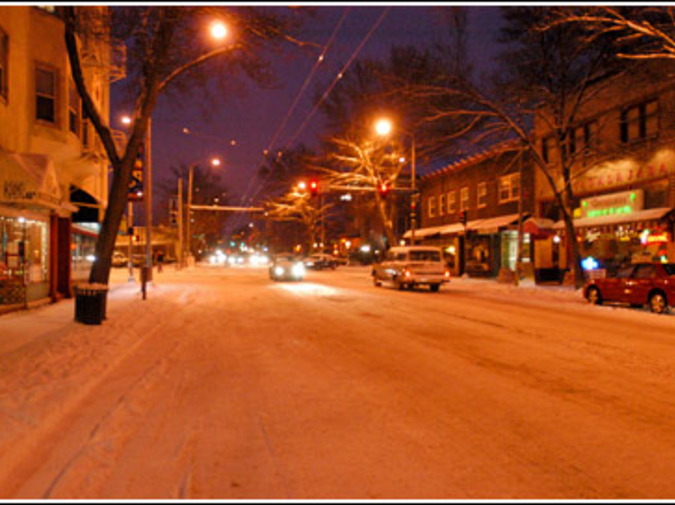 The next morning, you get a call from the Days Inn Akron South and he tells you he’s been in an accident. He is unhurt but crying into your answering machine, saying that he didn’t want to call you like this, but that he couldn’t reach anyone, not even his father. You pick up because it’s an emergency, try to cut in, try to calm him. Then he realizes you’re there, that it’s really you. His words are thick and some are slurred, coming out all at once and then not at all.

Then he cries some more, and you want to let him cry, but you’re too upset for any more of his crying, so you pull the receiver away, its hold like a suction cup, find the nearest chair and sit down.I’m sorry, he says. I didn’t want to call you. Again and again, I’m so sorry. You are too, you tell him, but don’t worry about that right now. How are you? How’s the dog?

Oh, she’s all right, he says and even laughs a little. But she’d have gone right through the windshield if it wasn’t for the air bags.

You’ve returned to the city and decided to stay. You’ve told him you want to see other people, making it sound as simple as stepping out for some fresh air. But now you’ve slipped away into the night—as afraid to open the door as you were to close it behind you—and let in the chill.

He is halfway to New York, halfway through an overnight journey from Normal, a hyphenated town huddled together with Bloomington on the frozen fields of Illinois. And you are alone in a sublet between bridges, looking out along the spans at the galaxy of Manhattan, finding it hard to imagine him out there, beyond all that light, breaking up upon reentry to your world. You have no car, no money to rent one, no way to fly to him, very little patience left, and you can’t call him back because he is at a pay phone without a number.

He explains again the circumstances of the accident, the icy conditions, the fact that no one was at fault, and you try to listen, touch your forehead, find broken-off hairs and work them for reassurance, hear again what he screamed at you, on the phone, a few nights before—I suppose I’m just some fucking story now!—even though he continues on about the air bags, describing how they exploded with gunpowder and gave him a fat lip, how the cup of coffee on the dash was crushed and sprayed everywhere, but didn’t scald him because it was cold. How the dog just hopped into the back seat after the crash, dripping wet, and whined.

But last night, the night you let someone else touch you, take you home—you didn’t see it coming. You didn’t anticipate the heat of those palms, those fingertips on your neck and back, finding their way. You had no idea you’d end up in a strangely familiar place—a bed not your own. You didn’t expect, at 2:15, when you got back to your room, the six messages on your machine, all from him.

In the last message, wrapping up when you walked in, he was crying, saying he was going to take the dog around the block another time, and when he came back he didn’t know what he’d do. You detected a drag and release, saw smoke about his raw face and found it incriminating. He begged you to call, said he wouldn’t go to sleep until you did. What you heard was not his voice. It was the voice of someone else—drunk, in pain, temporarily insane—it could have been anybody’s voice, yours if the table was turned. But it isn’t: it’s him, not you.

You pressed REWIND, threw your coat, reeking of smoke and beer, onto your made bed, pressed PLAY. At 8:32, he told you he was OK, wondered why you hadn’t returned his calls, asked, if you were there, Could you please pick up the phone? In message two, at 9:40, repeating himself, he chose words less carefully: Please, if you’re there . . . please . . . I need to talk to you. I need to talk to you tonight. In messages three and four at 10:28 and 12:10, he didn’t bother saying anything except Where are you? and Why are you doing this to me? Pick up the phone. By the fifth message, at 1:24, things deteriorated: a bark and some squealing from the dog and his shouting at her to Just be patient! Which brought you back to the sixth and last, when he was about to take her out a final time—the one that took you hostage as you locked the door.

Then you dialed the number, stopped, dialed again. You couldn’t decide whether to sit or whether to stand, you couldn’t control your hands, you couldn’t control anything, especially the receiver, which bumped your face and disconnected abruptly, so you tried again, stabbing at buttons in the wrong sequence. You had no idea what you’d say other than I’m sorry, I wasn’t here—the beginning of the truth, the beginning of a lie. You were relieved to get his machine, to tell a little out-with-friends story after the beep, to say you didn’t know what was happening really, before hanging up. Turn off the ringer, you told yourself. Get in bed.

You undressed, turned on the TV, lay down and waited for something, like sleep, to happen. You were lulled by the Weather Channel, the Local Forecast, eyes heavy during the Current Outlook.

When the machine picked up again, it was the dog, yelping for a treat as he tried to speak over her. He didn’t ask where you were or wait for you to pick up but just talked at you through the machine, told you he was about to put the dog in the car and drive straight through. Straight through all that lake-effect snow in Indiana, Ohio, western Pennsylvania, flickering now across the weather map. He told you he was thinking of really doing this, that it didn’t matter where you were or who you were with, he’d find you. It didn’t matter if he made it to New York at all or drove right into a tree, he’d get you back.

Sean Mills has an MFA from Sarah Lawrence College and is a senior production editor at Doubleday Broadway, a division of Random House. He lives in Brooklyn, New York.