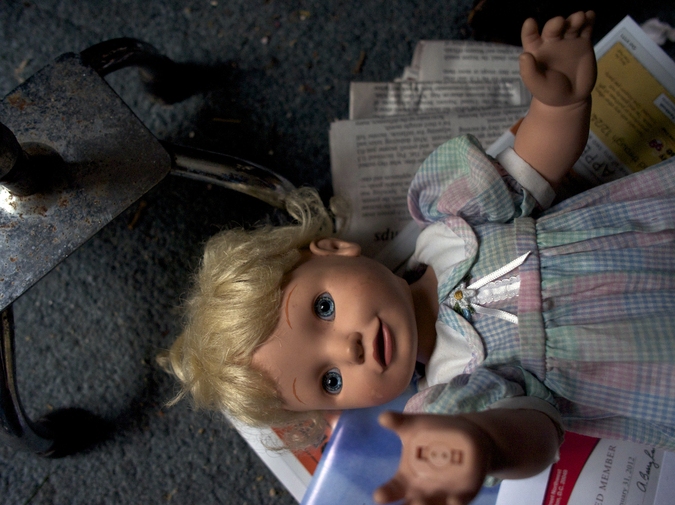 After Pete and his daughter Aya finished the course work to become certified masseuses, they entered the hotel meeting room for the final exam, which began with the instructor asking the entire group to strip to their underwear.

Pete shot a horrified look at Aya only to discover she had, without any hesitation, begun to remove her pants. After discarding them, she cupped the bottom of her shirt in both hands and in one practiced, lubricated motion, pulled it over her head. At least she was wearing modest underwear, a blue cotton ensemble. Still, he had not seen her this exposed since she was a child running through sprinklers.

How was she not self-conscious with him here? He stripped anyway and she had enough dignity not to watch. Thankfully he had worn boxers rather than briefs, but he worried about the flap revealing too much. Under the lurid fluorescents, his choice of undergarment seemed silly—why did his boxers feature dachshunds drinking beer?—but he was even more ashamed of his belly, slumped over his waistband.

By the time he realized what was happening, everyone else had paired up, leaving him with his daughter. Aya looked at him, clearly displeased. He should have begged for a trade, but Aya was already dragging him to the nearest massage table, saying they should get it over with.

“Tests make me really nervous,” she said. “My hands have the shakes. You go first.” She lay face down. Eyeing her white limbs, which looked like high-grade plastic, he felt strange. He had cared for her during her childhood, since her mother had the steady work at the packing plant, and she repaid that care by confiding more in her mother. Yet when he announced his decision to get certified, Aya had decided, with the whimsy of youth, to join him.

The instructor called out body parts and began to circulate with a clipboard and criticism. The skin of his daughter’s legs felt too hot, and she lacked hair except for some downy wisps. When he began to knead the flesh on the inner part of her upper thigh, the sweaty skin made his hands slip.

He stopped himself from asking why. She had dated two boys, at least that he knew about. The first one he called Flowers because he seemed too dainty, and the second, a basketball benchwarmer who loved aerobatic kite flying, he knew by name: Barry. An older name for an older guy: three years older than Aya, already with his AA degree. But they had broken up six months ago, or so Pete thought. He didn’t know where she spent her evenings, since she’d reached the age when she resisted reporting her whereabouts and he’d reached the age when he’d stopped trying to check.

The instructor asked them to move to the feet. Aya had bunions and her mother’s high arches. He had not paid such sustained attention to a body part since her teens, when her breasts arrived, modest and tight, and he noted them only because he knew other men would note them and he felt protective. As he began to massage, making sure to follow her muscles with long, length-wise strokes, she complained it tickled. He worked her heel instead with the flat of his hands. When they were young, they used to play a tickle game where he acted as the Cave Monster that ate little girls. Then came the lean years when the plant cut his wife’s hours and he had to scrape up odd jobs that siphoned all his energy. At home, he could only slump on the couch, gulping beer and offering rain checks to his daughter’s play requests.

The instructor asked those on the table to roll over. Aya rolled. He noticed it immediately. An inked cherub poked from beneath her panty line.

“When did you get that?” he said. He was trying not to overreact but the pitch of his voice betrayed him.

She winced and pulled her underwear higher. “Do not flip out on me now,” she said.

A Charlie horse paralyzed his leg. He stretched it against the table, hissing through his teeth. What terrible timing. With both hands he clutched at his leg while staring reproachfully at his daughter. He never would have guessed how the women in his life would conspire against him, though there had been clues. His wife had hidden a dress purchase from him last month, with a cageyness reminding him more of his daughter than his spouse.

“You’re doing all the right moves but not with grace,” the instructor told Pete. “This isn’t machinery. You have to pretend you’re playing a music instrument. Find your rhythm. Lean into the movement. There. There. There.”

The instructor reached out and squeezed Aya’s calf. “And you? Why are you so tight? Don’t resist the massage. You’re resisting. Let him flow.”

Pete felt skeptical—a musical instrument?—but downshifted his expression into neutral and tried to follow the advice. He closed his eyes and his hands found their path. He followed the beat of their commute’s radio song, the song that Aya had accompanied, her hand snaking through the outside air. To his surprise, it actually seemed to work. His fingers gained purchase deep beneath her skin. Aya’s muscles felt more pliable and every tendon he touched relaxed. She exhaled, as though unburdened, and he pressed himself further into her. Months of training finally engaged. He hoped that if he only kept going, their skins would melt away and all boundaries would be erased.

When the bell dinged for the switch, Aya was slow to roll off the table.

“Wasn’t that great?” he asked, flexing his fingers.

“Because it’s me? Or because you’re nervous?”

“It just feels too close.”

Their whispers had the tenor of shouts. Everyone else had already switched positions and the new masseuses rubbed their hands to warm them. Aya’s stance hovered between two directions: she might flee out the double doors, or she could crack her knuckles and bear down. Pete knew she should stay, she should reciprocate. He took a step toward her, intending to guide her back to the massage table, but she stepped back, wary. When he took another step, she took an equal one backwards, keeping her space. He prepared to try one more time and reached out with his palms up, begging her to come closer.

John Matthew Fox has published fiction in Crazyhorse, Shenandoah, Third Coast, and Arts and Letters. He has graduate degrees in creative writing from New York University and the University of Southern California, and currently lives in Orange County. His projects include a recently finished short story collection about missionaries and a novel set entirely on a cruise ship.