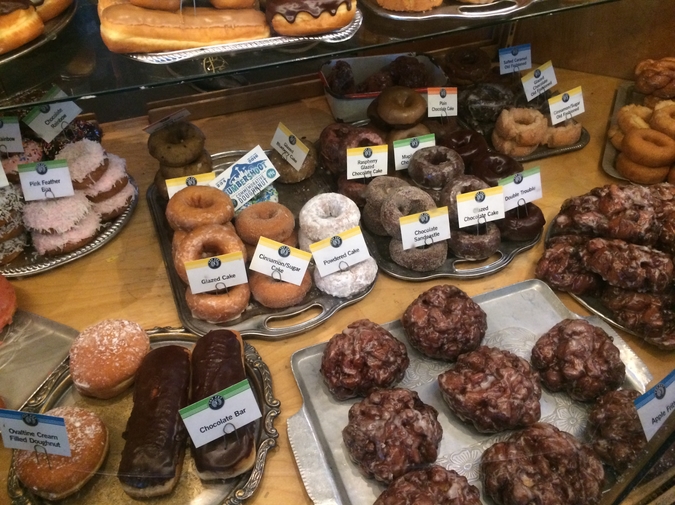 The Hungarian brings flowers to break up with me. I can see him through the window as he takes them from the trunk of his car in the Starbucks parking lot. He holds them out to me as he approaches the table where I’ve set a mug of coffee for me and a tea for him. Orange alstroemeria from the grocery store, the price tag still on the cellophane. This is our last session.

Andor, a doctor completing a research post-doc at the medical school in town, got my number from his supervisor at the hospital. I helped the supervisor’s daughter get an A- on an English paper. I had been out of work for about six months at that point and was cobbling together some adjunct teaching, freelance editing, and was tutoring at a girls’ prep school. I explained to Andor that I didn’t have any ESL training, but he said that was not important to him. He wanted to practice having conversations. He could pay me $20 an hour.

So, I googled “ESL lessons for adults” and met him at the Starbucks close to my apartment. He was blue-eyed and handsome, but his hair was cut badly and parted down the middle. He shook my hand and was overly polite. He seemed younger than me, but I couldn’t tell how much. I don’t remember much of what we talked about that first awkward evening. I have a few notes on a legal pad I jotted down as he told me what he hoped to get out of the lessons. “Confidence” was at the top. Then “Humor,” then “Contractions.” “Vs and Ws.”

We met at the Starbucks every Tuesday evening at 6pm when most people had already stopped for the caffeine to get them through their commute and before the after-dinner crowd. I always settled at the quiet and secluded table at the back. I didn’t want him to feel self-conscious while he practiced, and I was also insecure about my advice.

I made up the lessons week to week. I wrote lists of questions and prompts I would ask him to respond to, each week a different theme. For “hobbies” week, he talked to me about playing the drums. When I asked him to tell me about his favorite place, he described the view from the Votive Church at night in Szeged where he grew up and went to university. I asked him, “What do you do at your job?”, and he would tell me about what he had to do to mice. He was very worried about upsetting me, hesitant to give details, but eventually we both loosened up. We began to talk about movies we liked, to exchange recommendations. He told me to look up Attila József, and I bought a collection in translation. He asked to borrow the Complete Poems of Emily Dickinson he saw fall out of my tote bag.

I started to paint my lips a rosy color using my car’s rearview mirror in the parking lot. To dab a bit of patchouli perfume on my wrists and brush my hair back from my face.

Last week we talked about telephone etiquette. I asked him, “How is talking on the phone with your boss different from talking to your friends?”

He laughed out loud, and I asked him why that was funny. He looked around the coffee shop and leaned forward to whisper.

“You will think it’s strange. In Hungary, we say, ‘Puszi puszi’ when we hang up the phone.”

I laughed then, too, covering my mouth. “Are you saying ‘pussy’?” I asked.

He smiled but also placed his finger to his lips to quiet me. “Yes, it sounds the same. The spelling is different. Someone at work heard me talking to my mother and told me what this means.”

“Your mother?” I giggled.

His voice got even softer, but he still smiled. “It’s a kiss on both cheeks,” he said. “To say hello and goodbye. Nothing sexy.”

“Sexual,” I said. “Say ‘sexual,’ not ‘sexy’ there,” though I wasn’t sure why I thought that was better. “What other swear words do you know?” I asked.

He told me, blushing, that he picked them up from movies. He thought it would be unprofessional and offensive to ask at work. He knew, “motherfucker,” and “cocksucker,” and “bullshit.”

He looked surprised. “How did you know?”

I told him that my father’s mother was from Hungary and that my dad liked to teach me and my brother all of the dirty words when we were kids. To get us to say them in front of my grandmother.

I had told him, in passing, during our first meeting, but had no real reason to bring it up again. It hadn’t seemed important. I was supposed to listen while he talked, not the other way around, and it was really only a kind of coincidence. It certainly didn’t make me a better language tutor.

When we started the lessons, I had called my dad who I hadn’t talked to in weeks. I told him I had a Hungarian student who wanted to speak better English.

Andor asked me what other words I knew.

“Just a handful of food and curses. My grandma used to make kifli with apricots. My dad used to call my mother his ‘kurva.’”

He looked puzzled. “He knew this is ‘whore’?”

“Yeah, he only said it in front of my grandmother to get a rise out of her.”

“Oh, um. To make her mad on purpose. But sort of teasing, embarrassing. I don’t know much about his side of the family. They’re mostly all dead anyway.”

We were silent for a moment, each taking a sip from our mugs, the liquid in them now cooled. I had the feeling of something ending, and it made me sad to think there would soon be a time when I never saw him again.

“What’s the word for a real kiss?” I asked him.

“A romantic kiss. Not a polite one. Like in a movie.”

“No,” I said. “Like ‘choke’?” I wrapped my hands around my own neck to demonstrate.

He nodded. “It can be romantic but respectful also. ‘Kezét csókolom’ means ‘I kiss your hand.’ You would say to a friend or a teacher.” He took my hand, lifted it, and brushed it quickly with his lips. He looked at his watch and told me he had to go. I folded the envelope with the twenty dollar bill inside and put it in my purse.

Now, we sit across from each other again, the flowers resting on the table between us. He says, “I’m sorry I can’t keep going with the lessons. My budget is not so good.”

I think about telling him he doesn’t have to pay, but I just nod and say I understand. We both rise from the table, our drinks still full in their mugs. He hugs me and kisses me on both cheeks. His body is warm, his lips dry.

I wait at the table and watch his car pull away from the shopping plaza. I drink my coffee while the baristas wipe the tables around me with a dirty rag. When I’m finished, I carry the flowers to my car, drive home and put them in water. They bloom for three whole days.

Aimee Mepham grew up in Dearborn, Michigan. She holds a BA in English from Albion College and an MFA in Creative Writing from Washington University in St. Louis. She has taught creative writing workshops at Indiana University, Washington University in St. Louis, Salem College, and Wake Forest University. Her short stories have appeared in Meridian, River Styx, and other magazines, and have been performed by Liars' League NYC, a live literary journal featuring professionally trained actors reading original short stories by writers. She is the Assistant Director of the Humanities Institute at Wake Forest University and lives in Winston-Salem, North Carolina.