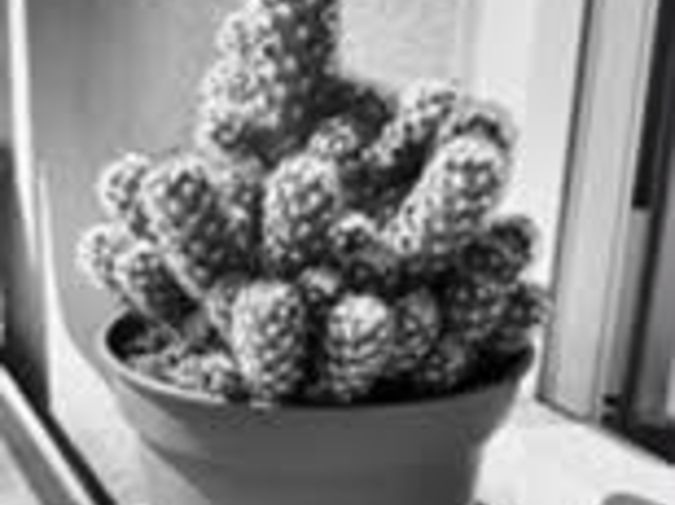 I smelt something unpleasant on his skin and thought I should wash my hands once home. He was Russian or Ukrainian. I thought the wart had regrown after the first procedure but he assured me that it was just tissue healing. If he were to laser it a second time it would scar.

“Yes, exactly,” he said, holding my finger under his magnified eyes. “If I use the laser it will be definitely scar.”

I was tired and wanted to leave. He explained again why he wouldn’t advise the procedure, pressing the lump on the second pad of my index finger. He always wore nice shirts.

I had driven to the laser clinic on Lobelia Drive. The sky was low and drizzle drifted onto the palms growing in islands between the lanes.

I remembered taking the road to visit a girl I might have loved in a psychiatric clinic. She came to South Africa because the price of psychological treatment was cheaper than in England, and she stayed at my house over weekends and after her release.

Shortly after she arrived I was circumcised. Weekend nights she’d sneak into my bedroom and we’d kiss. My penis bulged painfully against the stitches and the repeated, prolonged engagements left it a deep purple colour like a bad mussel. The colour never entirely left the skin and some of the stitches, according to me, never dissolved. The doctors who looked at it while I stretched the skin to make visible the dark lines around the scar said there was nothing there.

The psychiatric clinic was on Lobelia Drive but I couldn’t see it through the drizzle. A maroon skyscraper standing away and above from the other buildings. She bonded quickly with the patients there. A gay boy fell in love with her and I was jealous.

He called her one Saturday morning before overdosing. I listened to her plead on the phone until he wouldn’t pick up. I drove her to the hospital. In the rush I forgot to take my morning painkillers and I felt it resurface as I waited, a wooden pain growing as high as the roof of my mouth.

She invited me into his curtained-off room. He had dyed blue hair and his lips were black from charcoal. He said thank you. I didn’t know what to do except offer a stiff tenderness towards him.

I’d heard her crying before, the evening we returned from the hospital. While she showered, I’d brought her something to eat, a bowl of yoghurt and muesli. I stood below the extractor fan, my forehead against the wall.

Shutting my eyes, I listened, cleft to the weight of my fingers.

They were the sobs of a little girl. I thought of her dad holding her in the arc of his body, the trauma that had brought her eventually to me. I felt myself then as part of the same trauma, filling the same room like some phantom draped over her shoulders.

She said she made boys fall in love with her. I said I was above her manipulations but I cried when she left. When she posted pictures with other guys I felt awful. I tried not to talk to her. Her messages came less and less until finally the feeling calloused.

The source of the wart on my finger, according to the laser therapist, after I told him on my first visit, was genital herpes. I was infected the first time I had sex after the circumcision. It was the only sexual experience I’d ever regretted.

The wart grew and hardened with sweat and dead layers of skin throughout the university year. My friend’s brother told me to cut it out with a knife or scissors. There was no feeling in the wart itself when I pierced the dead skin and levered it upwards and saw the pink polyp legs pulling out of the blood. I felt perverse horror toward this alien thing, its roots like an aloe cutting in a vase of water. I couldn’t get it all out. Beneath the wart was tender flesh that bled and scabbed back over.

When I shook the laser therapist’s hand he smiled. I think he liked me because I seemed grateful for his medical advice and didn’t push for the free corrective treatment. I also think he felt sorry for me on account of the herpes. He remembered lasering the wart the first time. He had lasered numerous moles on my body, saving the wart on my finger for last. He had said it would be very painful because is very deep. He had said he must go beneath di vort.

I had lain on the operating chair while he prepared the needle. Its pain was hard and bone-like. The finger had begun to numb but he lasered too quickly. After its white-smelling fire cut through the dead skin, I felt it shear like a blade of sunlight through the feeling abyss of my mind. I stopped him, more anaesthetic was injected. Then there was only the burning needlework-sounding passivity of my exposed flesh under the laser, the numbed submission of my soul to be cleaned.

The laser left a rim of charred flesh around the hole. I wore a plastic bag while showering until it scabbed. Water on plastic had a strange dry feeling with the texture of water. Afterwards, my hand repulsed me. I washed it in the sink, keeping the index from the flow of the tap. The skin around the wound looked as if held underwater a long time.

The laser therapist’s handshake, his smile bidding me farewell, buoyed me above the scent of his hands and the uselessness of the visit. When I pulled onto Lobelia Drive, the day was rinsed. Plumes of steam rose above the roadside islands, relieving stitches in the parting clouds.

My knee doctor is a very good-looking man. He has a perfectly proportioned handsome face and his mouth rests open, showing perfect teeth when listening and thinking. He wears blue tailored suits and brown leather shoes.

When I first saw him I was hungover and tired. It was early and I wasn’t ready for his handsome face. He looked me in the eyes as he spoke and I thought, involuntarily, I love you. His hand was firm and dry and soft with the firm and dry softness of a perfect man. It gave off no smell.

He told me to relax the muscle. I couldn’t relax it watching his hands move about my knee. He said, “Look at the pictures on the wall,” which were close-ups of young aloes holding heavy drops of water. He said it, face averted, as if this sort of tension happened often with his patients. I looked at the young aloes and imagined middle-aged women and gay men trying to relax their muscles as the doctor moved his smooth dry hands about their knees.

Shaun Pieter Clamp is a writer and editor living in London. He graduated from Rhodes University with a BA in English, Philosophy and Law, and a BA(Hons) in Philosophy, for which he received the DCS Oosthuizen Prize. At university, Shaun co-edited Aerial 2018, an ISEA writing class anthology, and Abantu: Our Zine, an art and literary zine published through Instagram (@abantu.our.zine). He is the poetry co-editor of the Hotazel Review. His writing is published or forthcoming in New Contrast, Agbowó, and Coming Home: Poems of the Grahamstown Diaspora.