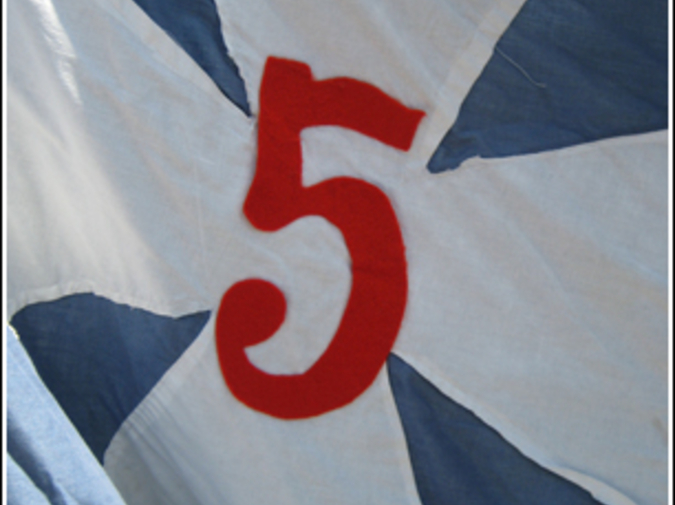 Near a mound of fresh dirt under a sprawling oak tree. Cannons rumble in the distance. Lounging next to the mound is a young man, about 19. He is dirty. Underneath the dirt and blood streaking his face, freckles are visible. He has slightly buck teeth and reddish brown hair.

NARRATOR: So, you just died, right? How do you feel about that?

JIMMY: Yeah. I just got shot. I think that's what happened. I think it was in the head. It's OK, I mean, it happens off the page so I don't really know, but my head is all weird and mangled now. I wasn't very good looking before, but at least now I'm interesting right?

(Jimmy puts hands to his head as if to feel)

NARRATOR: Actually, I killed you off because you're boring. And I think you're hard to get to know. I put you and Henry together and you just never turned into anyone.

(There is a pregnant silence. Jimmy stares at Narrator)

NARRATOR: OK, so... How does it feel to always be living in Henry's shadow?

JIMMY: Well, Henry is my older brother, so that's how it's supposed to be. I mostly let him be in the forefront even though he's a bit of a jerk and doesn't do much of anything right. None of us do. I think that's a weak point of the story. And also the way you have me following Henry around all the time and doing whatever he says. It's like he's the one with all the ideas.

(Jimmy sits up and leans closer to Narrator, who scoots away)

JIMMY: But I've got ideas.

NARRATOR: What ideas? Deserting? That's the only idea you've ever suggested to me. And then you went and got killed so I had to have Henry desert by himself. It kind of messed up my plans a little bit there.

JIMMY: OK. An idea I have... Maybe it was my idea to join up. You know, to get that enlistment money?

NARRATOR: I'm pretty sure that was Henry's idea. Because he wanted to get away from your dad.

JIMMY: Right. Well, then, what about throwing that hand in the poker game?

NARRATOR: Are you asking me whose idea that was?

JIMMY: I'm just saying, maybe it was mine. Henry won a whole pile of IOUs off that hand.

NARRATOR: OK, but are you actually saying it was your idea, or just telling me it could be? Because that isn't really proving your point. What is one idea you've had on your own?

JIMMY: Look. I think you should ask me some easier questions first.

NARRATOR: All right. I really hate small talk, but if you aren't going to give me anything better, I guess we'll try some small talk. So, you're a soldier?

JIMMY: Yeah. For the Union. In the Civil War.

NARRATOR: Why'd you decide to become a soldier?

JIMMY: It pays good. That's why I decided to do it. And because my friends were going to fight. And the girls in the town, they like soldiers, so if I wanted to get a wife someday I felt like I had to be a soldier.

NARRATOR: That didn't really work out, did it?!

(Narrator laughs. Jimmy looks defeated. He shakes his head, dislodging some clumps of hair in the process. Narrator looks away.)

NARRATOR: I guess that isn't really funny, is it? Kind of ironic. But not funny.

(Narrator presses her hand to her mouth but continues to giggle anyway. Jimmy turns away from Narrator.)

NARRATOR: So moving on... Was there a particular girl in town you especially wanted to impress?

JIMMY: I always figured I'd end up marrying Betsy.

JIMMY: Yeah, I guess. But I don't think her dad would ever go for something like that.

NARRATOR: Well, maybe that's why her dad wouldn't really go for it. That's a little young. You know, like pedophile young.

NARRATOR: Pedophile. It's when an adult is sexually attracted to children.

JIMMY: My dad married my mother when she was 14.

NARRATOR: Right. And look how well their marriage turned out.

JIMMY: What do you mean?

NARRATOR: Forget it. So, all this time you liked Betsy?

(Jimmy nods. One can now see his skin flapping around a gaping wound just above his right ear)

NARRATOR: Why didn't you ever say anything?

JIMMY: You never asked me.

NARRATOR: I never asked you? All that time when I was writing and deciding what you were going to do next, you never once thought to say, Hey Narrator. I know! Here's where you can have me tell Betsy to wait for me before I head off to war. Or, Here's where I'd be happy to tell everyone what it's like on the battlefield.

JIMMY: I could do that now.

NARRATOR: You could do what now?

JIMMY: I could talk about what it's really like on a battlefield, not like this stuff you've been doing. Because, how could you know? You're just a woman.

NARRATOR: Fine. Show me some of that. You know, like how you'd describe the battlefield or something. Or, I know! Do the scene right before you died.

NARRATOR: Come on. You said you could do it.

(Jimmy bows his head in concentration. Narrator averts her eyes, but not before seeing a piece of brain tumble out)

JIMMY: OK. War. It's really loud. Like...like the guns are making my eardrums burst. And my hands, they are burning because the gun is so hot, and I get big blisters and they pop and the juice from them is sticky. And I see the face of a Rebel and he has crazy eyes and his gun is aiming right at me. It's like I can see the bullet coming right for me and then it hits me right here—

(Jimmy touches the raw hole in the side of his head. When he takes his fingers away, there is blood on them. He looks at it and then he wipes his hand on his pants.)

JIMMY: It hurts so bad I think I must be dying. Blood pours everywhere, it is spurting with my heartbeat, splattering the ground, my clothes. Pieces of skull lie on the ground and they are bone white and wet looking. The hole in my head it is pulsing and globs of gray stuff is coming out of it. And then I fall down and I hear screaming but it takes a long time before I know it is me screaming.

(Jimmy pauses and then looks up at Narrator, satisfied.)

(Narrator tries to pull a folded piece of paper out of her jeans pocket with some difficulty. Jimmy is staring.)

NARRATOR: The headlong sacrifice of union dead: we must find use for it. It was too horrible to describe: the rotting fruit of Manassas orchards, the blood of Bull Run harvested and stored on cellar shelves with white papered labels peeling and turning, curling to a yellowed tan. Glistening in the congealed slabs of my memory, refusing to soak in, refusing to speak to God of its horror, refusing to name the sinner or the sin, it catches the passersby and slips them down to where we are all covered in it, and dripping. We take it down from the shelves. We look at it, hold it up to the light. See its currant freshness glisten like rubies in the sun. It is beautiful really, the blood you have left here. It has fed us for a long time.

JIMMY: Who even reads that? Who can even understand what you're talking about? I don't—

NARRATOR: Have you got something better?

JIMMY: I just gave you something better.

NARRATOR: No, I mean something better than that.

(There is a long pause. Jimmy looks offended.)

JIMMY: Just give me a little more time.

NARRATOR: Because 160 pages wasn't enough time? Honestly, Jimmy. This is exactly why I had to kill you.

JIMMY: Couldn't you, you know, make me be alive again? Can't you do shit like that?

NARRATOR: This is kind of awkward...

Erin Lindsay McCabe likes writing about people she has never met, places she has never been and times in which she has not lived. After teaching high school for 7 years, she quit to work on an MFA at St. Mary's College of California. This is her first published work of fiction.