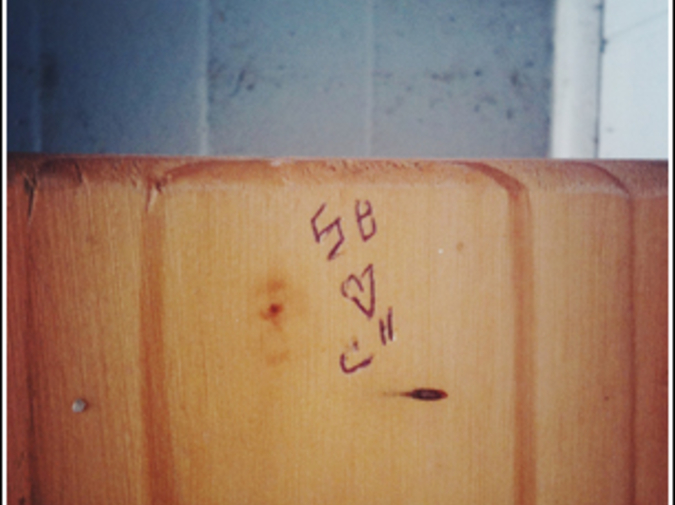 In the weeks leading up to Valentine’s Day, Stacy conveyed a secret to Maureen as the two dined together in the food court at the downtown mall.  They sat overlooking a rather obtrusive Rauschenberg umbrella-frame sculpture in the plaza below, and Stacy gazed through the window at its ribs as she spoke.  “I’m going to give Tom a valentine.”  Stacy was an office assistant who took vitamins, taped shows on PBS, and never flossed.  A cat person.  Tom, happily married, cringed at the sight of cat hair on clothing and considered dental hygiene a cardinal virtue.

“Are you sure that’s a good idea?” Maureen said, without any particular interest in Stacy’s response.

Maureen and Nora were having overpriced martinis at the bar in town where the patrons, to be ironic, wore cowboy hats, boots, and fringe.  Overpriced martinis were the downside, along with an overly earnest New Wave soundtrack.  “Stacy’s going to give Tom a valentine,” said Maureen, who was secretly in love with Nora.  It was meant to be a joke at Stacy’s expense.

“That’s a fabulous idea!” Nora said.  Nora was intense.  Even her physical features screamed intensity—the sharp, bladelike thrust of her jaw and nose, her slender frame.  She was a one-martini gal with the metabolism of a rabbit, a rabbit who dressed in black Donna Karan suits she couldn’t afford.  Inspired, Nora said, “I’m going to do something for Steve, but it’s got to be better than just a card.  Anybody can do a card.”

“Why don’t you build him a gingerbread house?” Maureen said.  Again, a joke.

“Yes!  It’ll be a model of our dream house, and I’ll put little likenesses of Steve and me inside, as in hint, hint.  It can’t miss.”

What a corny idea, Maureen thought.  Could it work?

Steve was content to design gas stations and rest areas and furniture showrooms.  His favorite architect was still Frank Lloyd Wright.  Maureen pitied him, but she hated him too, as he was about to receiveher gingerbread dream house.  “So I hear Nora’s making you some giant gingerbread thing for Valentine’s Day,” Maureen said.

“Yeah,” Maureen agreed, though there was nothing of substance in Steve’s statement with which to agree.  “That’ll be awkward with Kendall around.  What if they get in a fight?”

“I don’t know.”  Steve was uninterested in the possibility of violence.  “Damn,” he said.  “Now I’m going to have to do something really cool for Kendall, better than the gingerbread house.”

How did Steve pass all those physics and engineering classes in college when his development had so clearly arrested at some point in the third grade?

Tom was always searching for ways to endear himself to his boss, Lowell, of Mackey, Lowell, and Associates.  He brought the blueprints of a downtown theater renovation into Lowell’s office and spread them on a seldom-used drafting table facing the window, which overlooked a recent demolition.  “Did you hear about Steve’s latest bit of idiocy?” he said.

“No.”  Lowell looked up, eyes shining.

“He’s having a juggling clown come into the office for Valentine’s Day.”  Tom started laughing, but Lowell sat down at his desk and began rubbing the bridge of his nose.

“Do you know Trudy, the woman who temps here sometimes?”

“Trudy with the short skirts?”

“I’m thinking of taking her to Belize.”

“Let’s just say my wife will like the view of me much better from that distance.  But this clown act throws a wrench into things.  How can I compete with that?”

“No, I need something with broader strokes.  Broader strokes,” he repeated, thinking deeply.  Then the answer came to him and his face bloomed.  “A skywriter!”

Alvin, the firm’s accountant, who meant to express his affections for Maureen, the secret lesbian, was the next to up the ante.  He had heard about the skywriter, so he commissioned a troupe of Taiwanese acrobats and a minor fireworks display.

The secretary, Rita, wanted to embarrass Jed, the firm’s engineer, with whom she’d had a one night stand after he agreed to leave his wife, which he never did, so she invested in trained monkeys that spun plates, a comedian and his ventriloquist dummy, chorus girls, a hot air balloon, and a personal appearance by the guitarist from Cheap Trick.  When news of her elaborate plan circled the office, the others abandoned their Valentine’s schemes, sensing that theirs would pale in comparison to Rita’s.  Unfortunately Rita was a bit of a dreamer and had no idea how much money such a thing would cost, and when she found that the two-hundred dollars of remaining credit on her Visa card wouldn’t even cover the deposit on the trained monkeys, her plot to get even with Jed fell through, and that particular Valentine’s Day passed in the office without any fanfare whatsoever.