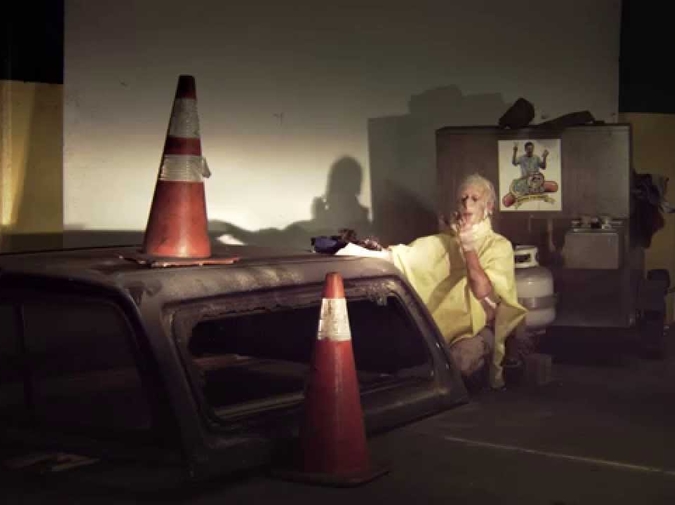 The sad motherfucker trapped in my brain much resembles Bruce Willis from The Last Boy Scout. Together we applaud sterility. I grew up informed by Roger Ebert, but his review of Boy Scout was staunchly prophetic about logging our era through a pinched nose. Hard to lead the charge against your own asswipe and not get paid. I prefer his less hotshot Palahnuikian jaw phase. You know we’re topsy when mister fuddy-duddy is the rare dipshit refusing to sound off with the social etiquette of a scared school principal backed under his desk by some breeders’ cheap outrage. Let’s draw a line in the sand of history. On your side, I’m problematic. On mine, fuck every land. The bottom urge toward a misanthropist (Pixar's so people matter after all) is to hush them into love. Tough love against someone's bitching is a robust Americana sociopathy. For your kind, I got nothing but blood. No complaints. I'm the type of jester who used to heat pennies on the stove and set them on my arm to do an impression of the president. What starfish might rattle in people’s heads? If we printed the pictograph of who steers us, it would likely outline a toothlessly sneezing nugget aproned in meth dung. Where is the sequel with everyone’s joy icon shown twenty years down the road, morphed into a cenobite, gnawing the bedpost it tied itself to, libidinously squelched? Where are the lubricated dimes chucked up it? I’m crusading for Liquid Television’s Pixar parody. Pixar are nimble manipulators of the heart, young and old, and I salute them with the coal that keeps mine dismally continuous. But I was spoiled to ride those seething 90s toons from carnivalesque MTV, The Maxx falling into the we’re so lucky this happened on a national format category, bridging the pandering reality television downfall gap late in that decade, adjacent to the absurd genius of Pete and Pete and Ren and Stimpy, when kids’ programming outright said fuck kids, to adult swim’s original lineup, carried to safety by Space Ghost Coast to Coast, hitting the pinnacle of television with 12oz. Mouse’s Pinteresque dialogue (like someone hit Pinter with a hammer and gave him crayons), the lowbrow meta commercial Lynch brilliance of Tim and Eric, and a Hunter Thompson character on Venture Brothers, not to mention James Ubriniak, fresh off Will Eno’s splendor, with a sharply done podcast in which he plays a disturbed version of himself, and finally, my beloved 4am adult swim spot goes viral, returning a portion of the internet’s genitals with Too Many Cooks, a simple prolongation slasher nostalgia riff then bested by their top sublimity, Alan Resnick’s Unedited Footage of a Bear. Imagine the uninitiated channel surfer landing on Unedited and having to then be so transformed as to take up art, despite their procedural life, scooping out their mash potato eyes to equal it, trying to craft fictionalized tutorials to forward the glee of one's own personal found marvels, weeping against the difficultly of reliving such a catastrophic talent allowed to survive off this contradictory land. Time to only be weeping.