I Remember When I Met U, Baby 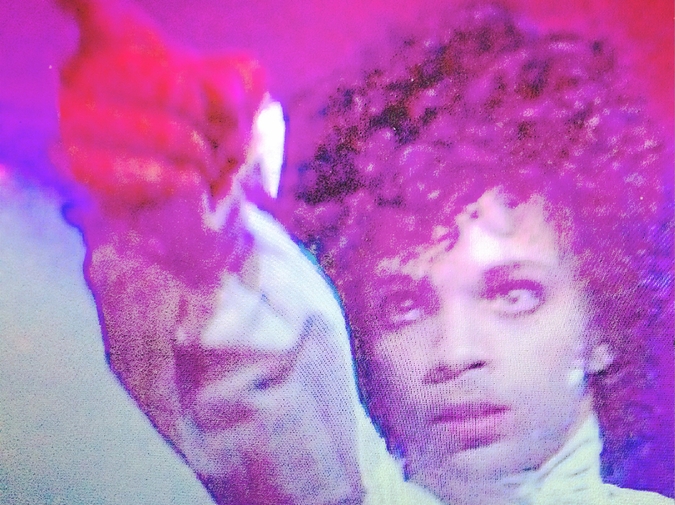 Prince is everywhere in his own head.
Prince is everywhere, but here instead—
lipstick & purple eyeliner smudging every
grand bouquet, gyrating phonograph, bare
shoulder & magnificently-heeled ankle
in this matrimonial piece like regrettable
graffiti. Prince’s B Sides cut into the splits,
then smooth both eyebrows next to other
B Sides like the daddy of a shotgun bride
once all that crying stops. Prince’s side-
buttoned satisfaction, his actionable purpleness
wrapped in lace is the best exit for an I’ll-
call-you-sometime morning. Prince doesn’t
even have a phone. Prince is more disco
vision than lace premonition in 1981—
motorcycling by some star-pocked lake
that ain’t Minnetonka on the way to the studio.
Gigolo of frozen breath & breasts out by
that icebound water glimmering like a dance
floor for every passer by to see. & breath:
in out, in out, breath breath breathe out on
the down beat. Prince says it like: in out in
out breath breath breathe on, as a turn on.
Prince wears his makeup to bed so his face
is always on. Prince is from the Midwest
where one yellow is as bright as the next.
His ambiguity yellowing behind blushed
solos, falsettoed cheeks, risky improvisations
of hair & baby, they were all there—5
star-eyed points spinning like a misdirected
guitar. Prince is every bit of misrepresented
satisfaction in Minneapolis or Indianapolis
where every yellow boy with a curl know
eyes wide, then locks dripped to one side
makes a close-enough Prince every time.
But you said I could in some kind of royal
transference. But you said high-heeled
attraction & big glasses come next. Prince
knows a whole lot of men wore heels before
ladies showed the real elegance in them.
Prince counts to 10 starting at 10. His right-
handed love life arranged like 10 blurry hearts
right there on somebody’s bedside table. Right
before a thumping montage of motorcycle
rides takes him to an airbrushed after party
where all the ladies & men in his purple circle
believe in impossible gestures like I’m just
a virgin & I'm on my way to be wed. That’s
when the purple doors open into steamy
bathtub of surprise. That’s when there’s
an impossibly-deep Prince breath & then—

Adrian Matejka is the author of The Devil’s Garden (Alice James Books, 2003), and Mixology (Penguin, 2009). His most recent collection, The Big Smoke (Penguin, 2013), was awarded the 2014 Anisfield-Wolf Book Award and was a finalist for the 2013 National Book Award and the 2014 Pulitzer Prize. He is the recipient of fellowships from the Civatella Ranieri Foundation, Lannan Foundation, and the Guggenheim Foundation. He teaches in the MFA program at Indiana University in Bloomington.