I Love You Because You Don't Exist 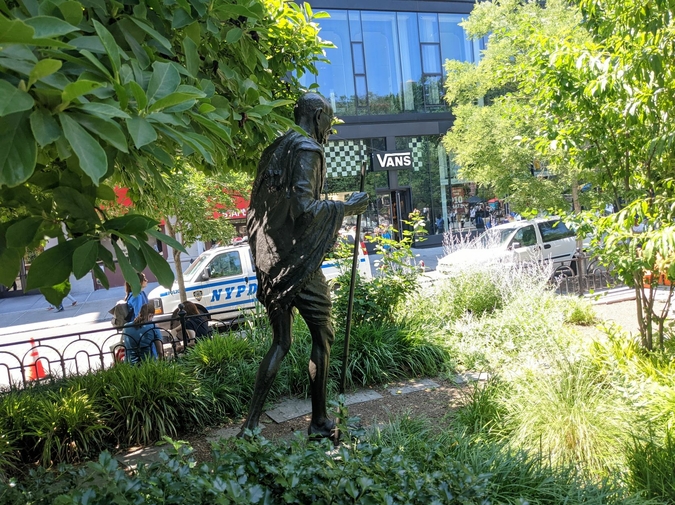 I told you to meet me by the Gandhi statue. I found you sitting on the steps dressed in black.

You noticed I was shaking and said you'd been shaking last night in anticipation of sharing your writing at the literary event.

‘I don’t know what I’m trying to accomplish. I guess I’m just torturing myself.’

I’d waited so long to be in your presence; the distance between my ideal and reality was hitting me. I hadn’t eaten or slept. I’d put on a nice outfit to increase my confidence.

‘You called me a narcissist,’ you said.

I looked up from the dirt and your eyes were staring into mine. I didn’t understand why you would do that.

I’ll stare you down until you’re young

give you the love your parents never did

maybe not this time around

I couldn’t hold your gaze. I wasn’t the person my poem claimed I was. I kept looking away.

That night I wrote about you and texted you what I’d written. You said, ‘You’re too nice to me.’

You asked if I wanted to hang out tomorrow. I said yes, not understanding whether ‘hang out’ meant ‘have sex.’

I met you at Myrtle and Wyckoff. We walked together to Maria Hernandez Park. I was feeling calmer until you pulled out a joint.

I was being shy again and you kept filling the space. You smiled but didn’t laugh.

I was distracted by the fact that you were primarily seeing the left side of my face, the one with more acne scars.

‘Do you have a lot of stomach problems?’ you asked.

I started replaying a memory of the last time I saw you, before the plague, when we fucked in my bed while both succumbing to alcoholism. I had lain there for some time in the afterglow. You had been on the edge of the bed, quietly weeping from the guilt of your wife.

I picked a blade of grass and started tying it in knots.

You pointed at someone’s cowboy boots and said you love to observe how people express themselves through clothing. I thought about how when I’m walking I focus on trees and inanimate objects.

I could see us judging each other for little things.

Maybe if I’d asked, we could’ve just stared at each other. It’s probably better we didn’t. It’s easy for me to get confused.

That night my roommate Nelle and I walked the perimeter of the graveyard singing along to Tove Lo blasting from my phone. ‘No one dies from love, guess I’ll be the first.’ We laughed.

The next morning in bed my eyes started tearing up at the same moment as rain started falling outside my open window.

My phone buzzed. I had a WhatsApp voice memo from Mae, my friend in Berlin. It was about going on a date with a man she felt ambivalent towards and noticing herself repeating a pattern where she becomes performative and tries to be viewed as attractive so she can feel accomplished when her efforts succeed.

She said her conversation with the man had grown halting and at the end he confessed he felt very nervous, and mentally blocked, because he was so excited about her.

‘I had kind of already decided I wanted to kiss him, and his heart, oh my god his heart was pounding so fast. But we were very compatible kissers,’ Mae said. Regardless, she didn’t think she wanted to see him again.

I sent you what I’d written about our second meeting and you replied:

it’s funny how your clothes are so important in your writing and you don’t pay attention to others. no?

i like looking at people’s eyes more if i can muster it, than their clothes

i try and avoid those

well, faces. eyes would be ambitious ya

I wondered if we were now in a competition to prove the other one was the real narcissist.

That night I lay in bed reading an interview on my phone with the writer you’d called confident and brilliant. She spoke eloquently and decisively about philosophy and had a PhD. I started weeping from jealousy. Not because you liked her, but because I wanted her confidence. I pasted quotes from her interview into a note and sent it to you.

You asked if I wanted to send you the latest version of my story as a Google doc so you could add comments. You offered to send me one of your stories in  return. Nelle read my story and said I only write stories about men. Maybe I make men into muses; that’s not what I’m doing here. I’m thankful you let me get to know you enough that you are no longer an ideal. Unfortunately it doesn’t stop me from loving you, but it does stop me from obsessing. When I say I love you I don’t mean I want to possess you. I’m not talking about your dick.

Katie Frank is an artistic babysitter who lives in Queens. She's had one other story and some poems published so far, by Muumuu House. She tweets @slackenin.