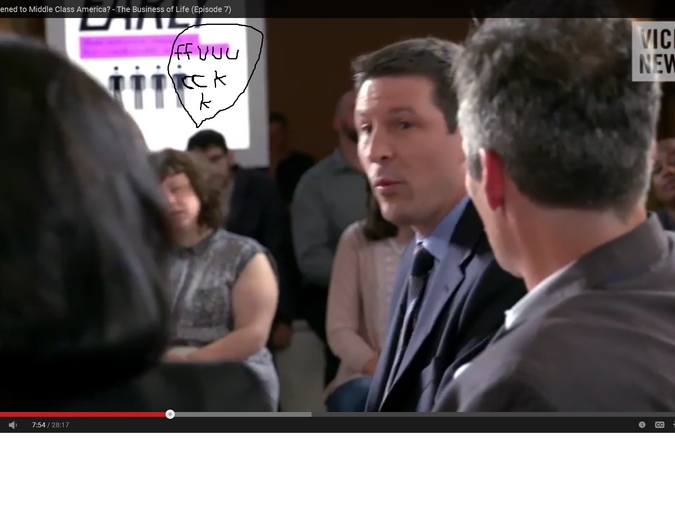 Charlie LeDuff feels made popular by vengeance or is too rich, American sin of his eccentricity notwithstanding, due to the working class mime routine he’ll hustle before a camera. He's much richer, one may sneer, than how he politically categorizes himself to win crowd favor as a real standup guy with just a hint of gonzo panache. But he’s more standup than guy. That’s why I like him. He’s mostly balls until the humanistic postulations inflicted on any journalist take over. That’s why the Pulitzer. The man’s bouncy, a photogenic Hunter Thompson for those not quite as doomed and willing (opulent fatalism doesn’t fit on a profile page). His gesticulations are thrown forth with a certain amphetamine virtuosity, the well-used brain’s industrial tic, how a writer’s nervous system can collapse when everything remains so stabilized outside the skull. He’s like the factory worker that fucked your pizza and won a trophy. His book wears the only title a book about Detroit should. Trust me, his bullshit is supreme and his character is worthy of all the babies his generation still insists be made. So many organ grinders abandon their crib, but this pundit tends to vibrate holier than his affordability. My type of psychopath, who keeps a gun ready, but would rather choke you eye to eye, or barter with you in a David Patrick Kelly voice if you get him first. I required drugs to sit beneath the same chandelier.

He suggested me into his focus. A glance rock stars typify: I’ll fuck you once, or up, whichever. I’m sure I wasn’t really seen. Not to imply I have been. (Takes another Columbine for someone of my generation to get their name in the paper.)  I was already lost one yard into The Masonic Temple. They handed me a release form and told me just spit for the byline. A hip group of us sauntered in place on some purchased marble. All our parents had loosed us from the same linked room to roll benevolently through each other’s politics. Of course no one spoke, standing craned by palm light in a hallway fit for the assassination of a lower-level city official. Then we were called into a ballroom to discuss the middle class. The space bore a plaque with its own subtitle in Harry Potterese. Guard tower floodlights pivoted over the octagon. Boxes painted minimalist Kubrickian white, made of hollow wood so you might audibly roll the bones of your ass. Tiny and gorgeous bustling of young professionals arranging other young professionals into an ethnocentric rainbow. A crowd no camera could spare. I think they blurred me out with feces.

Michael Moyniham, bone structure fating him to always host, sporting an admirable croak and a winsome sense of “fuck this”, roll-called the topic, witty about the tutelage of several choreographing camera crew who swooped through the crowd with scorpion intensity, machines corseted to their bowels, crouching silently in front of LeDuff’s disruptions. He kept interrupting the squares to his left and right till I thought no sex ever seemed consensual. It was a tennis match he played with his cock on both sides of the net. All I remember is the misreported blunder that a perpetrator of the middle class collects ninety G’s a year, which could fund eight of my pastel clones. Failure led me to wipe one unrelated ass too many. Whoever these people are, they are guillotine rich. Working class braggadocio won’t lubricate me here into a white reversal concerning street validities, having been raised inside Detroit, etcetera to that shit, but the gift of not having much is you get to hate the entire catalogue. The profiteers and survivors toting the ideal beyond just a scream are probably overtly misty or the children of some secret bank. The cogs living it out are tired from work and yelling at kids. Everyone else appears pretentious to them because they refuse to think. Who can blame them? The fingers are in the ears in this country more so than in any other and it’s the coolest thing about us: we’re perpetually not having it. Besides, that wax is what shines our gun wounds best.

The adult who pays taxes believes something of the road is his. It is an ownership earned under the dollar sign hung around humankind’s incessant and supposedly necessary expansion. Society has turned labor symptomatic beyond craft, enforced with a platitude gluttonous beyond its quota. Really, the citizen is taking pride in shilling out, in order not to feel robbed by another mandatory contribution – overcompensating denials from the recently burgled. The human condition burgles itself. It’s like tickling a magazine. The effort unibrows need to wink. But what complaints can be made? Life’s internment didn’t begin with the nine to five work week. We were always the only device of our sagging. Pain keeps us simpatico. The more adamantly trite, the louder the person’s fear, the better quality of our being lost, from every turntable intellect, each aesthetic precipice to the bottom comments of its page, our bug-eyed syndromes stare back at us and another abdomen gets paved. Yet, the biggest sacrifices come from greed, not sainthood, though the working class usually totes the god line, too. They’re busy enacting a different, louder flavor of our equally disgusting and common human tripe. And this is where LeDuff breaks my fucking heart with his familial sizing up of himself as master halfwit prolife.

There’s so much freakshow in you, Charlie, I thought: I love you, but, look, you’ve been treated like a citizen enough to have cop friends. Sometimes I think you think all creative expression falls under Reganomics. Then he’s in my face with six reasons why I’m hardly pubic or adjusted. Yes, I’m a pussy. I get it. The working class pack functions to delude itself, shouting one another this line until we go serve ourselves killed to prove different by the longest and most boring methods. I am spoiled temporarily in my hole, plodding through enough art and occasional substance abuse to cause permanent sense derangement before money finally catches up and I opt out. I’m talking the old kill you lineage. The one that lasts. Being killed is the only thing that lasts. It’s no less a delusion than anything committal, and you can surely walk both lines, many do, art and family, but the art ain’t in your member, even though it feels like it, so don’t strut such a jokey importance on the topic of having a life, you’re just another Jesus climbing the cross of condoms you should have fucking used. I’m making a decorative point about how some writers need to live blown out in the asshole of whichever society omits them. Instead, the refusal of this anti-ethic is always everyone’s go-to idiocy. I feel the gutter until it’s me. It’s too purposefully sensual not to be at least twenty percent crippling. The gun goes in one’s mouth for euphoria, not as a lament. Everything sketched, captured, depicted means to render the ejaculatory fuck you death throe to the audience of a hospital ceiling. So get your shit mean for real, motherfucker. Good if you’re a lion for your cubs, I applaud your cargo, mister. Much prefer if you loft it on the page. I’m just jealous because I have to hit each of my sperm with a hammer before they travel anywhere and I’ll only resort to optimism when flamethrowers grow on trees. But you’re brave. You’re all just brave.

If LeDuff is too nouveau riche for sorry, lemme fail a preface from banishment about how I wasn’t raised white either and try my best to be like none of us, SSI or not, but the damage to my person is hopefully done while the self-made man dies on the spokes of his castle. Everyone’s conservative now unless you want to hold hands. There was never anything worth conserving. The author of American Autopsy has scraped the gangrene off his fireworks and I refuse to earn a reputation to besmirch. Is a little subversive hate for the fuck of it a retro cliché, or does my hate contend? Let our pending coffins be well brokered. I don’t care when the conquered rise up because I was born with a gun in my mouth too (you can seek one out if you weren’t) and it feels like an ungrateful rejection of the preferable bottle. Any scream’s exquisite.

When they gave the group a break, before Q and A, I wandered through the labyrinthine temple built for the merely honorable mysticism of so many bawdy, ancient pelvises. The bathroom attendant handed me a tool he called “The Pear of Anguish” while I stood shivering at my urinal. “To disperse the flow,” he implied. I went home and vomited up my little cardboard smiles just to tell them hello again. I had not spared myself the kindling of some vague impossibility, mid-technicolor, of finding employment and a living wage, a community of the like-minded here with the niftily presented counterculture. I’ve lost loved ones playing second fiddle to the foundered deification of millions of bound, illiterate syllables. Maybe a fellow maniac’s blurb? Here it is, or not ever, and thank you, fellow bastard: “I never almost met someone so willingly truncated or with such an urge to borrow every fetish.”