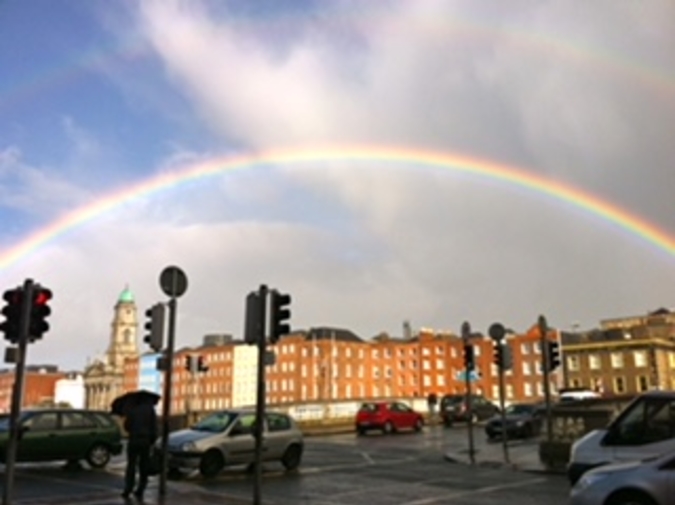 Pre-dawn, my sister drives me to the Indianapolis airport so I can fulfill a summer dream. But first, the journey: I must get to the land of literary milk and honey.

I fly on two planes (a shuttle between terminals to make my near-miss connection), board a bus for an hour-long ride to a taxi-filled train station, and finally, I split a cab to the campus in upstate New York where I’ll spend a month writing poems.

Throughout the day of travel, I listen to two songs: “Take Me to Church” and “From Eden,” both by Andrew Hozier.

It’s 2014. These are the only songs released by the now-heartthrob Irish musician—but right now, hardly anyone knows him. Staring out the bus window somewhere near Albany, I almost hope no one else will find his music. The songs are such darkly intimate gems—“I slithered here from Eden just to sit outside your door”—that I want to hoard them, keep their lush lyrics for myself.

The woman I split the cab with turns out to be my roommate. I make her listen, too. We swoon.

Most days after workshop, I run the treadmill at the campus gym. I continue playing the two songs on repeat. At the end of the second verse of “Take Me to Church,” I can rely on Hozier to proclaim with conviction, “This is hungry work,” and each time, I forget about my wobbly hungover legs and cigarette wheezy lungs (thanks, young poets).

In the fall, Hozier releases the full album, a self-titled debut. From across the country, my writer friend and I text each other gibberish in all caps.

Throughout that first week of listening, we update each other on new favorite lyrics. Let me put it this way: if I were to write them all here, it would take less space to list the lines we don’t mention.

His music can turn the misery of unending travel into a lyrical wonderland you hopegoes on forever. And better than that, he helped me make a friend.

Mary Ardery was born and raised in Bloomington, IN. More of her work can be found in Sweet Tree Review, Unlost Journal, and Best Emerging Poets of Indiana. She currently resides in Carbondale, IL where she is pursuing an MFA.