How Many Hours Are There in a Day Now? 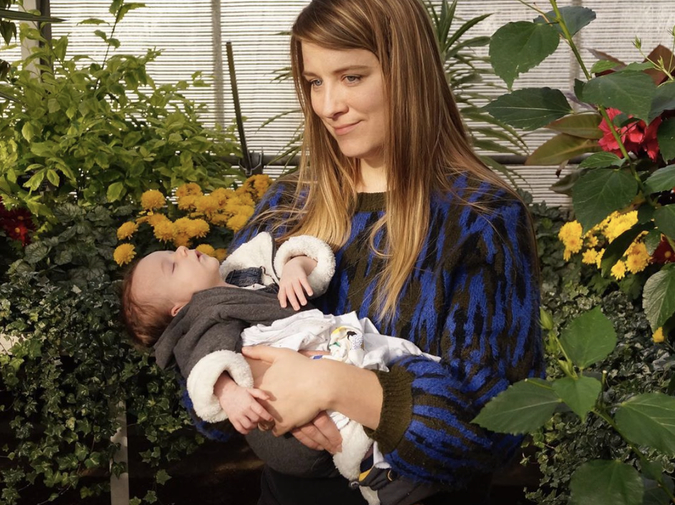 Two-and-a-half weeks before our Stay Home order was announced, we stocked up for an apocalypse. I panic early and often. I was born to worry. A lifetime of worrying over nothing, and now, finally, I am vindicated. We cleared out new shelves to store canned food. We bought several cans of something called ‘wax beans.’ I picked out all kinds of foods we don’t normally eat, because I want the baby to have a varied and healthful diet. If anything, we’re eating better than ever.

The baby has started sleeping in ten-minute intervals, waking up approximately seven hundred times per night to whine or shriek or just sit up, happy and awake, his striped sleeping gown wrapped around his legs. We hold him, pat his butt, sing soft songs, put the binky back in his mouth, nurse him, kiss him.

“Sleep,” we say as persuasively as we can.

We go to bed at 6pm and leave the room twelve hours later with four hours of sleep like some kind of psychotic riddle.

I drink coffee in the morning, even though I do not want to be a coffee person. It jacks me up. We make elaborate breakfasts. What else is there to do at 6:22 am? The baby crawls around our feet, opening drawers and cabinets as far as the child locks will let him. I intercept pieces of onion skin just before the baby sticks them in his mouth. I sing jingles from old overactive bladder medicine commercials. The baby grins and excitedly thrusts his fists into his lap. Aww, he loves the overactive bladder medicine commercial jingle!

Sleep deprivation is more mental than physical. I feel tired, lmao, but more than that I feel extremely irritable. I argue with my husband about things so minor it is impossible to explain them with words, so we end up arguing about how and why we argue, which is still something of a mystery despite how often we argue about it. Neither of us gets to leave the house.

There is little evidence, in the daytime, of the baby’s long, restless nights. Everything is amazing! Everything is a new amazing thing to lick and tear apart and try to choke on! When I was young, I joked about the various demented ways I might bring up a child. “What if I kept him from ever seeing anything blue? What if I told him crackers were called knives? Hahaha.” He doesn’t know people exist outside of the three of us. Hahaha. He doesn’t know there is more world beyond these walls. He is learning that different patterns of pixels and audio are called “Grandma” and “Grandpa” and “Nana.” He loves to chew on the device that houses these bits of data.

Being sleep deprived while in quarantine is like living in this dream I had a few days ago where I died but didn’t lose consciousness and for the rest of the dream I floated over a muddy creek with no ability to interact with the world in any way.

I still do frantic Google searches at all hours like I did in the very first weeks of the baby’s life:

Baby 7 months sleeps bad what is solution
Is my 7.5 months baby teething or sleep regression
isn’t a baby supposed to sleep like 12 hours or something
donut delivery spokane washington

I don’t read the results. I scroll, seeing nothing but a blur of answers, proof that other people also struggle. I know there is no helpful information on the internet, only conflicting anecdotes, uncredentialed strangers arguing about what is or isn’t safe, and articles that fairly closely describe my situation, but not closely enough to be of any help.

Sleep deprivation makes me enjoy sleep less. I dread the nighttime. I dread the sound of the baby’s binky slipping out of his mouth as he slips out of consciousness, signaling the beginning of the ten-to-forty-minute countdown, wherein I struggle to make myself fall asleep as quickly as possible so as to maximize my own asleep time, a stressful process that keeps me awake.

“What should we make for dinner tonight?” I ask, flipping through an issue of Bon Appetit. “Something with goat cheese?”

The baby cries, wanting to be picked up off the dining room floor. My heart swells with a level of empathy and love I would have previously thought impossible. My heart is being very extra, and I let it. We sing “Elmo’s Song” as a family. Somehow I’ve gotten everything I’ve ever wanted. I’m stuck inside with it every moment of every day. “It’s naptime, bitch,” I say to my miracle of life. It’s 8am as we head back upstairs.

The baby likes being held tightly, rocked lightly, tapped on the butt, and whispered sweetly to about my love for him while he dozes off, with a combination of sea and wind noise playing in the background. I should put him in the crib, but he’ll nap longer if I don’t, so I often don’t. I sit holding him, awake, jacked on coffee, in awe of his exquisite beauty and easy joyfulness. I kiss his little fingers as he sleeps. I can’t believe what I get away with. Can you imagine having your fingers kissed as you slept? Seems horribly invasive.

I scroll Instagram and Reddit and Twitter for something, not sure what. I never find it. But the scroll is long, some say endless, and I find that comforting. People post about their gardens, their homemade masks, memes about inequality, jokes about the apocalypse, critiques of our idiot leaders that are poorly written but that I upvote anyway to show my solidarity with people who think other people are idiots.

The façade that anyone anywhere knows what they are doing is crumbling. Or, there was never any façade and we were all just collectively imagining it. It is possible ‘façade’ is not the right word here. Anyone with any power to help is just scrambling to enrich themselves as we all wait for the economy to crumble beyond recognition. I’m laughing as I write this. We’re on the brink of societal collapse and I don’t know how to use a gun. I don’t even know how to pack the freezer so as to avoid frozen bags of unidentifiable liquid flying out and injuring me every time I open it. While I’m making a list, I also don’t know how to spell my own middle name. I have to look at my ID if I’m doing anything official.

I used to believe that other people had it more together than me, and that’s why they were in charge of big important things like justice and leadership and owning companies. I thought they had all studied harder than me, earned the respect of their peers, and had a passion for what they did that made them suitable to be in charge. I’m laughing!

When the baby wakes up from his nap, he is extremely excited to see me. There is no better feeling that I’ve ever experienced. How did I ever live without knowing this feeling? And what to call it? Because I’ve already been using ‘love’ for all sorts of wacky shit. I have an urge to lick his head, like I am a lioness and he is my cub. To my credit, I suppress this urge.

I drag us back downstairs to the kitchen and set the baby down as far away from the onion skins as possible to give me a few moments before an onion skin interception is necessary. Somehow there are always onion skins. I turn the kettle on for more coffee. I look at the time on my phone, expecting it to be 3pm several days in the future, but it is still only 8:49am today.

I start an argument with my husband because he is doing so many home projects, leaving me to hang out alone with the baby, which is my very favorite thing to do. It’s a hard thing to explain, so I give up trying in the middle of a sentence.

I consider buying a FitBit so I can measure exactly how little sleep I’m getting, just for fun.

I consider making a cake that will take eight hours to make and that I don’t have any of the ingredients for.

I consider buying pants from one of the many online retailers desperately sending me coupons. I don’t want anyone to have to go to work and risk their health just so I can have pants, but I also don’t want to wear my maternity leggings forever. Or maybe I do, to both things. Is this relatable?

I look at the clock on the microwave and it is 8:52 am. I wonder if I’m more tired of being awake or more tired of being in the kitchen. I decide I’d live with sleep deprivation for the rest of my life if it meant the baby and I could go to story time at the library. The last time we went to story time, before anyone started isolating but after there were coronavirus deaths in our state, one of the other babies coughed and I thought, “Fuck you.” This is the kind of personal interaction I miss so dearly.

The next thing I know, my coffee is cold, so I microwave it.

Chelsea Martin is the author of Caca Dolce: Essays from a Lowbrow Life (Soft Skull Press) and Even Though I Don’t Miss You (SF/LD Books) among other things!!! jerkethics.com