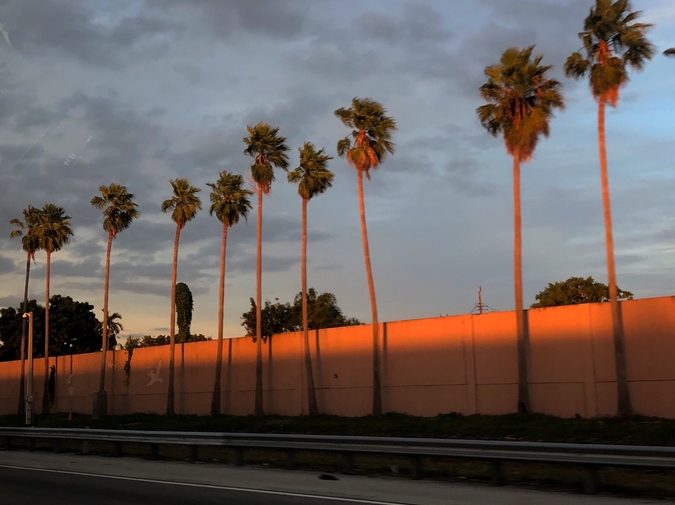 I’m standing on top of Drew Barrymore’s star and the song’s issuing from a hot-purple Sony boom box someone set up a few feet away. The song is a little-known B-side called “Sargent Shriver.” My mom used to play it on cassette tape while we ran errands. I always liked the gooey synths. “Oh, Sargent Shriver / Why’d you go and roll / down Hickory Hill (oh oh oh).” It’s fine—no one on the boulevard will notice if I cry a little.

They flip-flop away, and I don’t feel like going after them.

The heat is eggy, serrated. Minnie Mouse takes off her head and chides me in Spanish. She hocks a quicksilver loogie that lands on Drew. I don’t speak Spanish, so I take off my head and tell her, “Sorry, I can’t understand a word you’re saying.” Then I put my head back on.

Someone I don’t recognize is arguing with The Bride from Kill Bill in front of the pet shop. The Bride strokes the blade of her foam katana and stalks off. The person I don’t recognize is in a blue nightgown, ashen makeup, and a white braided wig. They light a Kool and move out of the way when an Elvis emerges from the pet shop with a scarlet macaw kneading his bejeweled shoulder.

A man passes me. He is wearing a Hawaiian shirt patterned in swordfish. The day has broiled him magenta. There’s a kid with him—his son, I imagine. Nine, ten. Weighty-shoed, orange-camo shorts, a Dorothy Hamill wedge haircut. Trailing the man and the son is a woman in the kind of slouchy, off-the-shoulder shirt I remember being popular in the ’80s. My mom and sister used to wear them. They used to shop at Contempo Casuals. I’d sit near the window display and pull the genie pants off all the mannequins as a joke. This lady (the man’s wife, I guess) also has my mom’s ’80s hairdo: that toadstool chop Sue Ellen got on Dallas the year Southfork Ranch burned. And her face is round, stamped with a bright trapezoidal smile, like my mom’s.

The husband keeps chomping through the crowd. So does the son. Maybe they’re hungry, maybe they have snacks in their room at the Marriott, garlic cracker nuts and pink Powerade. The wife stops. Facing me, she screams, “Juan! Juan! Juan!” The husband turns around. The wife beams. “Can we get a picture?” she asks.

I tuck in my lips and push out a brief nod. My head is on, which means no one can see my expression, just the nod. The wife is a foot shorter than me. She rests her head on my arm. The husband produces a disposable Kodak and snaps a photo of us. (The kid refuses to participate.)

“It’s free,” I say. She pulls a stick of fruity gum out of her brocade purse and presses it into my sooty webbed hand. Some compensation!

My mom hated gum chewers, absolutely hated them. Spearmint could maybe get a pass, because at least you were trying to better yourself. Fruity was just indulgent. The lady and her family move along. Dusk is at the door. The song ends on a coo, a holy-rolling chorus of doves.

Brandon Sanchez has also written for The Wall Street Journal and America. Follow him on Twitter at @offbrandsanchez.