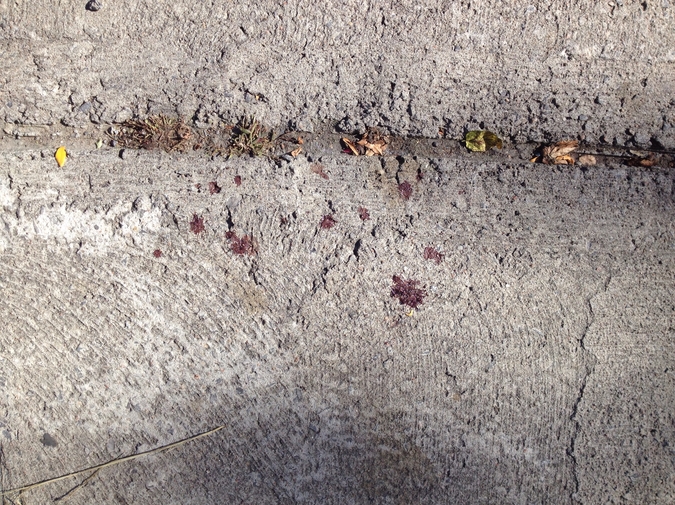 Montréal in the fall is quite beautiful. The late summer humidity has finally fucked off for another ten months. The leaves of trees are turning golden yellow. Bright red. And the thought of the long winter coming is just a thought. Still far enough away not to damage the psyche.

So I decide to walk uptown and back. About forty-five minutes each way. I reckon I can get some hamburger meat for later. Maybe burn off a little of last night's beer in the process. I'm getting older. And I do have my figure to worry about.

On the way back home I cut through Cabot square. A recently renovated public space named for noted explorer John Cabot. Or Giovanni Caboto if you prefer the Italian. As I pass I look up at his statue. His right hand held flat above his eyes. To get a better view of the horizon.

But normally all Johnny boy sees is the benches here full with homeless drunks. Hooting and hollering. Smoking meth. Pissing in the bushes. Whooping it up. All in all…making me jealous.

Though today it's quiet. I tell myself the police must've come through this morning. Handing out ultimatums. Or maybe it's still too early. And everyone is sleeping off Wednesday night at the YMCA a couple of blocks away.

I exit the square. Then rush across a wide avenue. Motivated by the slow count down and flashing hand of the signal. But even more so by the revving engines of the midday traffic waiting. Anxious to see green. Unconcerned about my continued existence.

And I make the curb just in time.

On the sidewalk I follow the direction of the speeding traffic. Cross the side street where the YMCA is. And I come up to the last corner before the road dips down under the autoroute. Towards home. But as I do. I notice out of the side of my eye. Something shaping up.

But things don't look good. There's an old fella on the ground. Face first and unmoving. A chubby bald guy is kneeling beside him. Mumbling words of help. A young bum rushes over. Crouches on the other side of the old man. And between the two of them they get him to his knees.

That's when I get a good look. The old guy's bleeding from between his eyebrows. Thick black-rimmed glasses bloodied and broken lie on the sidewalk. The heavy plastic frames probably saved him from a cracked skull. And a hell of a lot more blood.

They get him sitting up on a waist high cement wall just behind them. The young bum asks the other guy if he has a cell phone. In a heavy French accent he says that he doesn't. Then they both look at me.

Hey man, you got a cell phone? The bum asks me in his raspy voice. And for a second. The piece of shit that lives inside me thinks about lying. Saying no. To just keep walking. To go get stoned under the highway. And forget I ever saw a thing.

But I can't. Because less than a week ago. I was drinking beer in the park with a friend. I heard a crunch. Then the kind of screaming that makes you cringe. When I looked up there was an old lady on the ground. Bleeding from the head. Her bike helmet in one hand.

And you know what? My pal was off the bench. Napkins readied. Care in his eyes. A real decent human being if ever I saw one. But I just sat there sipping my beer. Like I was at a backyard BBQ waiting for the hotdogs to cook. Not staring at an older woman on the ground. Bleeding. Whimpering like a beast.

Now here I am. The same fucking predicament all over. The universe testing to see what I'll do. And if I don't pass who knows what horrors it'll open up to me? So I turn my face skyward. Wink at the heavens. And whisper you crafty sonofabitch you.

What's that? the bums asks. Leaning in to get a better listen.

Yeah I got a cell phone I say without missing a beat. Committed to being in the good graces of cosmic order. I look over to the chubby bald man. 911? I ask. He nods and says yes in his heavy accent.

So I dial the number. Look around to get a bearing on where I am. The phone barely has time to ring. A pleasant sounding woman comes on and says Oui, les services d'ugence 911?

Hey, I say, I got this old fella here bleeding on the corner of Atwater and René-Lévesque. I think he fell down.

The woman on the phone starts asking questions. Like what happened. I tell her it looks like he took a nosedive into the sidewalk. But I can't say for sure. I explain I was just walking by. First one with a phone in his pocket. Trying to be a good samaritan you see.

Of course sir. Then she asks things like how much blood?

Not much, I answer.

Does he seem out of it?

Do you think he's intoxicated?

This one I mull over. Chew on. Because you know it's hard to tell the subtle difference between an afternoon drunk. And an old man who stumbled. Came crashing down. Sober as a judge they say.

So I give him a once over. Long white hair. Maroon leather jacket. Slight hunch. Those glasses. His aesthetic has a definite likes to party vibe. And I tell the woman that he might've had a couple drinks. But I don't know. The fat Frenchman beside me shrugs his shoulders. But the look on his face makes me think I'm not wrong.

Ok, the woman on the phone tells me, we're sending someone out. I'm going to put you on line with ambulance services. Before I have a chance to say thanks she's gone. And another woman is asking the things I just answered.

Meanwhile the old man takes his phone from his pocket. Blood drips from his forehead onto the vintage leather jacket. Disappears in the merlot coloured leather. He dials a number. Cradles the phone to his ear with his shoulder. Starts speaking in hushed tones when someone picks up on the other end.

The woman on the phone asks me about the blood. It's quantity. To be honest. Not much. Just drips. The bum beside me says he's going to need two stitches at least. I convey his worries to the professional I have on the phone. But let her know I'm no doctor. The bum winks and laughs.

Making me think he's not either.

The woman on the phone tells me someone should be there any minute. But she's going to stay on the line as long as she can. She continues asking questions. Making sure that the old man's condition isn't worsening. The bum gets heated. Starts complaining. Just send the fucking ambulance! he says. Puffing up his chest.

Then he hollers across the street. Back over to the church across the street. And now I know where all the drunks and bums are hiding. They're taking their coffee. Sprawled out on the hilly lawn in the early autumn sun. A woman comes running over. Genuine concern on her face.

While people in nice clothes walk by without a thought.

Now the old man is off the phone. And the bum is asking him who he called? I try to hear what the old man has to say. It could be of use. But all he does is mutter unintelligibly. Waving the one hand not holding a bloody napkin to his head. At nothing.

The bum asks him Parle-toi français monsieur? And he answers by explaining that he called his wife. They live a few blocks away. She's coming to get him. Of course all this is said in English. Without even the hint of an accent.

And then I see it. A fire truck across the street. Sirens blasting. Lights flashing. All the stops pulled. Yet still it has it's trouble getting through the busy intersection. I tell the woman I see it. Confirming that they should be here any second.

She tells me that she hopes things work out for the best. I thank her for her help. And just like the first woman I spoke to she's gone like a ghost in the night. The fire truck pulls up. Four dark haired men saunter out with an emergency case. Laughing. Sure that nothing is too wrong.

The fat bald guy gets them up to date. Or so I assume. Their banter too quick for me to pick up. In English a fireman tells the old man to relax. And they're going to hold his head up. Check his eyes. Sniff around for a concussion. There's no fight in the old man. He plays along.

I look oer at the fat bald guy. He adjusts his backpack. Takes a quick look around. Scurries off in the same direction I want to go. Which I take as my cue to do the same. Content I'm not needed.

But before I do. I make eye contact with the fireman steadying the old man's head from behind. I tell myself that he gives me the nod. The ok to bolt. So I take it without any hesitation.

I walk off. The young bum following. He tells me Thanks a lot. It was real nice of you. Not everyone would stop to help. And I don't know what to say. So I just nod my head. Smile. Silently hoping that the bum is just a conduit. And the universe is happy with me once again.

Steve Anwyll's novel Welfare is out from Tyrant Books in fall of 2018. He runs the twitter oneloveasshole.