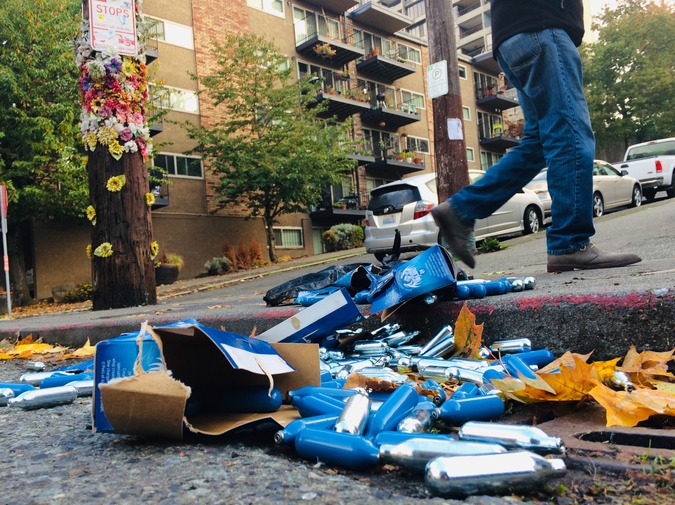 I storm through the living room. Throw open a drawer. Rifle through it and come up a winner. Greta watches from the couch as I flick open the butterfly knife expertly. Like a Filipino gangster. She's afraid when she asks me what are you doing?

I'm not going to kill him, I tell her with a wink and go back out into the hall.

It's been a long summer. And this is at least the third deadbeat who's made the dark corridor beside my apartment his home. I wouldn't give a shit. But the walls are thin. I can hear them scratching around out there. So they hear me.

So as I'm jabbing the knife into the patio lounger. Tearing the makeshift bed to ribbons. I'm laughing with a childlike glee I haven't felt in years. Thinking when I'm done. I should get a piece of paper. Scrawl you're next across it. Really bring it home. But I figure that's going too far. That this should be enough

But it never is.

Because less than a week later. Another vagrant moves in. Now I'm no monster. So I let it slide for a couple days. But when I'm sleeping on the couch the next Sunday morning. And his stirring wakes me. I can't help myself. I see red.

So I get up. Check the time. It's 7am. The fucker, I mutter. I find my jeans. A t-shirt. Slide into an old pair of boots. Unlock the door and go out into the rarely used corridor. It's dark. Emergency lighting only. No wonder junkies and itinerants come back time and time again.

When I come around the corner. All I can see is the tip of his head. The rest is hidden behind another twist in the hall. Weaponless, I approach cautiously. The last thing I need is a filthy needle jabbed in my thigh. But as I stand there. Peering at him. I tell myself he doesn't have the look.

The hood of his jacket is pulled down over his eyes. So I prod him in the shoulder with the tip of my boot. He makes a soft little grumbling sound. And if he wasn't a grown man who woke me up. I might've been able to find it cute. But instead I lean in. Extend my hands. And start clapping 3cms above his face.

He stirs. Grumbles some. One hand unfolds from his body. It half-heartedly waves me away. I let out a long eeeeeeeeyyeeeeeeeeyeeeeeeeyiiiiipppp! like the leader of a wild west posse. Certain they're hot on the trail of their man.

And it works. I have his attention. But it takes a couple more times before he pulls his hood from his eyes. Ok ok, I get it he tells me with another wave of his hand. I ignore him. Tell him that he can't stay here. It's time to hit the trail.

As he rolls up off the floor. Into a sitting position. I take a few steps back. Things are moving along smoothly. For now. But I know that all it takes is a second for the situation to turn ugly. Me bleeding out on this dirty wooden floor. My murderer searching my pockets for valuables. And cursing me when he comes up empty

The bum drags himself off the floor. Then comes on nice. Real buddy buddy shit. I'm sorry. My wife kicked me out. I'm not here all the time. I'm sure he's lying to me. Automatic sob story. So I shrug my shoulders while telling him that I know he's been here for days. And it's time to get the fuck out.

I know man, I know, he concedes in his pleading way. Like I'll change my mind. I'm married, I got an 8 year old, a mortgage out in Chateauguay. Well fuck you, pal. Rub it in. My wife and I rent from a building where bums see fit to squat in the halls.

Definitely not the place for children.

So before I answer. We stand there looking at each other. A pause filled with hope. That maybe I'm a bleeding heart after all. But instead of telling him kind words. The ones he wishes for. I look him in the eye and say go the fuck back to Chateauguay.

He stands there. At first a little shocked I could be so cruel. But it doesn't take him long. His humanity creeps back in. And he calls me a prick like it's the first time. Like it's going to hurt my feelings.

But it has no effect. Instead I shrug my shoulders in response. And remind him that it's time to go. Feeling like I've won. That he got my point. I back away from him. Into my apartment. Locking the door behind me.

And as soon as it clicks. His anger gets the best of him. At the top of his lungs he yells you piece of shit! You faggot! You cock sucking piece of shit faggot!

Sitting on my couch I chuckle to myself as he stomps down the old metal stairwell. Kicking the walls. Shaking the building. Bellowing suck my cock you faggot! You god dammed pussy faggot, come out here and I'll fucking kill you!

Not exactly an inviting invitation. So I don't budge. Only listen. All sorts of violent threats. He's quite creative. It puts a smile on my face while he lasts. But naturally he tires. Stomping away. To find another corner to call his home.

I can hear Greta stirring in the mezzanine we call our bedroom. With care she climbs down the rickety ladder. Sleep still in her eyes. Short dark hair a mess. What's all that yelling? What did you do? she asks in a whisper. I tell her not to worry. That I've been making friends. But it's probably the opposite.

And I have another enemy.