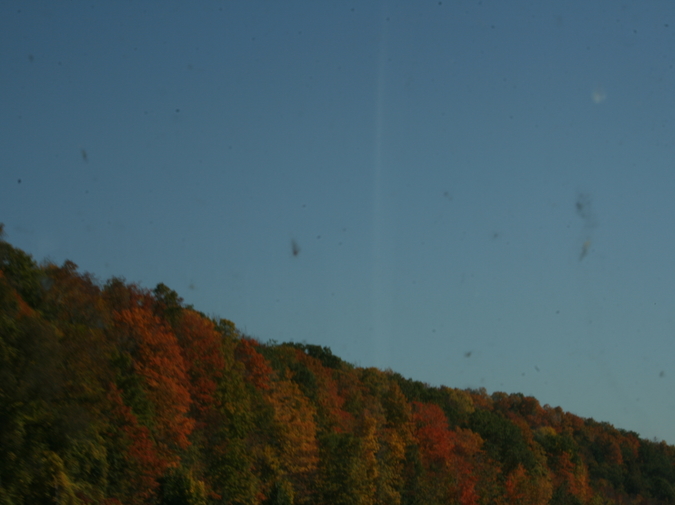 God damn. September is over. I came to this conclusion earlier. Sitting in the park by the canal. I drank beer in the sun. Clutching my jean jacket shut. I still felt a chill.

A stark god damned contrast to recent memories. When the air was fucking thick with August humidity. No one could breathe.

And Christ. Canadian Thanksgiving will be up my ass before I know it. The original thanksgiving. Forty years and six whole weeks before yours. Because in this rough and barren land the frost creeps down from the north early. And after that you're fucked. Eight long dark months staring at you. It's enough to drive anyone to madness.

Traditionally we don’t share the same myth. No fucking buckle hatted pilgrims sitting at a large table with a band of Native Americans. Smiles all around. Table piled high with a real fine spread. No way. Canada was inhabited by guts and glory explorers. Criminals. Whores. The Iroquois knew enough to keep their distance.

But I'll bet you something. If I were to ask any other card-carrying Canadian to shut their eyes for a moment. To think of Thanksgiving. To describe the visions behind their shut lids. I'm sure I’d get some third rate cornball television special beamed in from Los Angeles or New York. And there's no doubt it'd be one great big fucking buckled hat filed to the brim with all the holiday bullshit.

(the sound of vomit hitting the bowl)

Please though. Don’t take my ramblings as harshly as they sound. Childhood memories of the holiday are fond. Sweet. The family of my father's wife coming over for dinner. Her three brothers and sister. Their spouses and kids. They'd all get drunk. Fill up the house with their laughter. Which was a nice break from the way things normally were.

There'd be football on the television. Drinks in everyone’s hand. The smell of turkey and potatoes and bread and ham and gravy and squash and corn and every other god damned thing you could think of wafting into the living room. A King’s feast. I’d sit there quietly. Watching it all go down. Until we finally got called to table for a proper gorging.

But those days are long gone. Yes, sir. I've grown up. and neither I nor my wife have a stable good paying job like the ones our folks did.  We 'foolishly' chose art and love.

So what will the two of us be doing you ask? How will we be celebrating this god damned momentous weekend. Well, since there's no children running about (the result of inter-dimensional beings and their need to blast my balls with heavy ions during their weekly invasive experiments). I guess the sky's the limit.

But if it's anything like years passed it'll boil down to something real simple. Start drinking as soon as the coffee is done. Bottles of beer and wine. We'll wrap ourselves up in blankets to stave off the cold. Too cheap to turn on the portable radiators we use to heat our place. Her parents will call. We'll feign sobriety. A hard thing to do at 10:00 a.m. with wine-stained lips.

After that we're free to let ourselves deteriorate. No more pretending. There will be trips to the dépanneur for more wine. More beer. That’s a guarantee. And if the weather is nice we'll go out for a walk. Smoke pot in the park. Roll around in the grass down by the canal like wild dogs. Laugh like it's our first day out of the bughouse.

From there it's a quick stumble home. and it's pretty easy to fill the insides of a chicken with onion lemon and garlic. Throw it in the oven. Walk a way for a couple of hours. More than enough to time to toss back a few more drinks. Start pulling at each other’s clothes. End up on the rug we got from the church charity shop. Naked. Carnal.

Once we’ve had our fill we'll follow suit like the rest of the country. Lie on the couch in a greasy stupor. Pour back a few more drinks. But somehow the momentum will be lost. And with the lack of magic in the air we'll look as pathetic as the congealing chicken carcass on top of the stove.

But isn't that what the whole thing is about? north or south of the world’s largest undefended border. The reason our ancestors came here. Why people people still come here today. The celebration of abundance. So really. I'll be able to pass out like a pile of trash on the floor. Content. Knowing that I've done my part as a consuming Canadian.

So remember that, Trudeau. I'm down here in the trenches. Pulling my weight. And that's something we can all be

Steve Anwyll is keeping the hoser dream alive. He runs the twitter and tumblr oneloveasshole.