Hinterland Transmissions: 2015 Was A Bad Year 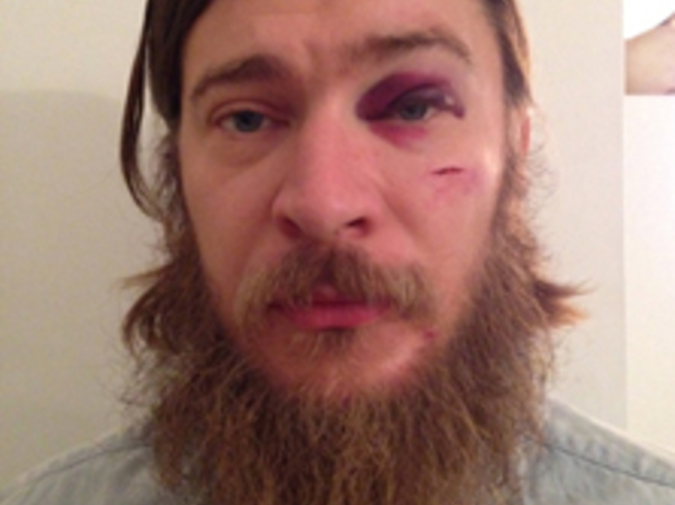 Perhaps as a Canadian I'm more open to hearing it. And my blood boils when I do. It's always some far left American whiner. 'I'm moving to Canada' they say with a finger pointed. Angered brow. Listing candied versions of the reality. A nation of politely bland men women and children all employed by either Labatt's or Molson. A free case of beer every Friday night. And of course. Our socialist fucking health care system.

I run hot and high you see. And under conditions like this accidents are bound to happen. Broken fingers. Toes. A heel. Ribs kicked in more than once. Hell. I almost cut a knuckle clean off with a butterfly knife while trying to pry a mirror from a frame I found aesthetically unpleasing. But if you think I went to the hospital. You're off your fucking rocker. And should consider consulting a physician of your own.

Like the title and photo blatantly shouts out. I didn't have the best of times last year. A couple of good injuries. The kind you have trouble ignoring. The first big one hit in early July. I was coming home from work. Friday night. I'd had a couple beers with another drunk employed there at the time. Puffed a joint in the back alley. When I left I was feeling loose.

My bike ride home is easy. A separate path along the canal. Only a couple blocks of riding with traffic on either end. And when I pulled off the path close to my apartment something caught my eye. An antique bedroom set sitting on the curb out front of the old folks home. Some old fucker croaked. And if I manage to drag the deathbed home I can surely sell it to some chump on Craigslist. Easy money. Fat city, baby.

But it doesn't work out that way. Instead I hit a small orange car. Part of a fleet of chicken delivery vehicles popular in the borough. I have no chance. I'm at full speed. The car is too close. I go over the handlebars. Kiss the back window with all of my momentum. Crumple to the ground in a heap. The driver tries to help. I wave him off. Stumble home. Blue bandana to my bleeding forehead. When I get there I send Emily and her friend out for beer. When they get back I get drunk. Emily keeps me awake to stave off a concussion.

The next day I send the above photo to a friend in Michigan. She asks if I'm fine. And what the doctor recommended. My response is typed laughter. I tell her I've been taking it easy. Staying medicated. But the chance of seeing a doctor is slim. The hospitals are over run. And my 'family doctor' is impossible to get a hold of. I'm alone in the world. She's a little surprised. It's contrary to what she's been told.

I heal up good. A small scar under my eye. It suits me. My bike is a little beat up. But I still ride it the rest of the summer. Until the beginning of September. When I hit another car. This time on my way to work. He pulls out from behind a heap of recycling in a parking lot. It's too late. Up over the handlebars again. But slowly. I have time to prepare myself. A sharp pain runs up my left arm when I hit. Again I wave off help. Go to work. Spend the day screen printing t-shirts one handed. Barely a complaint.

At night I go home and Emily begs me to go to the hospital. My wrist is swollen. But not black. I tell her if it still hurts in the morning I'll go to the emergency room instead of work. I can't sleep because I'm in so much pain. I stay up reading a third rate novel on my computer and eating codeine.

When Emily wakes up I call Info-Santé. A medical advice line run by the province. They suggest I go to the hospital. And that it sounds like a broken wrist. I grit my teeth and give in. But not before taking the metro across the city to a garment supplier to pick up hoodies for an artist I'm doing some printing for.

I get back to St-Henri. I choose the new 'super hospital' as it's dubbed near my apartment. Get lost in its cavernous hallways. Eventually end up in the emergency room. Get a number. See the triage nurse. She checks my health card. Tells me I should've stayed home. I keep it to myself. But think: fuck you.

Before I leave I'm told I should expect a call from the orthopedic surgery department at Montreal General in about a week to assess the damage. And I'll probably be given a space age cast. One I can get wet. I leave the hospital. I walk to the neighbourhood bar to meet Emily and a friend feeling good about the whole thing.

When I get the appointment at Montréal General I have to go early. Register with them. Get another fucking card. But when I try I'm told my health card is expired. I have no claim to free health care currently. I wonder why no one told me this in the emergency room.

The man can help me though. He has to call the Régie de l'assurance maladies du Québec. Tell them my case. I have to speak to a heavily-accented man. Confirm things like age and address. I get a temporary pass. And should receive a new card shortly in the mail.

Things at the orthopedic clinic go as much as expected. Lots of waiting. I amuse myself by watching the invalids. Wondering how the fuck more than one man managed to break so many fucking bones all at once. Consider myself lucky. I get another x-ray. Wait some more.

I see a surgeon. I don't get his name. He checks over my x-rays with a cold stern look on his face. Tells me that I need surgery. A small pin to seal the end of the bone. He asks what I think. I tell him he's the professional. I just put logos on t-shirts. We sign the paper for my surgery. Before I leave they cut my cast in half to make the surgery go easier. I should expect a call in the next week.

The call never comes. I continue to work four days a week. It's not easy. But I manage to push a squeegee of ink through a screen hundreds of times a day for the next five weeks. In that time my temporary health card expires and I don't receive a new one. I make a call to the orthopedic department to see what the fuck happened with my surgery. They give me the number of the lead surgeon on call. The only one with the operating list.

It's not easy getting through. But when I tell them who I am. When I saw a doctor. They tell me they have no record of me. That they'll have to call me back. I start to get mad. I wanted to believe that things weren't this shitty.

Eventually the surgeon and I sort things out. I'm going to need more x-rays. Another trip to orthopedics. I'm at their mercy. There's nothing I can do but follow directions. Wait some more in the crowded salle d'attente of the downtown hospital once again. Feeling more and more like I've fallen through the cracks of a second rate public service.

In the mean time I have to get a new health card. Or they won't serve me when I get to the appointment. I try my luck with the Centre Local de Services Communautaires. A hub for the health service in Québec. My poor French doesn't help me. But I manage to figure out I can get the man at the hospital to call for me again. Relief.

At the hospital I get x-rayed. Then ushered into a small consultation room quickly. Preferential treatment. A dark haired surgeon tries to make his explanations. A long-winded consultation with the entire surgical team. That initially the call for surgery was hasty. And that it seems I've healed fine. I stare dead ahead at him. He mistakes my lack of response for something else. Préferez-vous si je parler en français?

I shake my head and say I heard him just fine.

He tells what I want him to, word for word. That I fell through the cracks. I somehow feel vindication. He tells me I'm the calmest person he's ever met. I explain myself. That my blood is boiling. I'm seeing red. That I wanted to believe in the Québec healthcare system. But it proved me wrong. I see the pain on his face. I got to him.

When I leave I don't have a cast anymore. But somehow I get scammed into paying 35$ for a plastic wrist guard I'll never use more than three or four times. It's a little over a year since the whole shit storm blew over. And now with the damp cold weather moving in I feel the pain shoot up my wrist every morning. And each time it does. I'm reminded that you get what you pay for.

Steve Anwyll's novel Welfare will be out from Tyrant Books in 2017.* He also runs the twitter oneloveasshole.

*for some reason he doesn't want you to know this