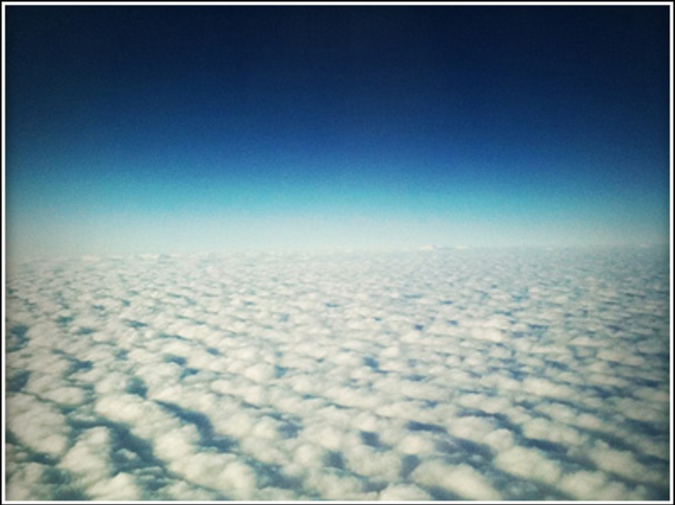 Nancy Lish was a simple woman with one simple obsession: she wanted to be a contestant on the game show Disk & Ladder. Every week she sent her postcard to the host, Peter Stimer, and at last, after thirteen years, Nancy was packing her bags. She blew three kisses from the taxi car, and each of them flew to the cracked lips of her husband, daughter, and son, and the car, too, flew and she through the terminals to the airplane where she would fly from east to west.

During the flight Nancy Lish took short naps against the window, and in the cockpit the pilot philosophized. The pilot thought how people exist between two realities — what they believe to be and what really is. One reality, he envisioned, was a box, the other a lid and people are the hinges between. He liked to watch the stewardesses to determine how far their boxes were open: how far one reality was from the other. If the pilot had known Nancy Lish, he would have found her box to be slowly closing as she came closer to her time on Disk & Ladder because there is where Nancy Lish found her passion. Even on the first day she felt she belonged. As she carried her round disk up the ladder, to slide it into the slot, she climbed with confidence and beauty. She felt her body was built for the ladder, sturdy and stout as it was, while other contestants were too tall, too short, too skinny, too wide, too energetic, or too slow for the game.

Nancy Lish's confidence kept her in the number one spot for over three months. She won great sums of money. She won cars and boats and cruises, appliances, and high-tech videogames, all sent east to her family. Her husband stayed home from work to watch his wife on the television set. He sipped expensive whiskey and rested his hairy legs on his new sofas and chairs. The children stayed home from school and played with their new 3-D friends in their bedrooms. None of them noticed Nancy's contentment, or how her solid gold buttons shined in the spotlight. No one saw how Nancy looked at Peter Stimer the day she noticed in him a common soul, how she looked out over the tall ladder before dropping her red, red disk, how she just knew he operated with a similar fervor for Disk & Ladder. This discovery only added to the rapture of her game.

One afternoon the Disk & Ladder executives met with Peter Stimer to discuss Nancy's winnings. At first Nancy had increased the show's viewers, as she earned, show-by-show, celebrity status, but viewers were growing bored, they wanted a new winner, and Peter had to do something. The next day, after Nancy Lish had won once again, Peter pulled Nancy into the meeting room. At first Nancy thought he would declare their common souls, so sure she was that he saw it in her, too, but what he said to her, how he explained that she absolutely had to lose or they would have to rig the game, enraged her. She cried and beat the meeting table with her small fists. Peter calmed Nancy, and to appease her, he gave her a final settlement, the ultimate Disk & Ladder prize that only a winner like Nancy would be allowed to win. The prize was a superpower, and this superpower would enable her to be anything she wanted. Anything.

In her hotel room that night she cried a little bit, sad to have to walk from the show, but then she began to think of her husband, her children, how she had missed them. She thought, too, of her superpower, all the things she could be: a dentist, a model, an engineer who built bridges. Such a decision, she decided, needed a lot of time and thought.

When Nancy flew home, she flew behind the same pilot. She napped; he philosophized. The pilot continued to think about his box which led him to think about the box as a nest and birds and how much he loved birds and looked at each longingly and knew every one by their right name. Nancy knew the names of only a common few, and noticed, too, that a mockingbird sang loud and clear when she entered her house for the first time in four months. The house throbbed with the stink of sleep and filth. Soon Nancy's replacement passion was to pull her family and her house back together. At last, after much work, her husband and children flew from their nest.

Nancy was tired, so tired she forgot all about her superpower. She spent several days on the new couch watching Disk & Ladder on the television. After a few more days she dragged the set into the bedroom and watched from bed, propped on her fancy new pillows. Boats and cars clotted the long driveway, and her husband and children weaved through them on their way home, until, after several weeks, they stayed home, too. The lives of the Lish's grew untended and sappy. They ate jelly and grew soft. Nancy yearned to be back on her ladder. She watched other contestants climb and hold the disks. Â She yelled at them from across the bedroom. Some days she did not yell at all, just listened to the show with her eyes closed.

One morning in the bathroom a blue bird landed on the sill, it may have been a jay or a finch, nevertheless, Nancy said it, she said it loud and clear: "I want to be you, bird," and as simple as that she flew. No one knows if she meant it or if she had decided at last upon the placement of her superpower, but she is gone, blue against a blue, blue sky. Her husband and children often stand in the yard and look out. More often they stay inside their little brick house. She flew and she flies, and the pilot may have looked upon her a time or two, may have wished he were her as a million Disk & Ladder viewers had long ago wished to be her, and as her children, long, long, long before all that had wished to be just like her, too.