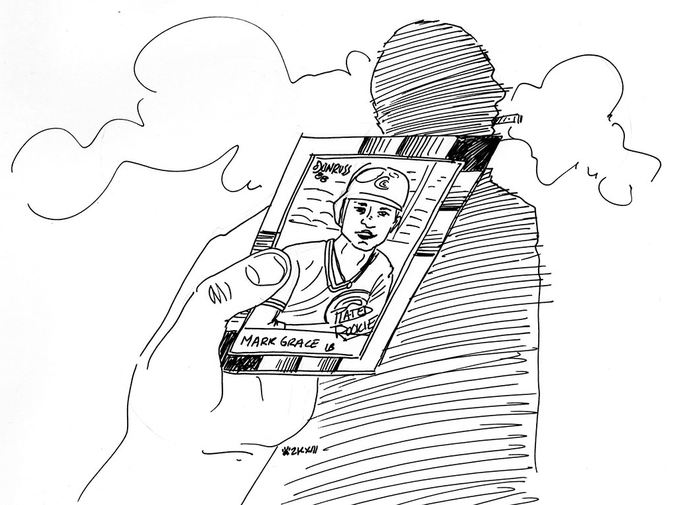 The night before we met Mark Grace, dad had too many Michelobs and was more generous than usual with his baseball assessments.

“He isn’t great like Stan the Man Musial was, but, sure, Grace is a pretty decent left-handed hitter,” dad said.

I was tired of comparisons from dad’s childhood. Was done hearing about the World Series that Musial’s Cardinals had won. And I knew the point where these Cubs/Cards talks always led.

“But,” dad said, “I’m afraid Grace’s talents will be wasted in Cubby blue.” He chuckled. “They haven’t won a Series since before I was born.”

I wanted to say that Mark Grace had just finished the 1989 season fourth in the league in batting with a .314 average. That the Cubs were reigning National League East champs. That the nineties were going to be the Cubs decade.

But Michelob flowing or no, dad wasn’t the type you argued with. So I just asked if he’d ever seen Musial play in person, even though I had already heard dad tell the story more times than I could count.

Dad said if I went upstairs and grabbed him another Michelob he’d tell me all about May 1946 when grandpa took him to Sportsman’s Park for Musial’s record-setting double header.

Moments later I returned to the basement with an opened Michelob, a couple swigs shy of twelve ounces. Dad was lights out. I slid the remote out from under his bearish arms, found a seat on the rug that was too close to the television, and sipped down the remaining beer.

I sat in the passenger seat of dad’s Red Boat—a rusty 1973 Chevy Impala without a working heater that dad cursed to hell every time he started the engine. On this day, though, the cursing never let up as we sped through the snowy landscape. The median and sides of the road were piled high with snow. Dirty, gray snow. Weeks after snowfall. Our destination was a sports cards show at the Holiday Inn located twenty miles north of home in Chicago’s western suburbs. Mark Grace was the card show’s main attraction.

I sat holding and staring at a 1988 MARK GRACE DONRUSS RATED ROOKIE card that dad gave me for my tenth birthday. Grace’s image was mesmerizing. The confident blue-eyed stare. The gold chain. The way Grace calmly knelt on his right knee. Ever since I received that DONRUSS I’d been dreaming about getting my idol’s autograph on it.

Dad treated the Red Boat as if it were in better condition than it was: he always parked in the lot’s least crowded section. So we pulled in the Holiday Inn and drove around back.

“Holy cow, boy. That’s him. There he is,” dad said, pressing the Red Boat’s brakes, causing the tires to let out a little scream. “There is Mark Grace.”

Mark Grace was standing at the hotel’s back door, lighting a cigarette. The screeching of tires must have alerted him to us because Grace looked in our direction, inhaled, and turned away.

“What are you waiting on?” dad said. “Here. Take this pen. Let’s get that signature.”

I slowly stepped out of the Red Boat. Dad more or less jumped out. We walked to the Cubs cigarette-smoking, leather-coat wearing, left-handed first baseman. As we neared Grace, I removed the DONRUSS from the protective plastic, held it out to him.

“Sorry, kid,” Grace said, “you’re going to have to wait in line like everyone else.”

“Oh, come on Grace,” dad said, “We’re here now. How about an autograph for the boy?”

“Mister,” Grace said. “Right now I’m having a cigarette. If your kid wants an autograph, he’s going to have to get in line with the others. And I’m only signing things that are cleared through the guys inside. It’s in the contract.”

“Bastards got you by the balls, eh?”

“I’m just saying. Bastards bring you here and control which kids get your autograph? If you ask me, sounds like a pimp arrangement.”

Grace inhaled deeply. Smirked. Looked at dad. Exhaled through his nostrils. “I think we’re done here, mister. And you better just send the kid through the line. I don’t want to see your face inside.”

“Listen. Here my boy asks for an autograph, that’ll take you just a second, and you get high and mighty.”

Grace was turning away. He said, “Mister, we’re through.”

“You’re gonna get high and mighty? Do you know who I am?”

Mark Grace turned back. He looked at me, seemed to take in the look on my face like batting signs from the dugout. He looked at dad and said, “I could care a-good-fuck-less who you are so long as I don’t see your face inside.”

Grace squashed his half-smoked cigarette in the ashtray at the hotel entrance, pulled open the door, mumbled something, and walked inside.

The drive south was quiet. As we approached home dad reached over, grabbed my thigh, and said, “I could use some greasy grub. How about a Big Mac?”

The Red Boat pulled into the McDonald’s drive-thru. Ahead of us on a Ford F-150 was a black bumper sticker with white block lettering that read, “SHIT HAPPENS.” Dad looked at me and said, “You know boy, sometimes life doesn’t go your way, but don’t let today color your view on Mark Grace. He’s a good ballplayer, even if he is an asshole.”

Dad shifted the Red Boat to reverse, used the rear-view mirror as a guide, and backed into a spot. “We’ve got plenty of time before your mother expects us,” dad said, “Let’s go eat inside. I’ll get you one of those apple pie things and tell you about the time I met Stan Musial. A true gentleman.”

Peter Witte has never met Mark Grace, but he did watch him play many games in the Friendly Confines of Wrigley Field. This is his first fiction publication.

Samara Pearlstein (illustration) is an MFA candidate at the School of the Museum of Fine Arts in Boston, where it's a little weird to draw stupid cartoons, although it's ok when they're about Zizek.  More of the baseball stuff can be found at Roar of the Tigers.